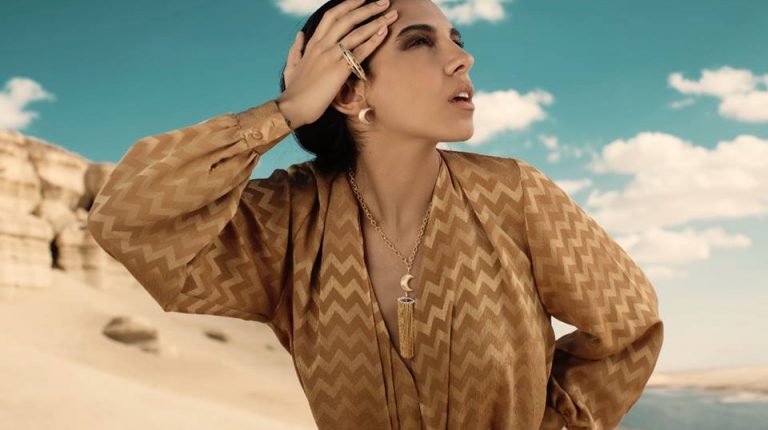 In the old times, long before the internet and smart technology, travellers with minimal equipment used to bid their farewells to family and friends before venturing into long journeys. For days and nights, they would forget the skill of communicating with humans and let the stars above lead the way.

While the nights got colder and lonelier, their faith in the sky would only grow stronger; letting the vast blanket spread to console them. With new inventions emerging every day, the similarities between those from the east and those from the west only dwindled, leaving two sides of the world with no common ground. 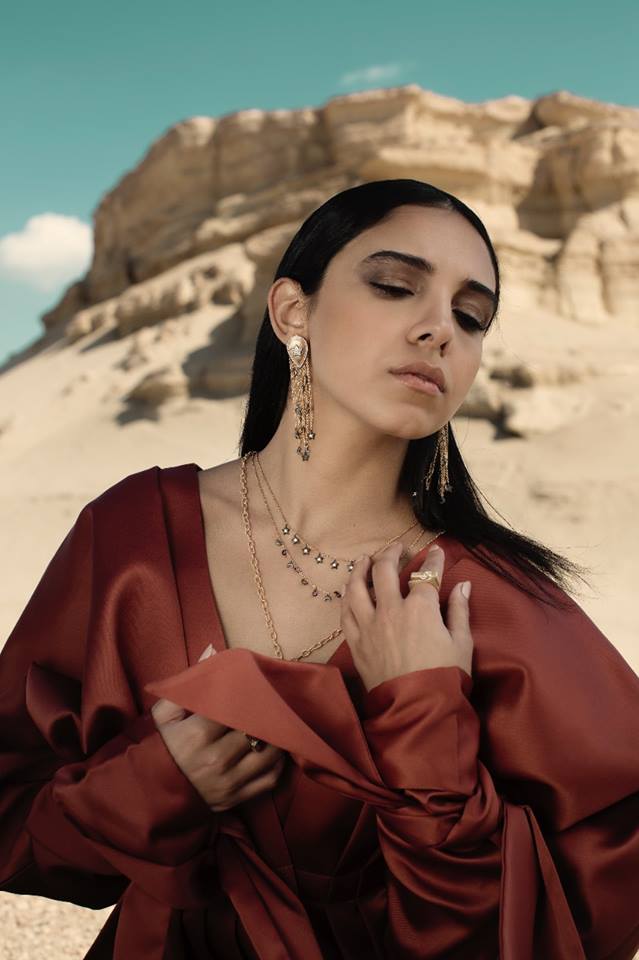 Jewellery designer, Amany Shaker, is a woman of two homes and a firm faith in communication. As the pollution of modernity is only obscuring the skies above the world’s biggest urban cities, Shaker is relentlessly keen on inching the cloak aside. Ammanii is Shaker’s method to converse with an international audience of strong and well-powered women.

“Starting this jewellery brand was driven by the desire to create something that can connect my background as a Middle Eastern woman with my present in Los Angles, California,” she said. The designer added, “I wanted to create something that can represent the positive aspect of our heritage and introduce it to the other part of my world; the states.”

Inspired by her drive to leap above cultural barriers and bring the far ends of the world closer, Shaker is always intrigued by symbols of unity and strength. For her first collection in Egypt, she looked for designs that would require no translation.

“At the end of the day, Ammanii is a wearable and artistic method to offer a glimpse of the Middle East and the strong women that live in this part of the world; it is a peek that should intrigue people to learn more,” said Shaker.

Sa’maa (the sky) is the designer’s latest ode to the shareable emblems of life. Like an author, Shaker is always keen to make each design a skilful storyteller. Meanwhile, the collection collectively features common ties and interrelated interpretations embraced across all cultures.

“My new collection is a great example of my design aesthetic. It is celestial; it revolves around the moon, stars, and the sky above us all. I wanted it to be a homage to the blanket that covers humanity. Whether you are in the east or the west, you are still covered by the same sky,” the designer explained. “You do not get an extra piece because you come from a different background or believe in a different religion or have a different skin colour. It is a universal blanket that knows no such thing as discrimination.”

Along with the cosmic motifs, the collection also showcases a number of distinctive eyes. According to the woman behind it all, they are not meant to be evil eyes; instead, they are eyes that protect. The guarding concept is a result to the designer’s conviction that despite the differences found between religions, everyone believes in a loving power that watches over humanity.

“To me, this was a common theme, which everyone could relate to. On the other hand, I also wanted to focus on women and send them messages of empowerment through this theme. Women share many similarities with the sky; they are the mothers, sisters, friends, and providers that protect, watch over, and love,” added the designer passionately.

Despite leaving Egypt over 30 years ago, the designer has kept strong ties with her hometown. Through regular visits, she was able to comprehend the similarities as well as the contrast between the two worlds. In parallel, she was also able to understand the difference between establishing a brand on either side. 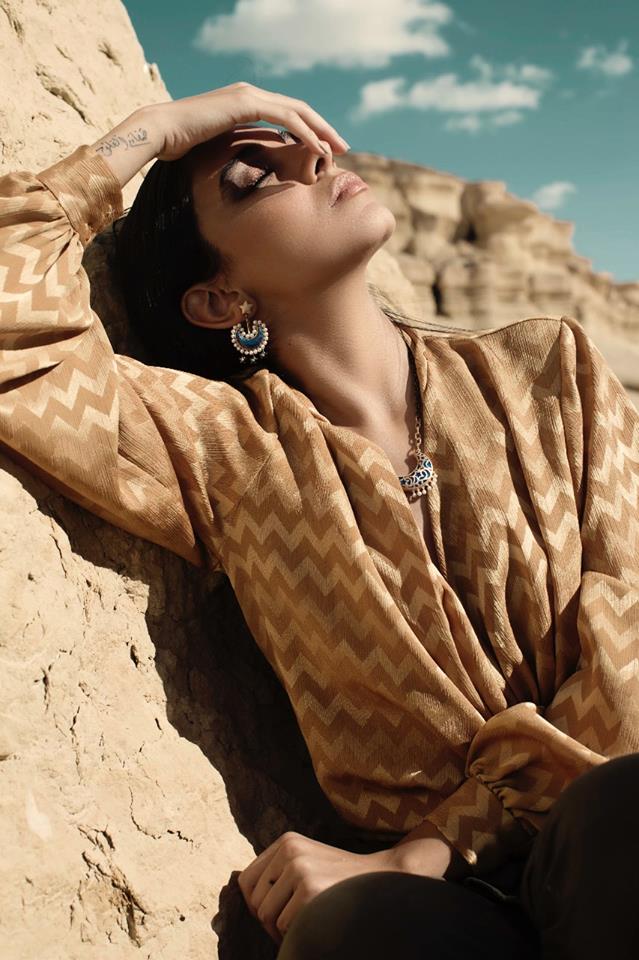 “Every few years, I contemplated if it was time to come back. However, it was only now that I felt like it is time to connect the dots again. I am a young brand in the Egyptian market; however, I have been around in LA for a while and thankfully, it was very successful,” stated Shaker.

The move indicates a new milestone for the brand as Ammanii’s constellations are finally capable of circulating a new orbit. Meanwhile, the cross-cultural designer also seeks introducing her brainchild to those who would appreciate the stories before the intricate designs.

In addition to the universal aesthetic, the brand also maintains a strong rapport with a third part of the globe: the Far East. Due to the intricacy of the designs, Ammanii is manufactured in Hong Kong, where they use the highest technology in jewellery making.

“Trying to find the right manufacturing factory is a process on its own. Initially, I wanted someone that can understand the story or even have a connection with it to manufacture the jewellery. However, I cannot do that from a long distance,” Shaker said. She added regarding her future plans, “my goal is to actually start a small workshop here in Egypt, where I can manufacture all of the pieces. Nonetheless, that would require me to be present in Egypt, all the time.”

Enthralled by the history of Egyptian jewellery, the designer is often sad about manufacturing away from the country of the Nile. According to her, talking about local jewellery always naturally leads to iconic collections displayed at various museums around the world.

“It is not the accessory aspect of it that matters, jewellery has always had spiritual and social meanings. Therefore, for me to take all of that and ship it somewhere else is quite unfortunate,” said the designer.

Walking the same lines of her ancestors, Shaker depends on sterling silver to unravel her tales. Her choice is based on the historic fact that ancient Egyptians believed that the bones and frames of gods were made of silver while their skin was made of gold.

“To me, this was a mesmerising piece of knowledge. Silver is solid and it really represents women, it represents us. We are the foundation, we are the providers of life, and we are that frame,” explained Shaker with an admiring smile.

On the other hand, the brand also embraces the cutting-edge technology of micro plating. The advanced method steers away from the old method of dipping overnight, hoping that it would come out right.

With that said, the designer also uses several different colours: gold and black lanthanum, which is often used for its durability. The new technology allows mixing two colours, without jeopardising the integrity of either.

“This colour pallet is a signature that I plan to maintain throughout future collections. Simultaneously, all the finish and details, whether on the inside or outside, are equally important. I want people to grasp the value; it is affordable luxury,” concluded the designer while looking into her ring.

Usfuur: birds of a ‘cause’ flock together