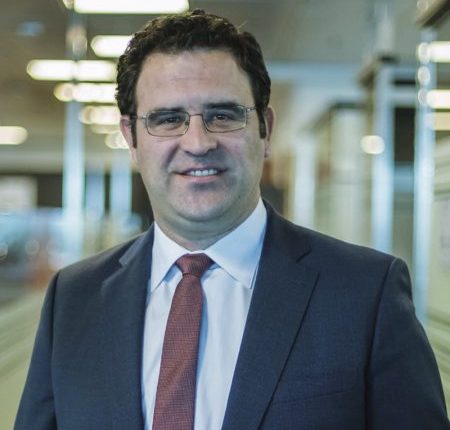 Arabian Cement Company (ACC) is not ruling out options including mergers and acquisitions (M&As) in two to three years to overcome fierce competition in the market, CEO Sergio Alcantarilla told Daily News Egypt in an interview.

“We are considering all options that could enable our company to continue its success story including seeking mergers and acquisitions to overcome fierce market competition,” Alcantarilla, speaking to Daily News Egypt at the company’s headquarters, explained.

Located in Suez Governorate, Arabian Cement produces approximately 5m tonnes of cement annually—10% of Egypt’s production—and was listed on the Egyptian Exchange on 18 May 2014.

The company is a joint venture between Cementos La Union, a Spanish investor holding the majority of shares, and a group of Egyptian investors. In less than 10 years in the Egyptian market, it has become one of the top performers in the industry, as it now owns the fourth-largest cement plant in Egypt.

New players will not badly affect the market

For Alcantarilla, the appearance of new producers in the market will not badly affect the market as demand is expected to be on the rise.

“Demand is on the rise and any new market player will not have a bad effect on the market. But the competition is getting fiercer,” Alcantarilla explained.

A $1.1bn cement plant with six production lines in the Egyptian city of Beni Suef will start production in March, adding to the nation’s bloated supplies, Reuters reported last week.

The project is starting at a time when Egypt already has excess cement capacity.

As of 2017, the country had 79m tonnes of annual capacity with a consumption of only 53m tonnes.

At least three cement firms reported losses in the third quarter of 2017 and national inventory now stands at 5m tonnes.

The new plant, 120 kilometres (75 miles) south of Cairo, is owned to Al Arish Cement Co, which in turn is owned to the Egyptian Armed Forces.

“In countries around the world, the cement industry is often seen as a bellwether. When it is performing well, it suggests an economy in full flow, and that is exactly what is happening in Egypt. The rising demand could explain how the economy is performing,” Alcantarilla added.

Egypt’s cement producers—which account for 3.7% of GDP, or EGP 60bn ($8.2bn)—have experienced mixed fortunes in the last few years, with some encouraging signs and promising long-term prospects alongside short-term turbulence.

Production slowed in the immediate post-Arab Spring era, before rebounding in 2013 and 2014, and seeing slower growth in 2015.

The country is well-placed to benefit from steadily rising demand in the medium and long term, although producers will need to ensure a stable supply of inputs, including energy, Oxford Business Group noted in a recent research note.

When the Central Bank of Egypt (CBE) unexpectedly announced the free-floating of the pound on 3 November 2016 to alleviate an ailing economy, the new rate was intended to serve as a move to jump-start the market. “It completely changed everything,” said  Alcantarilla. It exacerbated prices for imported goods, most importantly fuel and food products.

The CBE had devalued the currency to EGP 13 per US dollar, but the limit they fixed jumped on the very first day of real EGP trading. In the first week, it stabilised at EGP 18 per US dollar, which is roughly where it still sits today.

Like many companies in Egypt, ACC suffered greatly from the Egyptian energy crisis, although it was lucky to see it coming early enough and was the first company to invest in coal conversion metrics “even when there was no law about solid fuels in place because there was no stable government in the country,” Alcantarilla explained.

“I had many contacts in companies such as BP, BG, Eni Group, and Apache who knew of the problem, could see that the gas shortage was coming, and that it was going to last for more than three years. We decided to go ahead with investments in coal conversion. So in 2014, when the Egyptian government started a strategy for phasing out energy subsidies and issued regulations about coal, we already had installations in place to start consumption,” he said.

Alcantarilla continued, “this gave us a competitive edge. All of our competitors started at this point when we were ready to consume. We struggled immensely in the first six to 12 months, as there was no experience in Egypt about producing cement with coal. However, after the normal learning curve, we stabilised our operations.”

Looking to the future

In the aftermath of the energy crisis, reducing dependency on fossil fuels and researching all fuel alternatives available on the market became a priority. Substitutes such as rejects from municipal solid wastes, dried sewage from water treatment plants, and agricultural waste were all considered.

This push to put additional effort into improving its energy performance saw ACC partner with the United Nations Industrial Development Organisation (UNIDO) through the industrial energy efficiency programme where it received support in the implementation of the energy management system (EnMS) complying with ISO 50001. In May 2017, ACC was selected out of 37 entries to receive the Award of Excellence in EnMS from the Clean Energy Ministerial (CEM), a high-level global forum that promotes policies and programmes to advance clean energy.

Alcantarilla’s medium-to-long term goal for the company is to take steps both horizontally—expanding into other regional markets—and vertically by expanding ACC’s range of products and services to satisfy growing local demand.

“There is also always room for customer service: without customers, we can do nothing,” he said. Alcantarilla plans to enlarge ACC’s subsidiaries, set up procurement initiatives, and increase local supplier numbers.

“We can eventually substitute imported products for locally manufactured goods, as we are currently quite dependent on imported products,” he said. Along with the company’s strong relationships with suppliers built on shared experiences, collaboration, and transparency, Alcantarilla points to the importance of “always being aware about what to do, what other people are doing, and what the trends are to improve things.”

When asked what the best systems he has applied so far are, Alcantarilla revealed, “we implemented a way to measure everything that can be measured. We assessed guidelines related to health, safety, and production processes—with much focus on energy consumption. And the recent EnMS award is testament to our success in energy management where we calculate each unit of energy consumption in the plant.”

Decision-making is inherent in a CEO’s role, but the fulfilment and solution-making process is what sets ACC apart from its competitors.

“We are very flexible and very fast in making decisions. This is something few of our competitors have. The underlying culture here in Egypt is very centralised; everything has a core, like a boss, where that one person makes all decisions. So, it takes time to reach this person,” Alcantarilla said.

He added, “here at ACC, it is a little more decentralised. In multinational companies, they cannot make their decisions straightaway without consulting the parent company or other entities. At ACC, we have a distinct advantage, as we are able to act quickly.” The company had a successful comeback after the 2016 floatation: once the Egyptian pound was floated, ACC was trading the following month.

“We were the first company to start exporting cement. And today, six months after the floatation, although the market here has fallen 10%, ACC succeeded in keeping its total sales volumes. This was thanks to its more than 40% market share in cement exports from Egypt. The company has so far exported cement to Libya, Yemen, Kenya, Madagascar, and Somalia,” Alcantarilla said.

“We have built a reputation as a very serious company that consumers are happy to work with—we are the company people like to use,” a clear measurement of success, he said.

Arabian Cement said recently it has been in a partnership with Nahdet El Mahrousa organisation to start a new phase of its social startup programme: Khaleeha Suessi.

The new phase launched under the name “Sketch Your Idea – Khaleeha Suessi”, aimed to support young people from Suez governorate who are willing to explore the world of entrepreneurship and startups.

The objective was to introduce attendees to an intensive ideation programme of 32 training hours including one-on-one consultations to define and refine the team’s ideas and business models, educate them on how to build functional prototypes and test them, and at the same time, create a pipeline for current and future startup programmes.

“Our main objective when we first launched Khaleeha Suessi was to develop a platform through which we can empower promising entrepreneurs to realise their potential,” said the ACC CEO .

“As such, adding this new phase and offering initial guidance to the youth was a much-needed step to provide them with the insights and skills required to develop a realistic, applicable work model,” Alcantarilla said.

“Sketch Your Idea” competition witnessed the participation of 40 entrepreneurs, and 19 different ideas within the sectors of waste management, renewable energy, sustainable agriculture, and food production.

The sectors were pre-identified as high priority ones following business opportunity mapping and field research that was commissioned by Nahdet El Mahrousa. By the end of the competition, six ideas were awarded with a EGP 10,000 to EGP 15,000 grant to further develop their prototypes. This phase also placed entrepreneurs on a fast qualification track for Khaleeha Suessi’s main programme.

“Supporting and guiding potential entrepreneurs in building their ideas secures a pipeline of qualified nascent startups that are capable of reshaping the economic and social environment in their governorates. Our long-term partner, Arabian Cement, continues to support the Khaleeha Suessi programme to help guide the youth of Suez as they explore their potential as future entrepreneurs. In partnership with Cleantech Arabia, we identified numerous business opportunities in Suez. Through the Sketch Your Idea competition, youth transformed these opportunities into potential business opportunities in Suez. We are hoping that using all these tools will inspire and equip Suez entrepreneurs to launch their startups” said Jackie Kameel, managing director of Nahdet El Mahrousa.

Khaleeha Suessi’s first round that ended in 2016 received a total of 70 applications, 15 of which were shortlisted for the validation phase, and six were granted admission to the programme.

To date, the six selected startups have a total of 18 employees and worked with 3,830 clients in their respective fields. Moreover, three out of the six winners were recognised as promising startups during the entrepreneurship conference that took place at the Syndicate of Engineering in Suez, while the other three received a grant to attend El Rehla boot camp for entrepreneurship in Sinai.