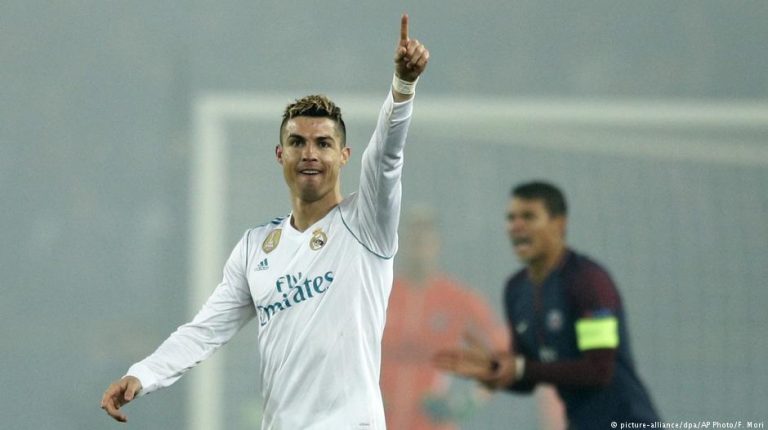 Cristiano Ronaldo opened the scoring as Real Madrid cast aside a disappointing Paris Saint. Germain side to reach the Champions League quarterfinals. Liverpool will join them in the last eight after they saw off Porto.Paris Saint-Germain (2) 1 – 2 (5) Real Madrid
(Ronaldo 52′, Casemiro 80 – Cavani 70′)

They were without Neymar, they may well soon be without Unai Emery and Paris Saint-Germain will remain without a Champions League trophy after a tepid surrender from the French underachievers on Tuesday night.

The first half was high on intensity but only offered real quality in flashes. Alphonse Areola kept PSG in the game early with an excellent reflex stop from a close-range Sergio Ramos effort, before Kylian Mbappe and Karim Benzema both spurned decent opportunities.

Cristiano Ronaldo spent much of the opening period protesting various perceived injustices but got involved in a more positive fashion after the break. With the smoke from the PSG fans’ pyrotechnics still hanging over the pitch, the Portuguese star powered home a header at the back post to make his side’s comfortable position impenetrable. In the process he equalled the record for goals in consecutive Champions League matches, with nine. Those nine games have brought 14 goals.

The latest effort owed much to some excellent work from two of Real’s less-heralded talents. Marcos Asensio dispossesed Dani Alves before combining brilliantly with Lucas Vasquez, who stood one up at the back post for Ronaldo.

The Parisian fans tried to lift their players but four goals in just over half an hour was the tallest of tasks. It became gigantic just after the hour mark when Marco Verratti vented his frustrations at the referee and received a second yellow card.

They got a fortuitous helping hand when an attempted Casemiro clerance cannoned off Edison Cavani’s leg and dribbled in after 70 minutes. But the Brazilian didn’t have to wait long to make amends when his strike looped in to the PSG net courtesy of a huge deflection.

In truth PSG got what they deserved. One of the pre-tournament favorites for the competition created little of any real note against a Real Madrid side who, in the first leg at least, were at a relatively low ebb. But Zinedine Zidane’s men are the holders for a reason and, despite domestic travails, they will be fancy their chances of a hat-trick of titles.

Liverpool will join the Spaniards in the draw for the last eight on March 16 after a stunning first leg performance allowed them the luxury of cruising through the home leg on Tuesday night.

There were no such fireworks in the first half at Anfield with neither side producing a shot on target in a tepid 45 minutes. The second half was a little brighter but Iker Casillas managed to keep Liverpool at bay, despite Salah’s introduction. But it mattered little and few sides will be keen to draw Klopp’s confident outfit in the quarters.