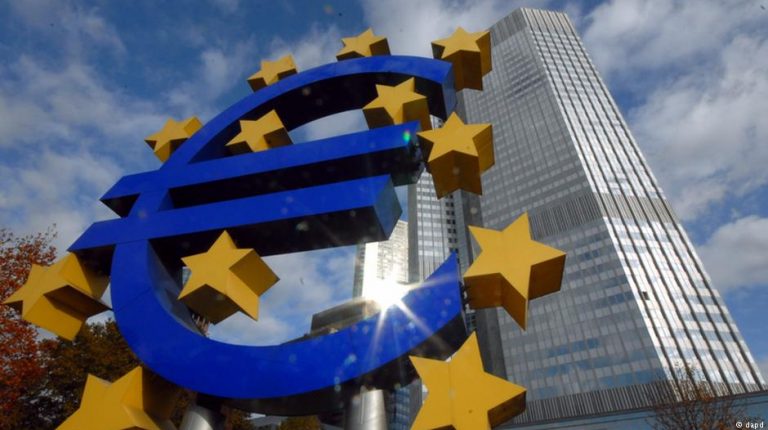 ECB governors have signalled greater confidence in the eurozone economy following a meeting of the central bank’s rate-setting council. Policymakers dropped language of boosting the ECB’s massive bond-buying program.Fears of a transatlantic trade war and political deadlock in Italy did not deter ECB policymakers from the strong hint that the end of their support for the 19-nation single currency area is drawing closer.

In a statement following an ECB governing board meeting on Thursday, they no longer mentioned that the central bank for the euro area stood ready to increase their €30-billion ($37.1-billion) per month asset-purchasing program “in terms of size and/or duration” should the global outlook become less favourable. The phrase had been included in every communique since December 2016.

The euro surged immediately after the statement had been published as currency markets regard this as a first cautious step by the ECB along policy normalization.

Along with historic low interest rates, the bond-buying scheme, also known as quantitative easing (QE), is designed to stoke economic growth by pumping cash through the financial system, helping boost inflation to the ECB’s target of just below 2.0 percent — seen as most favourable for long-term growth.

The ECB has bought more than €2.3 trillion of government and corporate debt since launching the stimulus program.

GDP expansion in the 19-member euro area indeed surged to 2.3 percent last year, but consumer prices have remained below expectations.

In December, the ECB forecasts called for inflation to hit 1.7 percent by 2020, still slightly short of the ultimate goal.

“Our mandate is in terms of price stability. Victory cannot be declared yet,” ECB President Mario Draghi told a news conference.

Draghi unveiled a modest upgrade of the ECB’s eurozone economic growth forecast to 2.4 percent from 2.3 percent previously, with projections for 2019 and 2020 unchanged at 1.9 percent and 1.7 percent respectively. “Incoming information, including our staff projections, confirms the strong and broad-based growth momentum in the euro area economy, which is projected to expand in the near term at a somewhat faster pace than previously expected,” he said.

With US President Donald Trump due later on Thursday to hold talks over planned new steel and aluminium tariffs, Draghi cited “rising protectionism” as a risk to the economy. “We are convinced that disputes should be discussed and resolved in a multilateral framework, that unilateral decisions are dangerous,” he said.

Thursday’s positive signal may reflect discord on the ECB’s 25-strong governing council, made up of the executive board and governors from the 19 member states’ central banks. Minutes from January’s meeting showed policymakers who favour dismantling bond-buying faster in light of stronger growth are increasingly vocal.

They were boosted last month when board member Benoit Coeure judged that “in future, the eurosystem [of the ECB plus the national central banks] can retreat as a buyer” without unravelling easier financing conditions.

Analysts such as ING Diba Chief Economist Carsten Brzeski also believe that the ECB’s massive stimulus won’t be prolonged beyond the end of this year. “The end of QE [quantitative easing] is getting closer. The risk of deflation is clearly behind us, and the only question is how to moderate and implement this exit,” he said.