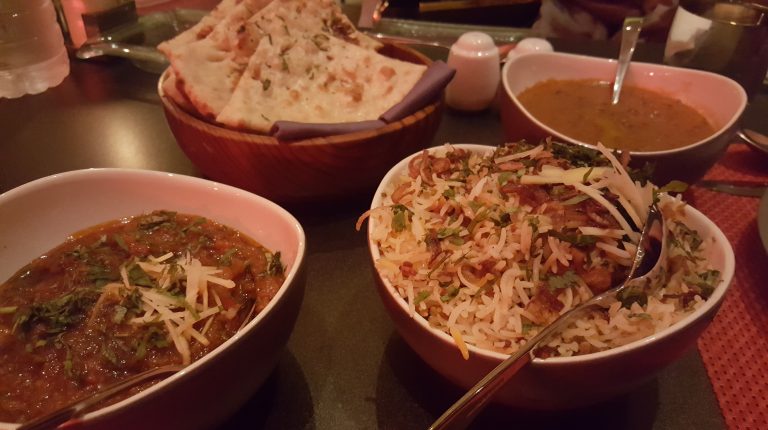 It was once said that food is a central activity of mankind and one of the single most significant trademarks of a culture, a saying that could not be more truthful when it comes to Indian cuisine. One of the most unique elements of the Indian table is that it successfully reflects the Indian nation’s culture, the diversity of the country, its shining colours and its enriching spices.

India Along the Nile is the most recent restaurant to open its doors to people for a short visit to the vibrant country, under the roof of the splendid Semiramis InterContinental Hotel.

Since Indian culture has been the fascination of Egyptians for a while, Indian restaurants have increased in number, successfully gaining a wide base of loyal, passionate Indian food enthusiasts. India Along the Nile kicked off with its soft opening just over three months ago.

The place’s atmosphere is quiet, relaxing, and warm. With dim lighting, huge mirrors, and soft music, it offers an aspect of calmness and peace. A view into a part of the kitchen, where bread is baked and appetisers are prepared, is also something to relish and provides amusement.

The restaurant is divided into two sections: the first is the food area, which is designed in a classical modern style with the dominance of a dark red colour and wood; and the bar and drinking area, where high small tables for those who would like to drink while enjoying quietness.

The staff welcomed us with a glass of lemon mint juice with added cumin, a drink that is widely known in India. Despite tasting odd at the beginning, the drink soon became one of our favourites.

The soup was very light, something that is intentional based on what the waiter said, because the following courses tend to be heavier and more spiced in the nature of Indian cuisine. The taste of chicken broth was pronounced in the soup, giving a splendid taste to the light-consistency liquid. As for the chicken balls, they were well seasoned, moist, and tender, perfectly matching the soup.

For the appetisers, we were advised to go with barra champ, Australian lamb chops char-grilled with a house blend of spices; zameen ke moti, which is fried spiced potatoes filled; a sort of golden fried ball filled with Greek yoghurt and fresh chopped onion; and murgh chandi chicken Tikka.

The lamb dish was the best the has ever tasted. Marinated for around 24 hours and grilled over coal, it left a mouth-watering, smoky taste that was truly remarkable. Medium-well cooked, the lamb perfectly had the juicy dark pink colour from the inside, with a roasted smoky-flavoured surface. We highly recommend this dish, and it is one of the most ordered, as the waiter told us, and the specialty of the head chef, Harish Tewari.

As for the fried yoghurt balls, it was our first experience to taste the seemingly non-matching, contrasting, yet incredibly delicious appetisers. As yoghurt hating individuals, the plate was not really interesting to us in the beginning. Nonetheless, with the high praise of the waiter, the team decided to give it a shot.

A few minutes later, we were very grateful to have ordered the plate. The shiny, golden crust from the outside was as tempting as the crunch of the chopped fresh onion inside mixed with the Greek yoghurt. According to Tewari, the balls are intended to be crunchy from both outside and in, which is why the white onions are chopped and left uncooked. Their sweet taste balanced the sourness of the yoghurt, and with the frying taste, it left each ball with a perfect savoury combination.

The fried spiced potatoes also presented a unique taste from India. The mix of mashed potatoes with tens of fresh herbs and spices, before frying them, was quite unique and different in taste than usual fried potatoes mixed with herbs, which we are used to covering with herbs after frying.

As for the chicken tikka pieces, the chicken chunks were marinated in silver. Ages ago, India used silver and gold to season chicken and to be marinated in, something that chef Tewari wanted to revive after people stopped doing so.

Despite the huge chunks, the chicken was juicy, moist from the outside and in. the seasoning was quite recognisable and tasty. Silver used to be thought to fight illnesses, while gold marinades were used to increase body strength.

Alongside the food, we ordered the special drink the restaurant offers, which is a fizzy drink made of a mix of fizzy water and herbs: rosemary, cumin, cinnamon, and several others. As hot as the weather gets after having a tonne of heavily seasoned food, the drink comes cold and refreshing. It can be served virgin or with alcohol, upon request.

For the main dishes, we ordered gosht dum biryani, a pot of lamb Biryani; jhinga dum masala (shrimp masala); and dal makhani, a plate of brown lentils with butter.

The mix of the three dishes’ colours represented India’s bright colours. The yellowish rice was dominated by the taste of meat broth, leaving it moist and delicate.

The shrimp dipped in tomato sauce was cooked with ginger and coriander. The mix of the three tastes was quite tasty and they went together well. The raw ginger added a spicy taste to the dip, leaving it all well balanced.

As for the lentils dish, it was cooked with butter, cream, and tomato sauce. With quite a bit of butter and sauce, the dish is definitely the farthest from a light, healthy meal. Yet, it is extremely delicious to the extent of not really caring about your diet or being fit for the moment. It is also a highly recommended dish.

The service of the place is luxurious, with waiters, chefs, and managers constantly checking if customers in need of anything. Waiters are very helpful and always seeking a way of suggesting to customers food that matches their preferences as well as offering the restaurant’s well-known dishes.

At the end, the high-end restaurant offers an up-scale atmosphere for customers to pamper themselves with luxurious Indian food that is, above all else, made with love.