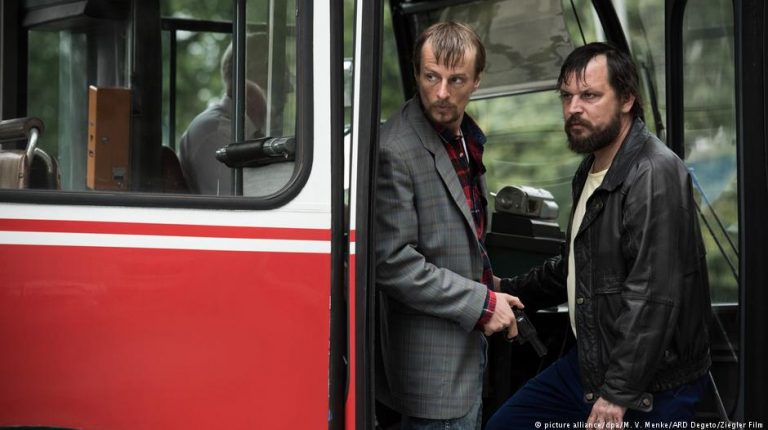 A new TV miniseries revisits the 1988 Gladbeck hostage crisis. Dubbed the “darkest hour” in postwar German media history, coverage of the event shattered the nation and redefined the rules of reporting.August 16, 1988: a hostage drama unfolds in the small Westphalian town of Gladbeck. Two robbers, Dieter Degowski and Hans-Jürgen Rösner, at the time 32 and 31, robbed a bank and fled with two hostages. Little did they know their crime would go down in German television history, for it was the first time ever that viewers would watch a criminal pursuit take place before their very eyes.

Journalists, who normally want to stand by and watch, were this time in the thick of the drama, even hindering police and conducting interviews with the hostage takers — a true first for German media. The US periodical Newsweek referred to the episode as the “Hans and Dieter Show.”

In pursuit of the best sound bite

By the end of the pursuit that saw Degowski and Rösner drive through Germany in a stolen bus, taking a total of 32 people hostage, photo journalists had all the time in the world to snap shots of the bus and the people inside.

Journalists fought for the best position from which to depict the events. Radio reporters let the hostage takers themselves give their take on how the situation developed, with one of the two gangsters saying at one point, “from here on I only want to speak through the media.”

Everyone in Germany — at least anyone with television or radio access — was able to follow the entire showdown live. A sense of excitement and fascination, horror and disbelief were palpable throughout the country.

Iconic photographs were taken of hostages being interviewed with guns held to their throats. One reporter even made his way into the getaway car to direct the hostage takers through the streets of Cologne — a city with which they were apparently unfamiliar.

That particular reporter faced harsh criticism for his actions after the affair, even facing allegations of complicity, but nevertheless he later became the editor-in-chief of Germany’s most-read tabloid, Bild.

By the time the drama had reached its end, two hostages were dead (including one of the female hostages who had been photographed with a gun held to her throat) and a number of others traumatized.

Was the media partly responsible for the disaster? Media psychologist Jo Groebel, for one, argues that the journalists who covered the affair not only satisfied the hostage takers’ desire for recognition and attention — they also “incited” the criminals to prove themselves in their brutal megalomania.

Critical distance in the smartphone era

Michael Konken, head of Germany’s largest journalists union (DJV), refers to the Gladbacker drama as “the darkest hour of German journalism since the end of WWII.” As a direct consequence, the national press council issued a number of reprimands and drew up tighter controls for the coverage of such affairs.

An ethical debate was also held in the media landscape itself, with several papers concluding that such coverage “should never happen again.” Today, it is illegal for any media outlet to conduct interviews with hostage takers while the crime is taking place.

But has anything really changed? These rules seem at first glance almost impossible to control in our modern era of digital reporting and social media. Nowadays, live streams on social media and photos taken by so-called civil reporters have blurred the distinction between eyewitnesses and professional journalists.

“It hasn’t become any easier to make the right decisions in the pursuit of responsible journalism,” Alexander Filipovic, professor for media ethics at the University of Münster, told DW.

“The Internet gives criminals all sorts of possibilities to get their message out there. In a way, the striving for public attention has become part of the crime itself.” This represents an “extreme challenge” for journalists, notes Filipovic, adding that the ability to “classify and assess” events is of utmost importance.

This ability, in Filipovic’s eyes, is based on “sound research, accuracy, and respecting the protection of victims and the accused.”

Dieter Degowski was recently released from prison in February. He took on a new identity and lives in an unnamed area, avoiding all publicity. Hans-Jürgen Rösner, who is seen as the brains behind the crime, is still in prison.

Nearly 30 years after the events, Germany is revisiting the entire drama through the two-part miniseries “Gladbeck,” aired by public TV broadcaster ARD on March 7-8.

The director of the miniseries, Kilian Riedhof, said he wanted to reproduce the “shock and powerlessness” he personally remembers feeling as the events unfolded at the time. “The Gladbeck trauma needs to be processed through our collective empathy,” he told press agency dpa.

Depicting the events from different perspectives — the press, the hostages and the police — the miniseries aims to get viewers to think, “what would I have done in their situation?” explained the director.

How would such a crisis have been covered today? The question inevitably follows the retelling of the events that captivated Germany 30 years ago. In the age of smartphones and live coverage on social media, the journalistic issues that arose through the media coverage of the Gladbeck hostage drama are still relevant to this day.