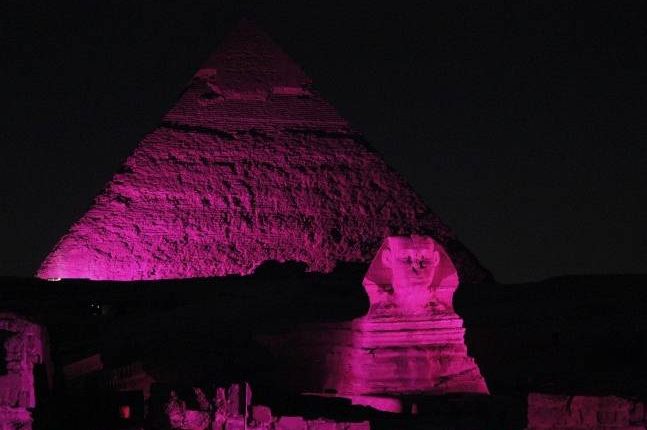 The eighth of March will bring together global governments, women organisations, businesses, and charities together under the banner of International Women’s Day (IWD), an event dedicated to celebrating to what extent women achieved success in society, politics, and economics. Meanwhile, the day has political roots due to strikes and protests that are often organised to raise awareness of continued inequality. The question is how will different institutions in Egypt celebrate this day.

Egyptian Pyramids to be illuminated in pink on IWD

The French Embassy and the French Development Agency (AFD) announced that France, in cooperation with the Egyptian Ministry of Investment and International Cooperation, will contribute to the pink illumination of the Pyramids of Giza on the night of 8 March, to symbolise the commitment of both countries to reduce gender inequality.

The embassy explained that the French Institute’s branch in EL-Monira district will organise anti-harassment workshops, with the aim of raising awareness and combating the sexual harassment.

The embassy will also provide the first prize for equality between men and women at the French Institute in Monira at a ceremony led by the actress Hind Sabri, in the presence of the Minister of Social Solidarity Ghada Wali, Beheira Governor Nadia Abdou, and the French Ambassador to Cairo Stéphane Romatet.

The prize, worth €7500, will fund an original initiative promoting equality between women and men. The award ceremony will be preceded by the presentation of some notable initiatives in 2017, including those supported by AFD.

France has also been financing for two years, alongside UN-Women and the Sawiris Foundation for Social Development, and under the auspices of the National Council for Women, the “Egyptian Women, Pioneers for the Future” programme, which allows girls to access training and employment in French and Egyptian partner companies.

Nazra discusses future of feminist movement in Egypt on 8 March

groups, which were formed following the 25 January revolution.

This celebration comes as part of the activities of the “Free Wave” campaign, that

is launched by Nazra in the period from 8 to 16 March, which coincides with the Egyptian

Among the speakers in the ceremony, Mozin Hassan, director of Nazra, Ranim Afifi, the editor-in-chief of Wlaha Wogoh Okhra Magazine, Hala Kamal, one of the founders of Women and Memory Foundation, and many other activists.

The Egyptian Cairo Opera House celebrated International Women’s Day and the Spring of Poets Festival through an evening ceremony that was held under the title of “Egyptian Female Poets” on 7 March at its small theatre.

Following this, an open discussion with the public was held about the aesthetics of poetry, as well as discussing the impact of the women in society and the most important issues that they face.

The Arab Women’s Organization (AWO) and Cairo University launched the first forum to combat violence against women under the title “The role of Arab Universities in Combating Violence Against Women” last Wednesday, on the occasion of the IWD, coinciding with 8 March.

The forum was attended by five Arab university presidents, with the participation of a number of presidents and deans in many Arab universities in Jordan, Iraq, Palestine, Lebanon, and Tunisia, as well as a number of people who are interested in women and gender issues.

The gathering aims to highlight the importance of the role of Arab universities in combating violence against women based on the experiences of the participating countries, and brainstorm about the mechanisms of establishing units to combat violence against women in Arab countries and the implementation of the joint action plan.

In the framework of the celebration of the International Women’s Day, critic Nahid Abdel Hamid, member of the National Council for Women, spoke in a seminar in El Sawy Culture Wheel about Egyptian women and their role in the development of society throughout different era in a seminar entitled “Egyptian Women on Their Day.”

Halaqet Wasl celebrates the IWD in cooperation with Baheya Hospital for early treatment and detection of breast cancer, and the Egyptian Food and Clothing Banks, on Thursday, where 150 women with success stories will be honoured.

The event will also include presenting a number of successful experiences of women with special needs and female cancer survivors.

Moreover, 20 sewing machines will be distributed for female breadwinners and five initiatives will coordinate the distribution of 4,000 pieces of clothing on Mother’s Day and Orphans Day.

Police hospitals opened their doors for women to have a free medical examination for three days on the occasion of International Women’s Day, Egyptian Women’s Day, and Mother’s Day.

Ministry of Social Solidarity to be lit blue for autism awareness