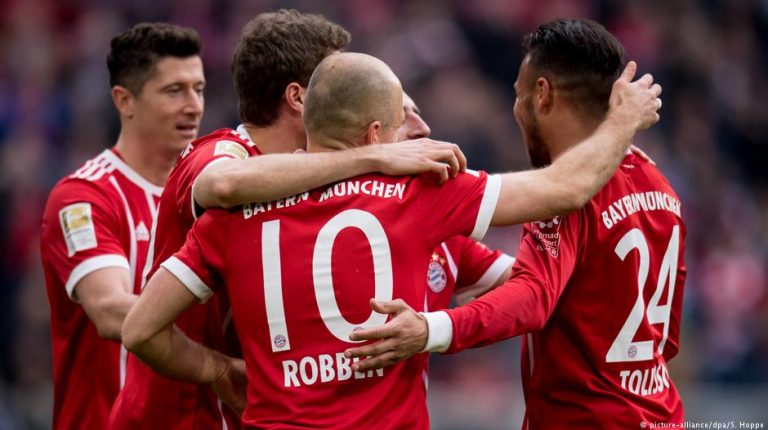 A pitiful Hamburg rolled over again in Munich as Bayern thrashed them 6-0. Impressive Augsburg beat Hannover 3-1 while Hoffenheim beat Wolfsburg comfortably. Freiburg will be happy with a point in Berlin.Bayern Munich 6-0 Hamburg
(Ribery 8’, 81’, Lewandowski 12’, 19’, pen 90’, Robben 55’)

Robert Lewandowski scored a hat-trick as Bayern Munich restored their 20-point lead at the top oft he Bundesliga with a crushing win over Hamburg, who remain seven points behind 16th-placed Mainz.

Franck Ribery broke the deadlock early, rounding the keeper and finishing well before two goal from Lewandowski — the first a header and the second a tap in — put Bayern three goals to the good inside 17 minutes.

The hosts were made to wait until the second half for their fourth, which came courtesy of a trademark Arjen Robben finish into the top corner from the edge of the box.

Ribery grabbed his second of the game late on when he cut in from the left and forced his way through a crowd of Hamburg bodies before finishing low into the far corner.

Lewandowski chalked up his hat-trick from the penalty spot, after sending his first spot-kick over the bar. But Joshua Kimmich was fouled and Lewandowski made no mistake the second time, completing the rout.

Hoffenheim secured back-to-back wins in the Bundesliga for the first time since September with victory over Wolfsburg.

The hosts led through Nico Schulz but Wolfsburg stayed in the game until Serge Gnabry drove into space on the edge of the box and drilled a low shot beyond Koen Casteels.

Hoffenheim quickly scored a third — an own goal after a ricochet off the unlucky Joshua Guilavogui — to sew up the three points, which sees Julian Nagelsmann’s side put the pressure on sixth-placed RB Leipzig.

Gregoritsch gave the visitors the lead with a header at the far post, but Hannover equalized in stunning fashion when Salif Sane rifled home a thunderbolt from distance.

Augsburg put their noses back in front on the stroke of half time when Gojko Kacar flicked a header home and Gregoritsch finished a scintillating counter-attack to put the result beyond doubt.

Mitchell Weiser had Hertha Berlin’s best chances as they were held to a draw by a dogged Freiburg.

Christian Günter had Freiburg’s best chance but he could only fire a long-range effort just over the bar.

Hertha have picked up just one win — against Bayer Leverkusen — in their last eight Bundesliga games, while Freiburg are now winless in three.

90′ GOAL! Bayern Munich 6-0 Hamburg (Lewandowski – pen)
The Pole makes no mistake this time after a foul on Kimmich. Hat-trick for Lewandowski and another humiliation for HSV. Just send them down now and put them out of their misery.

86′ PENALTY MISSED (Lewandowski – Bayern)
Papadopoulos fouls Thiago and the refere points to the spot – but Robert Lewandowski shoots over!

83′ GOAL! Hannover 1-3 Augsburg (Gregoritsch)
A fantastic counter-attack from Augsburg wraps up the points! Great combination play down the right wing involving Caiuby, Gregoritsch and Max. Finally, the latter crosses and Gregoritsch slots home his second of the afternoon. It’s Gregoritsch’s 11th goal of the season and Max’s 12th assist.

80′ GOAL! Hoffenheim 3-0 Wolfsburg (Guilavogui OG)
A calamity in the Wolfsburg box as Robin Knoche tries to clear but the ball rebounds comically off Guilavogui and into the net.

80′ GOAL! Bayern Munich 5-0 Hamburg (Ribery)
What. A. Goal. The Frenchman cuts inside from the left wing and beats one, two, three HSV defenders before slotting home Bayern’s fifth. Too easy.

77′ GOAL! Hoffenheim 2-0 Wolfsburg (Gnabry)
Mark Uth squares to Gnabry on the edge of the box and the Bayern loanee takes one touch to control, another to find a shooting position and a third to wrong-foot Casteels. A lovely goal to make it 2-0 and you can’t see Wolfsburg getting back into this.

76′ Big chance for Hannover! Jonathas (on for the disappointing Martin Harnik) has a free header only six yards from goal but heads over the bar! That really should have been 2-2.

70′ At the other end, Wolfsburg create their first good chance of the second half as Malli crosses to the back post but Didavi can only find the side-netting.

65′ Hoffenheim are looking to double their lead as Serge Gnabry attacks down the right wing. He squares the ball to Rupp who attempts to flick it on towards Kramaric but Bruma clears at the last minute and Wolfsburg survive.

65′ Tolisso has only been on the pitch since half-time but he’s had to be helped off the pitch with a problem to his left leg. He’s replaced by Sebastian Rudy.

57′ Hannover continue to push for a second equalizer. Fossum latches onto Füllkrug’s lobbed through-ball but his shot his blocked in the box – and Bebou completely mis-cues the rebound.

54′ Good save from Marwin Hitz! Ihlas Bebou feeds Felix Klaus but the Hannover forward can’t beat the Augsburg keeper and it remains 2-1. Meanwhile, Niclas Füllkrug is perhaps fortunate to still be on the pitch. He saw yellow for an unnecessary challenge on Daniel Baier but it could have been red …

55′ GOAL! Bayern Munich 4-0 Hamburg (Robben)
Substitute Corentin Tolisso (on for Arturo Vidal) looks like he wants to shoot but Arjen Robben takes over – and it was a good decision, as the Dutchman fires a left-footed rocket into the back of the net.

50′ A first sight of goal for Freiburg in Berlin as Christian Günter fires a long-range effort just over the bar. Hertha dominated proceedings in the first half but the visitors from the south have made a better start to the second half.

— KICK OFF —
The second halves are underway!

45′ GOAL! Hannover 1-2 Augsburg (Kacar)
Augsburg’s corner is cleared but only as far as Caiuby. The Brazilian pulls off a clever turn in the box before sending a cross-cum-shot towards goal which Gajko Kacar heads over the line! Two assists for Caiuby, the man of the match so far here.

40′ The latest chance for Hoffenheim as Denis Geiger sends Andre Kramaric through one-on-one with Casteels – but the Wolfsburg keeper does well to save. Wolfsburg have a chance to advance ahead of Mainz here after their defeat to Schalke but they don’t look like they want to take it.

37′ GOAL! Hannover 1-1 Augsburg (Sané)
Augsburg clear from a Hannover free-kick but the ball falls to Salif Sané on the edge of the box who volleys home spectacularly. What a finish!

31′ Goalmouth scramble in Hoffenheim! Serge Gnabry’s shot comes back down off the bar and Wolfsburg throw bodies in the way to block the rebound. They somehow survive and it remains 1-0 …

26′ GOAL! Hannover 0-1 Augsburg (Gregoritsch)
It’s been a fairly even start in Hannover but the hosts fell apart then. First, a long ball up field from goalkeeper Marwin Hitz finds Caiuby in acres of space on the left. The Brazilian sends a looping cross towards the back post where Gregoritsch, also with all the space in the world, heads home. Terrible defending.

23′ Hertha come close again! Lazaro crosses dangerously across the face of goal where Ibisevic gets a touch but can’t direct it over the line!

19′ Another chance for Weiser! The German U21 international shoots just wide of the post.

19′ Hertha Berlin have made a good start in the Olympic Stadium, the best chance so far falling to Mitchell Weiser – but Schwolow in the Freiburg goal got down well to his left to tip the ball around the post.

19′ GOAL! Hoffenheim 1-0 Wolfsburg (Schulz)
Serge Gnabry cuts the ball back and Nico Schulz is on hand at the back post to put the home team ahead.

8′ GOAL! Bayern Munich 1-0 Hamburg (Ribery)
Well, that didn’t take long. Franck Ribery dribbles into the box, dances around Mathenia and prods it home. The goal is greeted with a general shrug across Germany.

6′ After a crunching challenge on Robert Lewandowski from Douglas Santos, David Alaba sends a first free-kick sailing over the bar for Bayern.

— KICK OFF —
We’re underway across the four games

– With Bruno Labbadia, Wolfsburg are already onto their third coach of the season after dismissing Andries Jonker and Martin Schmidt. And having not won in six, they find themselves in a battle to avoid a second consecutive relegation play-off. In Labbadia however, they have a coach who has experience down the bottom – he saved Hamburg in dramatic fashion in 2015. They travel to inconsistent and unpredictable Hoffenheim.

– Hamburg are staring relegation in the face after failing to beat Mainz at home last week and today they face what many are calling a “Mission Impossible” away at champions-elect Bayern. In their previous seven visits to Munich, HSV have lost by a combined total score of 44-3.

– Guten Tag! Welcome to DW’s coverage of Matchday 26 in the Bundesliga. Today’s fixtures: