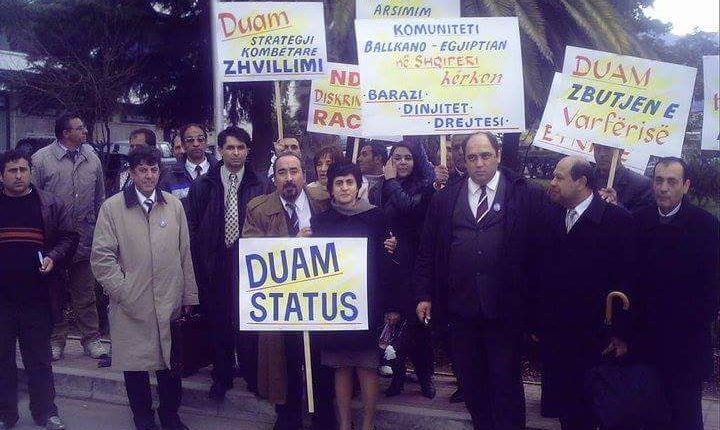 About 3,000 years ago, Egyptians travelled to the Balkan Peninsula during the prosperity and glory of the Egyptian empire. During the iron revolution, at the time of the 19th Dynasty of Egypt, the Pharaohs Seth I (1294-1279BC) and Ramesses II (1279-1213BC) sent Egyptian slaves to bring iron from contemporary civilisations such as Anatolia, the Balkans, North of Apennine, Cyprus, and Peloponnese.

Descendants of some of those Egyptian migrants are still there, distributed across the states of the Balkan Peninsula. The ancient Hellenic tribe from Peloponnese, the Dorian, had an Egyptian origin, according to the historian Herodotus.

“Using the description in the ancient Hellenic legend for Cadmus and Harmony, we can make a lot of connections between the Balkans and Egypt, and we can make a reconstruction of the migration waves of Egyptians in the Balkans, especially for those who are in the present territory of Albania,” said Rubin Zemon, an assistant professor of anthropology and humanities  at the University of Information Science and Technology (UIST) “St Paul the Apostle” in Macedonia.

He added that there are many preserved temples of Isis and other Egyptian gods throughout the Balkans, but the most notable ones are the temples of Isis in Lihnidos (Ohrid) and Heraclea (Bitola), as well as others on Albanian territory in Apolonia and other regions.

Throughout the past three millenia, the Egyptian community in the Balkans lived in isolated communities with no interaction with other communities of the society in their current countries, according to Zemon.

He added that Egyptians work different jobs, particularly in smithery, agriculture, and as musicians.

They are dispersed across Serbia, Macedonia, Albania, Kosovo, and Montenegro. They stopped using their ancestral language when they adopted the languages of the majority populations of their local regions. They now speak different tongues: Albanian, Greek, Serbian, Turkish, and Macedonian.

Although they have a long and ancient history in the Balkan Peninsula, the Egyptian community there suffers from discrimination. With the exception of the Albanian-majority country Kosovo, and recently Albania, countries in the Balkan Peninsula do not recognise the identity of the people who call themselves Egyptians.

The discrimination they face and not finding equal opportunities for work and education, as well as the ignorance of their identity, pushed Balkan Egyptians to mobilise and to team up in movements to defend their rights and identity.

Since the 1970s, Balkan Egyptians started to demand a separate Egyptian category to be added in official census statistics in their local nations. On 24 June 1990, the first assembly of one association of Balkan Egyptians was held in Ohrid, Macedonia, advocating the preservation and protection of their ethnic identity as Egyptians.

Albania lies in the southwestern portion of the Balkan Peninsula. “We are spread all over Albania even in the deepest villages,” said Ina Veizaj, who is one of the Balkan Egyptians in Albania. “In the main cities, we make up the majority. Tthese cities are Shkoder, Berat, Elbasan, Tirana, Korce, Tepelene, Gjirokaster Delvine Fier Lezhe, Durres, Pogradec.” But those people face hardship in their lives due to poverty and their usually large families.

Veizaj told Daily News Egypt that the Egyptian community in Albania is known by the state as a constitutional minority and for this, “we have come up with national plans for our integration, but these plans are not applied right and with justice.”

“We are organised in political parties and we have organisations. So far we have over 10 organisations and only two parties,” said Veizaj. She illustrates that the number of the Egyptian community in Albania reaches about 400,000 people of the 3 million population of the country.

“We know we are old and early and that we belong to the Copts,” she added. The Egyptian community in Albania does not face problems related to the culture, “culture in the south of the country is owned by us,” said Veizaj.

Regarding the Egyptian culture in her homeland (Egypt), Veizaj said that the number of Balkan Egyptian intellectuals who have knowledge about the situation in Egypt is few. “We know something about history and population, also a little information about the agriculture industry. In the meantime, for the current politics we hear only from the news but we do not study about it.”

The Albanian official position is that Egyptians “do not have their own language and can speak only the Albanian language. They have been integrated completely in the Albanian population and their only difference from the other Albanians is the colour of their skin” according to the PhD dissertation of Zemon.

Last year, Albania recognised the Egyptians as a minority, and in Serbia, they have a national council which is part of the government.

You can call Egyptian living in Kosovo the luckiest Egyptians in the Balkans. Egyptians in Kosovo are recognised in the constitution of the Albanian-majority country. They have their own political parties that are represented in the country’s parliament. The first Egyptian political party in Kosovo was established in 2001, New Democratic Initiative of Kosovo, and it has been representing the Egyptian community in the Assembly of the Republic of Kosovo (parliament).

In 2014, Veton Berisha, an Egyptian Kosovan politician established the Egyptian Liberal Party. The party has one member in parliament, two deputy ministers, and one adviser to the prime minister of Kosovo.

The party says it has many priorities for the Egyptian community in Kosovo, such as education, employment, housing, and access to health. “But as a political party, our main international goal is to work with the Egyptian government and to realise our aspiration as a community to be recognised by Egypt,” Berisha told Daily News Egypt.

According to Berisha the biggest difficulty for the Egyptian community in Kosovo is unemployment. Based on statistics from the World Bank, unemployment in Kosovo is at 40% and the unemployment rate among Egyptians is 90%. He added that Egyptians still face discrimination and hate speech, adding that many Egyptians do not challenge these issues in court because they do not trust the justice system in Kosovo.

From the last census in 2011, official statistics show that there are 11,524 Egyptians in Kosovo. But Berisha estimates the real number at up to 23,000 Egyptians in Kosovo, in addition to around 75,000 in diaspora, who were forced to flee during and after the war.

Speaking to Daily News Egypt from Tivat, Gjafer Brahimi, one of the leaders of the Egyptian community in Montenegro, said that the official number of his community is 3000 people. He believes the real number is bigger.

He added that they have formed an Egyptian organisation with special status in the state to defend the rights of the community. He also said they will soon establish an Egyptian liberal party in Montenegro.

Brahimi further explained that they are interested in Egyptian culture, especially since Islam links them more with Egypt as most of them are Muslims.

“We ask the Egyptian governments to recognise us,” Brahimi said.

Professor Rubin Zemon told Daily News Egypt that Balkan Egyptians in Macedonia are part of the so-called “other” communities, which means not mentioned in the preamble of the constitution of the Republic of Macedonia. According to Zemon, mentioning or not mentioning of the community in the preamble of the constitution generates discrimination on an ethnic basis in the enjoyment of civil and minority rights of the members of the communities living on the territory and are citizens of the Republic of Macedonia.

He further explained that members of the communities not mentioned in the preamble of the constitution are excluded from most of the rights enjoyed by the members mentioned in the constitution of Macedonia. According to Zemon, despite the normative part of the constitution for the “other” communities not limiting any rights, but through many laws and decisions, they are excluded, such as the law on official holidays in Macedonia, which was a decision of the government and members of the State Census Commission.
Zemon explained that Balkan Egyptians in Macedonia have a lot of difficulties and obstacles in everyday life, because most of them are not well educated and are mainly poor citizens, with limited access to social welfare and participation in public life.

Balkan Egyptians demand that the Egyptian government recognise them as Egyptians and to give them its international protection.

“The most important issue internationally for us is to be recognised by the Egyptian government,” said Balkan Egyptian Dzavit Berisha. Speaking to the Daily News Egypt from Romania, Berisha added that at a domestic level, they have a lot of work to do through human rights tools. “Balkan Egyptians still face big discrimination from the majority and I am trying to establish an international NGO in Kosovo and Brussels which will have three aims: research, litigation, and advocacy.”

Egyptian Kosovan politician Veton Berisha said that since 1989, after the announcement of the Egyptian movement in the Balkans, “our main goal was to be recognised by our motherland Egypt.” He added that they did not send any requests to the Egyptian government because “we had issues to solve in the countries where Egyptian communities live.”

Nour Al-Tamimi, responsible for the Balkan Egyptians file in the Egyptian government, told Daily News Egypt that he has been responsible for this issue since 2012. He added that he is conducting a study for the Supreme Council of Culture about the Egyptian community in the Balkans. He had several meetings with them, the last of which was held in Geneva between him and Veton Berisha.

“It is the first communication between Egypt and Balkan Egyptians since decades, and an Egyptian sovereign authority is highly interested in the issue,” said Al-Tamimi.