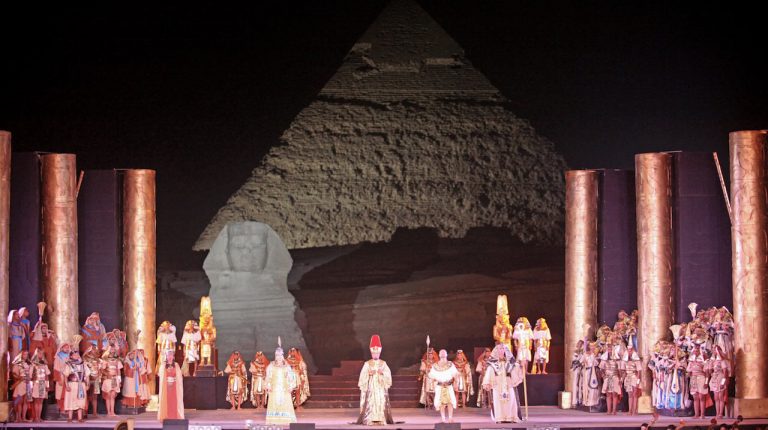 Yasser Shaaban, chairperson of SPT Tours, said that the costs of Opera Aida at the Giza Pyramids area amounted to EGP 13m, including 40% paid to Egypt’s Opera House, next to EGP 650,000 for the Ministry of Antiquities. The show was held on 7 and 8 March.

Shaaban told Daily News Egypt that the company encountered great difficulties in holding the performance at the pyramids area. The most prominent obstacles were the high performance costs in addition to the delay by the concerned parties in issuing the official approvals of the show.

How much did the show cost? What were the obstacles that your company faced in organising it?

The cost of the show amounted to EGP 13m. The Egyptian Opera House received 40% of these costs, which is very high.

The Egyptian Opera House alone got EGP 5m, including EGP 1m to sponsor the event, EGP 900,000 for technicians, EGP 700,000 for clothing and wages of artists and engineers, EGP 650,000 rent per day for the archaeological area, and EGP 250,000 for Misr Company for Sound, Light, and Cinema to compensate the cancellation of its events during the shows.

Are there other obligations besides the Egyptian Opera House?

The Ministry of Antiquities obliged us to pay EGP 20,000 a day during the period of construction of the theatre, which extended over 1,500 sqm.

It took about 20 days to build the theatre, which was equivalent to paying EGP 400,000, in addition to a similar amount during the removal of the theatre after the end of the run.

This cost added burdens to the company, which made it difficult for revenues to cover the costs of holding the show for three days, especially that the company bears the entire costs alone without support from any party.

The tourism and archaeology police were the most cooperative party with the company and involved the lowest cost, with the cost of insurance in full reaching EGP 10,000 for two days.

These were financial difficulties, but did you encounter difficulties with obtaining licenses?

Not only did we face financial troubles and high expenses, but the preparation and obtaining the necessary licenses took about six months, which reduced the opportunity to promote and market the event sufficiently before it was held.

The company addressed the parties concerned with its desire to organise the performance in mid-2017, but the approvals came in December 2017.

The fees demanded by the Egyptian Opera House were the biggest surprise for me. I was surprised during the signing of the contracts. The opera got EGP 5m, including EGP 1m to sponsor the event.

Will these high costs affect expenses and your future activities?

These high costs will force the company to contract with the Verona Opera or the Italian Bucharest Opera for upcoming shows.

Obtaining government licenses is very difficult, costly, and does not give all parties the opportunity to achieve revenues.

I hope the show revenues will cover the high expenses of about six months worth of work as well as the fees paid to the Egyptian Opera House.

It is not just a matter of short-term profit; SPT Tours works in the long term to promote Egyptian tourism and increase tourist flow from such activities, which will benefit both the state and the private sector.

The company aims to attract high-spending tourists during the coming period, in order to enhance the gains and publicity for Egyptian tourism.

The unexpected high cost of holding the show is a major reason behind limiting it to one day instead of three days as initially announced.

Making the show a one-day event forced the company to target 4,500 individuals compared to 1,500 attendees per day if it was held over three days.

The company has gained considerable experience in organising such events as well as marketing and promoting them in different markets, as international media published the news of the performance, which is also good marketing for Egyptian tourism.

Radio Classic in Germany launched a competition which included the selection of three of its listeners to win tickets to Opera Aida in Egypt, as well as all-day radio ads.

Do these types of events lead to reviving the influx of tourists to Egypt?

The performance led to the revival of bookings for hotels in the pyramids area during the period of the event. My goal is to deliver a clear message to the world that Egypt is a country of peace and security through the use of soft power.

Holding artistic events is good marketing for Egypt and for tourism, increasing the number coming here one year after another.

We launched a social media advertising campaign through the company’s own efforts and without any government support for the marketing of Opera Aida in Cairo.

We targeted the Japanese market in June. The marketing plan achieved remarkable success, and succeeded in attracting about 700 Japanese tourists to attend the performance within a short time.

The Japanese market has prompted the company to replicate the marketing experience for the performance in nine other countries: America, England, Canada, Austria, Switzerland, Germany, China, and Australia.

Targeting these countries is due to their interest in cultural tourism and the company specialises in attracting Japanese tourists to Egypt.

How do you see growth opportunities in terms of Japanese tourists in 2018?

The company targets new markets in the coming period, including the Italian, German, Dutch, and Spanish markets.

Japanese tourists accounted for 22.5% of total ticket sales for the show, followed by Germans with 11%, and Italians with 10%.

The number of Japanese tourists coming to Egypt during the past year reached 32,700 tourists with a growth of more than 70% compared to the previous year.

The company aims to attract 23,000 Japanese tourists by the end of this year, according to the company’s rate of increase in January compared to the same month last year.

I expect an inflow of 60,000 Japanese tourists to Egypt by the end of 2018, in the event of an increase in air traffic between the two countries.

Do you plan to hold new events this year?

The company intends to hold a 2019 New Year performance, for which we are choosing between the Temple of in Isis in Philae near Aswan or the Karnak Temple in Luxor.

The company has started to sign contracts with bands from inside and outside Egypt to play at the event.

The company also plans to hold the Isis and Osiris ballet on New Year’s Eve, but the show tickets will be low-priced compared to Opera Aida as the cost will also drop.

The cost of the performance will be between EGP 3m and EGP 4m, and is expected to return EGP 8m in revenues. The show will accommodate about 1,000 attendees.

The company also seeks to hold four main events each coming year, two shows for the solar alignment at the Abu Simbel Temple, a New Year show, as well as a performance for the Nile Flood Festival in Luxor, in addition to Opera Aida.