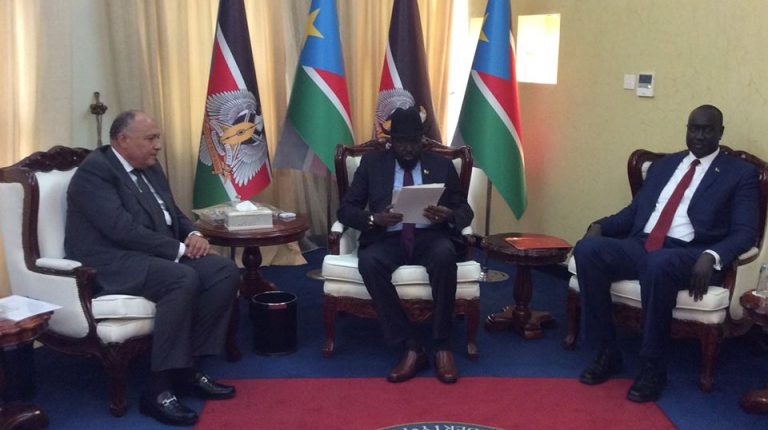 Also, Shoukry and the South Sudanese minister for presidential affairs signed a memorandum of understanding to establish means for political consultation between the two countries.

During the meeting, Shoukry asserted Egypt’s support for the peace process and achieving stability in South Sudan through the initiative of establishing a committee for national dialogue in the African country. Leaders of the committee have received training in Egypt recently, and an Egyptian expert is assigned to provide technical support for the committee in Juba.

For his part, Kiir expressed his appreciation for the Egyptian efforts to support South Sudanese people and stability of the state. He also briefed Shoukry on the results of the national dialogue committee’s work.

The meeting also addressed several regional issues of mutual interest, particularly updates of negotiations on the Grand Ethiopian Renaissance Dam (GERD) and the situation in the Horn of Africa, as well as the request of South Sudan to join the Arab League.

Abou Zaid pointed out that Egypt’s support to South Sudan began directly after the Comprehensive Peace Agreement was signed in 2005 between the SPLM and the Government of Sudan. Egypt has built four electricity stations, a large number of schools, and medical clinics in South Sudan, in addition to providing irrigation assistance, training courses, and medical convoys.

He pointed out that the visit is a favourable opportunity to follow up on the implementation of a number of cooperation projects, such as the establishment of fish farms, the inauguration of an Egyptian cultural centre in Juba, and the provision of training courses in security, education, health, irrigation, and diplomacy, as well as announcing new cooperation projects and programmes to support the South Sudanese people.

Juba is the first stop for Shoukry on a short African trip, which will also see him visit Kenya, aimed at strengthening bilateral cooperation with the two countries and consulting on a number of regional issues of common interest.