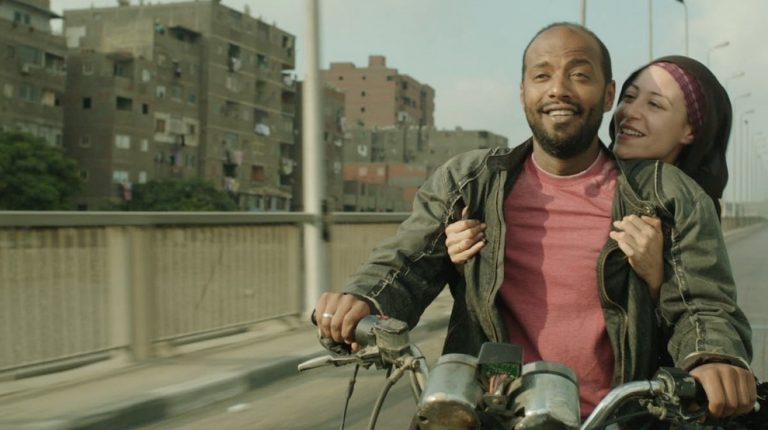 In Hala Khalil’s film that is written by Mourad Mustafa and produced in 2015, “Nawwara” starred by Mennah Shalaby should be asked one question, why have not you steal this villa earlier in the film?

Nawwara is depicted as a ‘moral good’ girl. She is living in an extremely poor and marginalized slum area, waiting to have her own place to get married to Ali played by Amir Salah Al-dien. Nawwara in her turn works as a servant in huge villa for a very elitist family that seems to be very close to the ruling regime that preceded the January uprisings in 2011. Despite of the huge difference between her life at home and the one of she witnesses everyday at the villa, Nawwara does not want to steal the latter. She is ‘honest’ and does not even think about losing the ‘trust’ of her employers.

In December 2009, the ruling National Democratic Party (NDP) won fraud parliamentary elections, of which the villa’s owner Osama enacted by Mahmoud Hemeida is a prominent member. However, Nawwara does not care. Few weeks later, the January uprisings erupted, but Nawwara still think just about her complicated relationship with Ali. She daily listens to the news about the protests in the streets in and outside Cairo from the radio of the bus that arrived her to the fancy gated compound in which the luxurious villa is located. Nonetheless, Nawwara does not pay attention because she just thinks about her grandmother’s health problems.

It can be argued, as a result, that Nawwara is dividing between her persona life and her job. Doing so, she is essentializing a hierarchy among them that ironically does not blame the villa for the misery of her slum area. Instead, Nawwara holds an imaginary that still convinces her to accept the crumbles that fall from the table of her Master to fund her basic needs and demands. Even when the latter escaped the country as they were worried to get arrested following the demise of the regime, Nawwara is still depicted as the ‘honest good’ servant, who even refuses to take the money that is left for her as an exceptional salary to look after the villa.

Nawwara’s false consciousness about the exploitation she experiences because of the presence of the villa is the main reason of her victimhood. She is a victim because she does not want or does know how to draw connections between her the place of her grievances on one hand and the other place that is the source of such grievances on the other hand. Cultural geographer Doreen Massey writes about the spatial concept of the node, which tells us about the importance of randomly linking spaces that seem completely opposite to each other. That is, for example, the rural area is not in isolation from the urban city. On contrary, the latter is a fundamental factor for the existence and the persistence of the former.

Similarly, Nawwara’s slum area together with all its absent public services are present inside the compound and the villa. Here, like the classic Marxist idea that urges workers to take over the factories to control the relationships of production, Nawwara is urged to take over the villa. All the circumstances just ask her to make this villa as her home. Finally, after many struggles that she encountered, Nawwara understands that she should ‘steal’ the villa. She realizes that her space of labor should not be differentiated from her shelter. Therefore, by the end of the film, she decides not to go home at the end of her working hours, but to invite Ali to the swimming pool and to the bedroom of the villa. Unfortunately, however, before possessing her former place of victimhood and exploitation by creating an exceptional romantic relationship with her beloved Ali inside the villa, Nawwara was arrested and accused of ‘robbing’ her Master. Symbolizing the ‘failure’ of the 2011 uprisings, “Nawwara” sadly reflects the story of many Egyptian victims who were once touched by that lovely revolutionary dream.