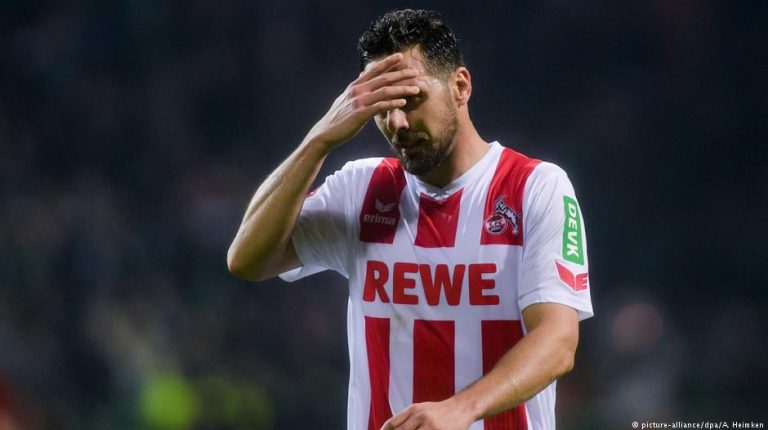 The scene was set for Cologne and Claudio Pizarro to instigate the start of a miraculous great escape. It was not to be, however, and now Cologne’s Bundesliga status looks as good as over, writes DW’s Janek Speight.Werder Bremen 3-1 Cologne, Weserstadion
(Veljkovic 33′, Rashica 58′, Eggestein 90′ — Osako 53′)

Leading into Cologne’s critical Monday night match against Werder Bremen, coach Stefan Ruthenbeck said his team would fight for every ball and weren’t scared by the challenge ahead of them.

“After all, we’ve felt like we were relegated 10 times already this season,” he said.

Following their 3-1 defeat at a rain-drenched Weserstadion, his players must surely feel like they’ve been relegated for an 11th time, and this one could be for good.

Eight points off Mainz in 17th, bottom of the league since Matchday 3, and with just eight games remaining, Cologne are running out of second chances. This defeat should be one of the final nails in the coffin.

In the first half, Cologne looked a shadow of the team that had claimed vital away wins in Hamburg and Leipzig this year. The players appeared daunted by the occasion, unable to make headway when safe in possession and prone to errors when put under pressure.

Passes went astray, Yuya Osako was helpless in controlling the ball, while both Marcel Risse and Jorge Mere were guilty of giving up possession in dangerous areas.

Even veteran Claudio Pizarro, accustomed to these big matches, was to miss a huge opportunity to become a hero late in the game.

Milos Veljkovic was allowed to ghost in at the far post during a corner and calmly slotted home unmarked. Cologne’s players remonstrated with referee Benjamin Brand, claiming Thomas Delaney had impeded Veljkovic’s marker Dominique Heintz in the build-up, but to no avail.

For a club that was denied a last-minute winner by the VAR against Hannover last month, it must have felt frustrating to be denied at least a video review. But when you’re down the bottom of the scrapheap, luck doesn’t present itself too often.

That disallowed goal against Hannover had been scored by Claudio Pizarro, the 38-year-old striker who became a legend in Bremen after scoring 104 goals for the green and white.

Ruthenbeck was clearly relying on Pizarro’s experience in this high-stakes game, and withdrew centre forward Simon Terodde at half-time to allow the Peruvian to flourish better alongside Osako.

On 53 minutes, the tactical change paid dividends. Pizarro, afforded too much time at the top of the box, appeared to move in slow motion as he played through Osako. The Japan international took the ball in his stride and rifled an unstoppable shot into the roof of the Bremen net. Cologne looked a different beast and the confidence was visibly returning.

The Bremen crowd was nervous, though, and every time Pizarro got on the ball it felt like destiny was pulling him towards a dramatic, emotional equaliser. He was given the opportunity to turn the game on its head on 76 minutes.

Marcel Risse, set free down the right-hand flank by Osako, floated in an inch-perfect ball, Pizarro rose high, unmarked, free as a bird, and poked his header agonisingly wide of Pavlenka’s post.

Bremen’s fans let out sighs of relief and then burst into song, serenading Pizarro for his poor marksmanship – a first for all involved. “I’m sure Claudio has scored that goal 100 times before,” Ruthenbeck lamented in the post-match presser.

As the clock ran down, Bremen added a third through Maxi Eggestein, sealing victory and surely putting them out of relegation danger. This team is now eight games unbeaten at home and have only lost one match in their last seven games.

For Cologne, it looks like the end of the road. Finally. Ruthenbeck and goalkeeper Timo Horn put on brave faces post-match, but it truly would be a miracle if they can avoid a drop to the second division.

They do have clutch games against Mainz (Matchday 29) and Wolfsburg (Matchday 34) to come, but they also face three of the top four teams before the season ends.

Ruthenbeck has done an admirable job revitalising the club since jumping on board in December, but it hasn’t been enough. While just one win in seven games may not reflect their performances, it’s the reality for a team that has failed to get the job done when it matters.