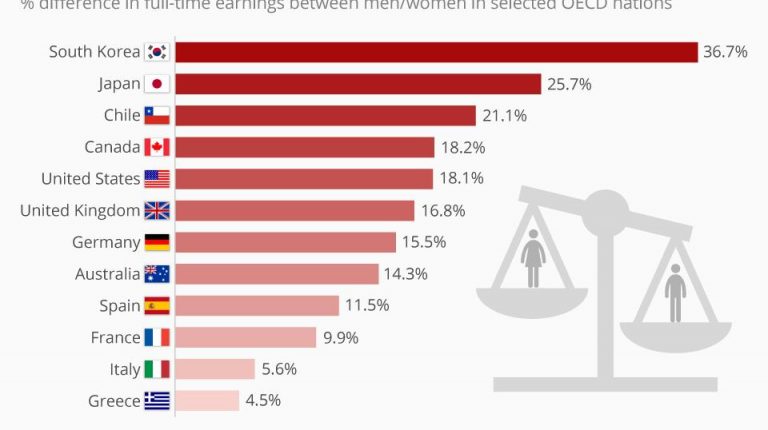 Everybody works to make a living, yet, it is not uncommon to look at the salaries of men and women and find a gap between their incomes that is hard to overlook, a phenomenon that has been occurring almost everywhere across the world.

In Europe, according to new data released during the first week of March by Eurostat, the statistics agency of the European Union, women on average earned 16% less than men in 2016.

“The Czech Republic, Estonia, and Germany reported the widest gaps although all three countries have seen them narrow in the last five years. With a widening pay gap of 21%, the UK ranks fourth, well above the European average,” The Financial Times reported.

The smallest gender gap was found in Romania and Italy, but according the OECD, these smaller gaps, especially in smaller economies, are often the result of what is known as the “selection effects”, as “only the more highly-qualified females tend to remain in the labour force.”

The gender pay gap has noticeably increased between 2011 and 2016 in countries such as Portugal and Slovenia. On the other hand, the most noticeable decreases were recorded in Romania, Hungary, Spain, Austria, Belgium, and the Netherlands. Overall, the gender pay gap has decreased by 0.6% in the EU since 2011.

In the United Kingdom (UK), women work for free more than two months a year as a result of the country’s gender pay gap, according to the Trade Union Congress (TUC), in a report published coinciding with International Women’s Day on 8 March. Based on the report, the TUC called upon the UK government to require employers to conduct audits and action plans to close the gap in their workplaces, The Guardian reported.

The Office for National Statistics (ONS) said that with all workers included, whether full-time or part-time, the gender pay gap is found to be 18.4%. “This means that women effectively work for free for the first 67 days of the year,” TUC said.

The 2017 Global Gender Gap report, published by the World Economic Forum, included 144 countries and attempted to show the magnitude of gender-based disparities, including those in incomes. The report’s findings said that the average progress generally made on closing the global gender gap stands at 68%. “This means that an average gap of 32% remains to be closed worldwide across the four Index dimensions in order to achieve universal gender parity, compared to an average gap of 31.7% last year,” according to the report.

In February 2018, Iceland announced that it is illegal to pay women less than men. However positive that sounds, this is the case in many countries where it is illegal to pay women less than men. “What makes the Iceland plan different is that the onus will no longer be on an employee to prove they are underpaid—which can involve years of court battle. It’s up to their boss to prove they are paying workers fairly as Iceland made it a criminal offence for employers not to take action on unequal pay. They’ve effectively made it like a health and safety violation,” the BBC reported, adding there will be a penalty for inaction which will trigger job evaluation schemes.

With hope on the horizon, there may be a chance for income equality soon and narrowing gender pay gaps over the few upcoming years as initiatives are taken by women across the world to demand equality in all life aspects.