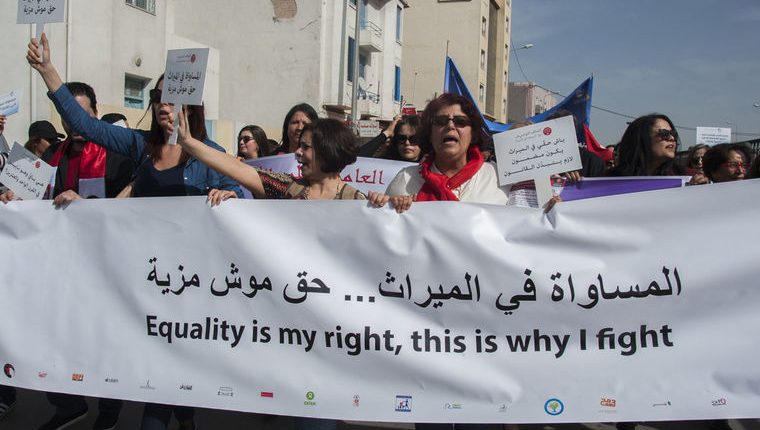 Dozens of Egyptian social media users, women and men, have changed their photos on social media channels with frames including slogans of “equality in inheritance is a right not a privilege,” and further expressed solidarity with issue through opinion posts and hashtags.

Calls of equality between men and women in inheritance have long been an issue of debate. Supporters of the issue believe that females continuously inherit less than men, which is something that exposed many females to facing injustice. Meanwhile, others believe that calls of equality are in violation of the Islamic religion’s provisions.

Islamic countries’ judiciaries determine issues of inheritance according to Islamic law, which determines its distribution in all cases, as it stipulates that if a family consists of one man and two females, the man will inherit 50% of the wealth and each woman 25%. If a family is comprised of two men and one woman, each male will recieve 40% of the inheritance and the female 20%. In some cases, brothers of the deceased will join his or her sons in their inheritance.

Discussions over equality in inheritance is considered a taboo subject in the Arab world, for being considered an attempt to change the consistency of the Islamic religion and a violation of the Holy Quran’s verses.

“Allah instructs you concerning your children: for the male, what is equal to the share of two females,” reads verse 11 in Surat Al Nisaa of the Quran, which was used to legalise procedures of inheritance between men and women and determined different percentages among inheritances.  Demands to modify laws’ provisions to provide equal inheritance to women was not only demanded in Tunisia, as it was further called for by people of other Arab countries.

In a phone interview with Yasmin Osama, a mass communications lecturer, said, “clerics have always stated that provisions of Islamic law are eligible for every age and time. I see that they did not succeed in changing things or providing reasons in ways compatible with today’s conditions. When you ask any cleric: why do men receive more inheritance than women, they always respond that men are the ones in charge of spending, which is, in fact, not always what is really happening.”

She continued, “we can perform changes based on the modern conditions and changes of society and statistics showing that there is a large percentage of females who are breadwinners.”

Osama gave an example that a son can receive a greater share of his father’s wealth, regardless of the fact that he could be already receiving a high income, while his mother will take the lesser share and will be dependent on assistance from her son, who may not be willing to support her.

“In such cases, the wealth may not be large enough to secure a wife’s life, particularly if she is living alone and may be in greater need of financial support. Similarly, for a man who has only has daughters, their uncles will join their inheritance,” Osama said.

When asked what she thinks is the solution, she said, “Although I am not be the best candidate to discuss Islamic Sharia, but still, religious scholars should do their best to provide logical reasons for banning equality.”

She added, “I believe that there should be practical laws that will guarantee equality, from a material point of view. I don’t think that, in this case, it can be against Islamic religious teaching, but an attempt to avoid unfair situations for females,” noting that in several villages in Upper Egypt, men believe that sisters don’t have the right to inherit and the men are the ones that are in charge of managing their money.”

Solutions start when people admit that everything can be discussed far away from phases such as “this violates Islam, this will change religion” and understand that there are no taboos, Osama concluded.

In August 2017, Tunisian President Beji Caid Essesbi expressed his support for the demand for equality between women and men in his country, and ordered a review of the laws of inheritance, which stipulate that men inherit double what women do. Also, the government set up a committee to prepare proposals that would allow women to give their children their family name and create equality between men and women in inheritance.

Tunisia has become one of the most advanced Arab countries in the area of women’s rights. In 2017, it lifted the prohibition not on Tunisian Muslims from marrying non-Muslims.

The decision was enthusiastically welcomed by various feminism groups who believe that families should have equal rights in inheritance to avoid being exposed to unfair situations by men in their families.

Women’s organisations in Egypt described the statements of the Tunisian president as progressive for women’s rights, and demanded finding solutions to be applied in Egypt, and discussed in a national social dialogue, in order to empower women.

The number of Egyptian families that are headed and supported by women has registered 34%, accounting for around 8 million families, according to a National Centre for Social and Criminological Research report released in November.

Previously, Hoda Badran, president of the Egyptian Women’s Union and the Arab Women’s Union, said in a press statement to Al-Masry Al-Youm that she strongly supports these demands, and that it was a courageous move by the Tunisian president, but difficult to apply in Egypt. However, women in Egypt have the right to compete with men in inheritance, especially that a majority of them are financially supporting their families.

On the other hand, Egypt’s Al-Azhar, the world’s most prominent authority on Sunni Islam, condemned the statements of the Tunisian president. “[The] concept of equal inheritance is against Islamic teachings. Equality in inheritance is unjust for women and is not in line with Islamic Sharia,” said deputy of Al-Azhar, Abbas Shuman, in a statement.

For Democrats to fly, they must unite the party's wings