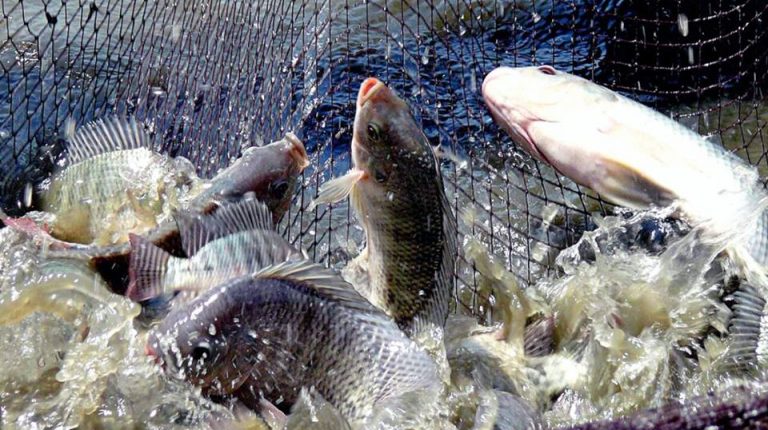 Scientists from the University of California, Irvine (UCI) expect that the world’s fisheries will lose about 20% of their productivity by the year 2300, with those in the North Atlantic down nearly 60% and those in much of the western Pacific experiencing declines of more than 50%.

In the study, which was published in the journal Science, UCI climatologists said that the extended climate warming will drastically alter wind patterns, boost ocean surface temperatures and melt nearly all the sea ice in polar regions. The resulting decrease in global fisheries is set to affect the entire world’s fisheries, including in the Mediterranean and Red Seas, where Egypt’s coasts lie.

Lead author of the study J Keith Moore, a UCI professor of Earth system science, said in the UCI statement that the conditions that result in climate change will cause changes in phytoplankton growth and ocean circulation around Antarctica, with the net effect of transferring nutrients from the upper ocean to the deep ocean.

According to the paper, there are three key factors driving increased phytoplankton growth around Antarctica. Those factors include the long-term warming trend in the oceans, changes in winds brought on by global climate warming, and most significantly, the near elimination of sea ice along the coast of Antarctica.

“Marine ecosystems everywhere to the north will be increasingly starved for nutrients, leading to less primary production (photosynthesis) by phytoplankton, which form the base of ocean food chains. Without the floating ice, which blocks much of the light today, you get increased photosynthesis,” Moore said.

Currently in oceans, nutrients are brought up to the surface around Antarctica but then move north and eventually flow into the low latitudes, supporting the plankton and fish populations there. The increasing in phytoplankton growth around Antarctica in the north will cause the transfer of nutrients to be greatly reduced.

According to the study, the key nutrients that support phytoplankton growth in the ocean include nitrogen and phosphorus. As these elements are increasingly depleted everywhere to the north, phytoplankton populations will decline and scarcity will be reflected on the food chain, ultimately affecting the fish that humans catch for food.

The researchers of the study used an empirical model linking plankton growth to present-day fish catches and then analysed in decreasing nutrients and plankton populations due to climate warming in the coming centuries.

“Combined with warmer ocean temperatures throughout the year, this leads to a longer growing season and faster plankton growth rates. Stronger winds drive increased upwelling, bringing nutrients to the surface, resulting in higher nutrient concentrations and more plankton growth near Antarctica,” Moore explained. He added that by looking at the decline in fish food over time, we can estimate how much our total potential fisheries could be reduced.

Moore, who helped in developing the Community Earth System Model (CESM) which is employed in this study, emphasised the importance of looking further into the future with climate models, something that is not often done because of the computational resources such modelling requires.

To reach their findings, Moore and his team needed months of computations using thousands of central processing units to simulate the climate and oceans up to 2300.

“The climate is warming rapidly now, but in the ocean, most of that added heat is still right at the surface. It takes centuries for that heat to work its way into the deeper ocean, changing the circulation and removing the sea ice, which is a big part of this process,” said Moore. “This is what’s going to happen if we don’t put the brakes on global warming, and it’s pretty catastrophic for the oceans. There is still time to avoid most of this warming and get to a stable climate by the end of this century, but in order to do that, we have to aggressively reduce our fossil fuel use and emissions of greenhouse gas pollutants.”

Meanwhile, in a move which is considered a step towards achieving Egypt’s self-sufficiency in fish production, President Abdel Fattah Al-Sisi inaugurated in November the first phase of Berket Ghalioun fish farm on an area of 2,750 feddans, costing EGP 1.7bn, in Metobas in Kafr El-Sheikh governorate.

The project, which is set to be the largest fish farm in the Middle East and North Africa region (MENA), was first announced in 2014 with a three-phase plan. It aims to use the latest advanced technologies to build a large fish farm on 12,000 feddans. The first phase of the project is expected to cover more than 70% of Egypt’s domestic consumption of fish.

Egypt, the largest country in Africa, is seventh globally in fish production, according to statistics of the Food and Agriculture Organisation of the United Nations (FAO). Egyptian authorities estimate the national fish production at 1.5m tonnes, according to the General Authority for Fish Resources Development.

The project was established in cooperation between the Ministry of Agriculture and Land Reclamation and the National Service Products Organisation (NSPO), which is part of the Egyptian Ministry of Defence.

Mostafa Amin, director of the NSPO, said during the inauguration that the project consists of a fish-shrimp hatchery on an area of 17 feddans with a capacity of 20 million marine fingerlings, 2 billion shrimp larvae, as well as a marine fish farm with a total of 453 breeding ponds, 155 incubating ponds (50 by 150 metres), with a production capacity of 3,000 tonnes of fish per each period.

The project’s productivity includes 83 ponds for mullet and tilapia fish, 655 shrimp ponds, and 168 incubators, added Amin. He also pointed out that the project is expected to provide 3,000 jobs for young graduates directly and indirectly.

Amin further said that the project includes a research centre on an area of 700 sqm, which consists of a laboratory for water quality, laboratory for healthy feed, unit for instructing and training, as well as a fish biology lab, and a lab for fish feed quality.

As part of its objective, the project has directly provided 10,000 jobs and will indirectly create 30,000 more jobs, according Sayed Nasr, governor of Kafr El-Sheikh governorate, in a statement. The second phase of the project will cover 9,000 feddans.

Another study, recently published in Marine Policy journal, revealed that financial aid allocated to fisheries in developing countries has declined by 30%. The study, carried out by researchers from the University of British Columbia (UBC) and Stockholm Resilience Centre, found that projects that focus on climate issues in fisheries had declined by about 77% over the five-year duration of the study.

Co-author Colette Wabnitz, research associate at UBC’s Institute for the Oceans and Fisheries and the Nippon Foundation’s UBC Nereus Programme, said that sustainable fisheries make good economic sense not only as a source of employment and regular catches, but also because of their nutritional value. In addition, investments in small-scale, sustainable fisheries could enhance climate change resilience and give vulnerable communities’ access to healthy feed while preserving traditional diets.

According to the study, fisheries and aquacultures supply 17% of animal protein and provide livelihoods to 12% of the world’s population. Research can improve understanding of the future impacts of climate change on fish stocks and link results from modelling work with on-the-ground monitoring and assessment efforts to improve adaptation strategies.