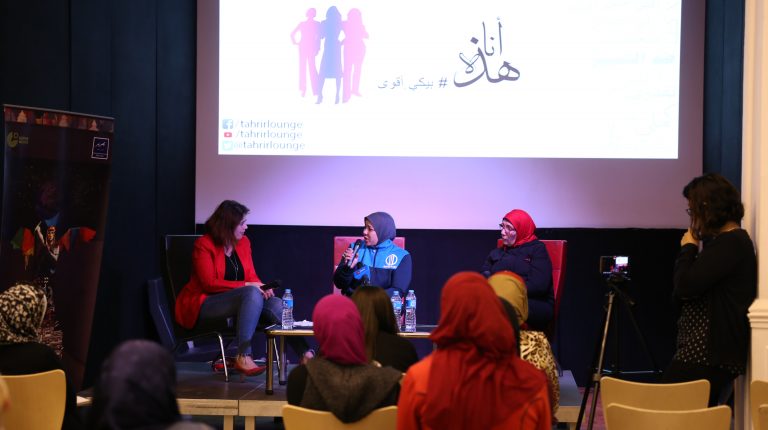 Tahrir Lounge launched on Thursday a new campaign under the title “This is me, by you I am stronger” to raise awareness of women in the workplace and the challenges they face and to shed light on successful female role models who overcame difficulties and challenges that they encountered at work, becoming a source of inspiration for other women in different fields.

The campaign will last for three months, during which Tahrir Lounge, an initiative of the Goethe Institut in Cairo, will organise many activities aimed at empowering women economically; raising their efficiency and skills in various fields through organising a series of workshops, seminars, and events; and screening short videos dealing with women’s issues.

It focuses on helping women to plan their careers, to learn how to confront sexual harassment in the workplace, and teaches them how to discuss the situation or condition of women at work.

Mona Shahin, the founder and manager of Tahrir Lounge, told Daily News Egypt that the campaign seeks to raise the awareness of the community on the value of women’s work and its impact on the economy at all levels and to support their participation in the labour market, as well as to promote a positive mental image of women’s role in society.

She added that the campaign seeks to create a state of community dialogue to support the participation of women at work.

Shahin called on women to join hands and support each other to gain their rights, support their participation in society, and renounce the perpetuation of anti-women attitudes coming from women, stressing on the importance of working on awareness campaigns to end this vicious cycle of violence. She added that the campaign’s slogan was inspired by these ideas.

She also called on all sectors of society, the media, government, and non-governmental organisations to create awareness and dialogue about the objectives of this campaign.

On the first day of the campaign, one of the successful women role models Tahrir Lounge hosted was the world champion weightlifter Fatma Omar, who decided to enter a field that many thought was impossible for women in general and handicapped women in particular.

Omar was able, with her determination and strength, to prove to the world that disabilities are when thoughts are impeded and that it is not about physical disability, through being the only player among weightlifters and handicapped weightlifters to win five Paralympic medals in the Summer Paralympics in 2000, 2004, 2008, and 2012. She was able to break a world record at the London Paralympics in 2012. She is able to lift weights of up to 150 kg.

On the sidelines of the panel discussion, Omar told Daily News Egypt that she started her journey in this sport 20 years ago, pointing out that when she began her career, there was not much attention given to handicapped athletes like the attention they are witnessing today.

She continued that at the beginning, her father was the only person who supported her in achieving her dream, explaining that the weightlifting field was limited to men at that time, so the rest of her family were refusing the concept that a girl weightlifts.

“My father’s trust in me that I can do something helped me win my first medal 15 days after my the training, so that I proved to him and my whole family that I really love this sport. After the death of my father, my brothers, sisters, trainers, and my mother were the ones who supported me to achieve my dream. Currently, my husband is the main supporter,” Omar said.

She also added that the thing that drove her to achieve her dream, breaking a new record in weightlifting, is society’s stereotypical look to her as a disabled person and that handicapped people always need help and cannot achieve any dream. She added that she has never viewed her disability as an “embarrassment,” pointing out that she sees it as the reason behind her fame.

As Egyptian Women’s Day approaches (on 16 March), and this year was declared the year of disabled people by the Egyptian president, Omar said that she hopes Egyptian women obtain their full rights to achieve their dreams, explaining that women in all fields fight for their rights, especially for equality.

She added that she hopes to see a female trainer in the weightlifting field, pointing out, “Egypt has some of the most capable women in the world, but the problem is we do not give them a chance to prove their abilities.”

In general, she thinks that women have a lot of similar challenges to men. Meanwhile, the additional challenge that women have is that they never waive their responsibility for housework, which adds an additional burden compared to men; balancing between work and domestic affairs.