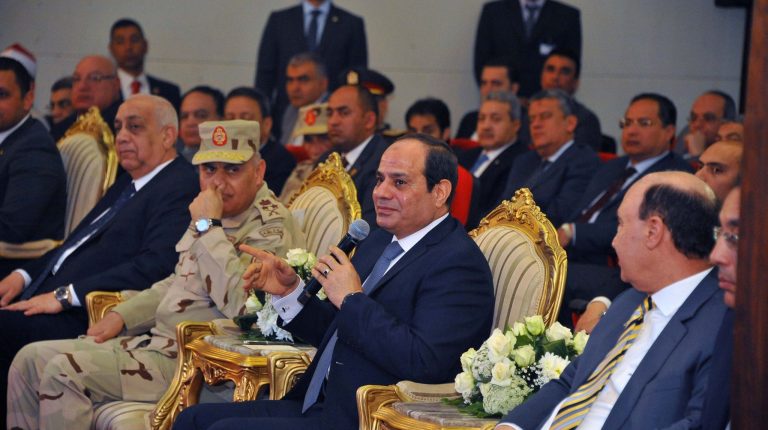 President Abdel Fattah Al-Sisi arrived on Saturday for an inspection tour in Port Said to follow up on a number of development projects.

This comes within the framework of the president’s regular visits to work and production sites across the nation to follow up on the execution developments of major projects underway.

During the event, Al-Sisi watched documentaries about the execution of development projects that included the marine port, industrial zone, and fish farms in Port Said. Al-Sisi further listened to a detailed explanation about the industrial zone at the area’s administrative building.

Head of the Suez Canal Economic Zone Authority Mohab Mamish said during the visit that the ports of the economic zone will be offered at competitive prices which will attract ships to pass through them.

Mamish also said, “we had to improve the capabilities of the maritime service by offering it on a competitive basis with reasonable prices, which will be attractive for investors because it is not acceptable that other ports be cheaper than ship passage here. This will happen in cooperation with the Ministry of Transport.”

“Eastern Port Said Port is the jewel of the ports of the Mediterranean, a great addition to Egypt’s maritime capabilities, and a decisive factor in pushing the national economy forward,” Mamish added.

Regarding Port Said Port, he further explained that it is “a large part of the global trade and navigation movement in the Suez Canal, and thus turns Egypt into an important centre for international maritime trade and logistic redistribution.”

Officials responsible for the implementation of projects requested extending the deadlines of completion, a delay which Al-Sisi approved, providing a period of three to four months’ delay due to the security measures in the region, stressing that it will not be extended for longer than this.