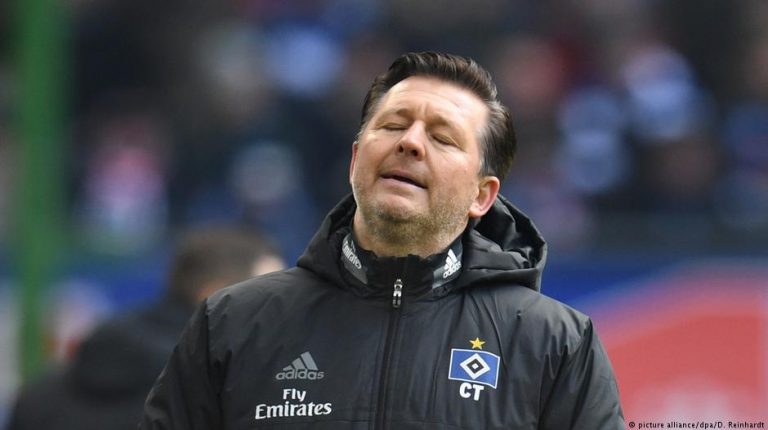 A young HSV team failed to capitalize on Mainz’s defeat to Frankurt as Hertha Berlin came from behind to win 2-1 at the Volksparkstadion. But there were positives in the first half for new coach Christian Titz.For the optimistic Hamburg fans who welcomed the team bus with chants of “Never second division, HSV!” there was a belief that Christian Titz could preserve HSV’s top-flight status. For others, it looks like an interim appointment until the Bundesliga dinosaur’s inevitable relegation. The 46-year-old former youth team coach believes it might be a mixture of both.

“The club has decided to try and install the philosophy, with which I took over the second team three years ago, in the first team,” Titz said at his unveiling.

A fully-qualified head coach since 2004, author of a series of coaching books and the owner of the internet portal “Coaching Zone,” Titz enjoyed non-league success with FC Homburg and with Hamburg’s U21s, who he has led to the top of the regional fourth tier this season.

The kids are alright

Transferring the style of his U21s to the first team professionals against Hertha, Titz named the youngest Hamburg starting XI (average age: 23 years and 359 days) since January 1974.

For 56 minutes, the Titz effect seemed to have worked. Pollersbeck had to make vital saves from Vladimir Darida and Vedad Ibisevic, but Hamburg were playing much better football. Two goals in seven minutes turned the game in Hertha’s favor though, and somewhat inevitably the uncertainty crept back into Hamburg’s game.

“We played well in the first half,” said debutant Steinmann. “But we have to admit that we didn’t push on and score more.”

Had they done so, Hamburg would have moved to within four points of Mainz – who currently occupy the relegation play-off spot and who crashed to a convinving 3-0 defeat away at Eintracht Frankfurt. As it is, the gap remains seven points with seven games to play.

Afterwards, Kyriakos Papadopoulos publically criticised Titz’s line-up – one the Greek defender was not included in. “It’s a shame that some experienced players who have managed to save Hamburg before weren’t in the team,” he said. “Sometimes, the best solution isn’t always to try something new.”

Clearly, Titz sees things differently and Saturday’s first-half performance suggests that he might not be the worst option for Hamburg’s long-term rebuild – whether it’s in the Bundesliga or not.