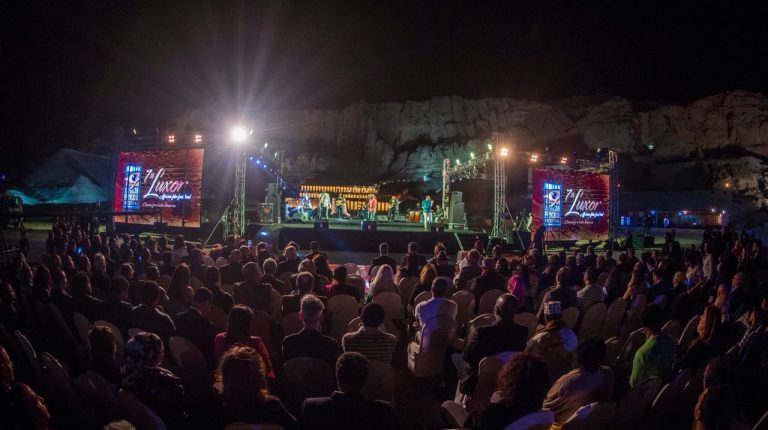 The Luxor African Film Festival kicked off on Friday at the Mortuary Temple of Hatshepsut on the western bank of the Nile, starting a marathon of films, exhibitions, and concerts by African artists.

The opening ceremony of the festival, which is 60% financed by the state, witnessed the attendance from several state officials, including Minister of Culture Inas Abdel Dayem, as well as representatives from the Ministry of Tourism and Ministry of Foreign Affairs. The ceremony also saw the attendance of many film actors, directors, and producers from the Egyptian film scene.

“Cinema remains the memory of the nation, which documents its history and its reality,” Abdel Dayem said, adding the festival is carrying on the objective of the state “to deepen and enhance the relationship with African countries, and the care for the cinema industry as one of the main pillars of forming the consciousness of the nation.”

The opening ceremony also featured the honouring of Egyptian director Youssef Chahine, whose film The Return of the Prodigal Son will be screened during the festival. Receiving the award is Chahine’s nephew, producer Gaby Khoury, who is one of the managers of Misr International Films, a company which was founded by Chahine.

Talking through a video message, Lebanese singer Magda Al-Roumi, who was one of the main female characters in the Return of the Prodigal Son, said that the film predicted several of the conflicts which took place in the Middle East.

The ceremony opened with a performance by Egyptian and Nubian-influenced R&B band Black Theama.

The seventh edition of Luxor African Film Festival comes carrying the name of the late prominent film critic Samir Farid, who died last year, leaving behind a rich bibliography of books, articles, and publications discussing cinema, culture, and art. A book discussing the impact of Farid on different generations of critics will be published by the festival and written by Amal Al-Gaml.

At a press conference on Saturday, rnowned film actor Gamil Ratib said, “I am proud to be honoured in a festival which represents and promotes African and Egyptian cinema. Egyptian cinema was one of the first in the world.”

“Egyptian cinema is extending to international festivals, not only films, but also through talents, like directors, scriptwriters, or videographers,” Ratib said.

Also speaking at the conference was Egyptian actor Samir Sabry, who demanded the managers of the festival establish a federation of African cinema, where films are marketed and sent to festivals around the world.

Part of the films programme is the Freedom and Human Rights competition which include films about freedom of speech and dissent. Poet Zeen Al-Deen Al-Abdeen said that the competition is one of the few results of the Independent Culture Coalition which resulted in many initiatives which came to light after the 25 January revolution.