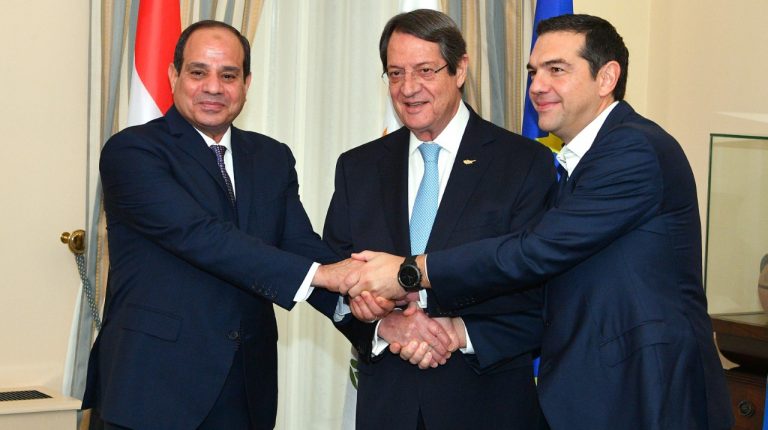 Al-Sisi and bin Zayed discussed several points on boosting the bilateral relations between the two countries. The meeting addressed, particularly, economic cooperation and investment opportunities. They also addressed the regional situation and dangers that threaten Arab national security, according to the statement.

Rady said that Al-Sisi and bin Zayed asserted the necessity of countering dangers that threaten Arab national security. They also agreed to stand united in combating all forms of interventions that target destabilising the security of Arab countries.

During the meeting, Al-Sisi praised the level of relations between Egypt and the UAE, which is considered an example for strategic cooperation between Arab countries, according to the statement. He also expressed Egypt’s keenness on developing the relations between the two “brotherly countries.” The president also stressed continuing discussions between the two countries on different regional issues and crises in several countries in the region. They discussed the best ways to end the region’s humanitarian crises and preserve the integrity of Arab countries.

Bin Zayed delivered his country’s President Sheikh Khalifa bin Zayed Al Nahyan’s greetings to Al-Sisi. He also expressed his country’s pride in its strategic relations with Egypt, and its keenness on continuing coordination and consultation with Egypt’s leadership. Bin Zayed also praised the latest political and economic developments in Egypt.

At a press conference following the meeting, Egypt’s Foreign Minister Sameh Shoukry said that Egypt, the UAE, and Saudi Arabia are working together in conjunction with international efforts for the sake of the Syrian people and unifying the Syrian resistance. Shoukry added they are communicating with international parties that have influence in Syria to reach a political settlement to the crisis and avoid a military solution.

Shoukry also explained that the meeting with bin Zayed discussed the Palestinian issue and the situation in Libya, as well as Iranian interventions.

For his part, bin Zayed said at the press conference that his country is offering all its capabilities to the Egyptian efforts to succeed in achieving Palestinian reconciliation.