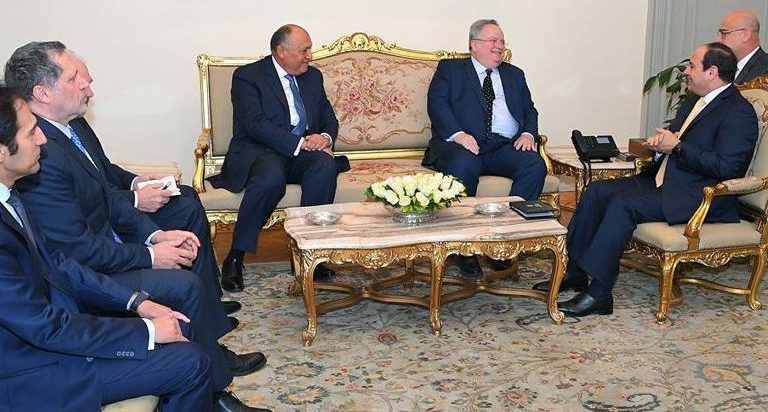 Officials discussed a number of issues related to common relations between the two countries and reviewed means of enhancing bilateral cooperation frameworks at various economic, investment, and trade levels, and pushing them to a broader scale. The meeting also discussed the latest developments in the region, ways to address terrorism, and efforts to resolve existing crises.

During the meeting, Al-Sisi expressed Egypt’s appreciation for the stances of the Greek leadership and people in supporting Egypt, especially in the wake of the 30 June 2013 uprising. He also stressed his keenness to strengthen Egyptian relations with Greece.

The president further praised bilateral relations which are currently developing in many fields, as well as the tripartite cooperation with Cyprus, especially in the field of energy in the Eastern Mediterranean, which contributes to supporting the interests of both countries and their peoples.

For his part, the Greek foreign minister stressed his country’s interest in developing its historical relations with Egypt in light of its status, its central importance, and pivotal role in the region, as well as its main role in combating terrorism and extremist ideology. He also expressed his appreciation for Egypt’s success and progress in maintaining security and stability, and a qualitative leap in all areas.

In February, Shoukry met Greek Defence Minister Panos Kammenos on the sidelines of the Munich Security Conference, during which both sides affirmed that they are looking forward to new developments in 2018, reflecting the strategic dimension of their relations, especially in military and security cooperation.

The two sides also lauded the tripartite cooperation between Egypt, Greece, and Cyprus, describing that mechanism as an excellent framework for bolstering areas of cooperation among the three countries.

Egypt, Greece, and Cyprus have held five summits. In the first, they agreed to a tripartite cooperation mechanism which succeeded in drawing maritime boundaries between the three countries. In the last summit, held in Nicosia on 21 November 2017, the three heads of state declared 2018 the year of friendship between them.

Security and defence are being given the highest priority in Egyptian-Greek relations. Tangible signs of the growing closeness are to be seen in the regular Medusa joint naval manoeuvres that have taken place in tandem with the five summits, joint military manufacturing projects, and the exchange of expertise.