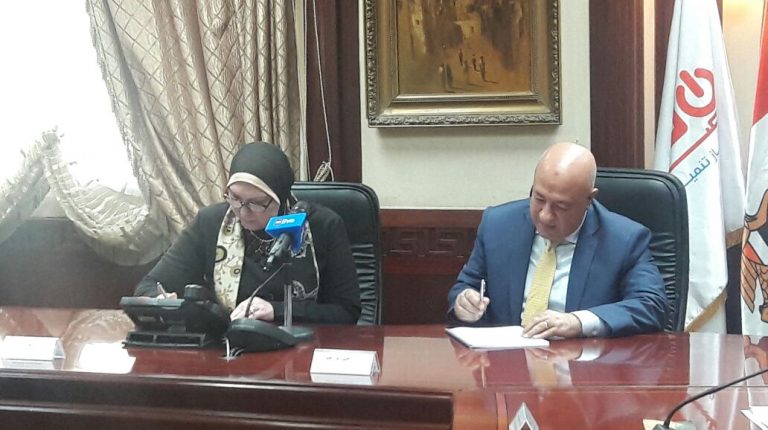 Nevine Gamea, Director General of the Small and Medium Enterprises Development Authority (SMEDA), and Yehia Aboul Fotouh, vice president of the National Bank of Egypt (NBE), signed a contract worth EGP 400m on Tuesday to finance new and existing small projects in all governorates.

The contract aims to cover the financial needs of some small projects operating in licensed activities in accordance with Egyptian law, including production, service, and commercial projects. The funds will be allocated at a maximum rate of EGP 5m for projects operating in the industrial, renewable energy, franchising, livestock, fish, and agricultural sectors, while other projects will be financed with a maximum of EGP 2m. All the funds will be granted at a slight annual return of 9% with maturities up to five years. The new deal will give priority to women’s projects.

According to Gamea, this contract comes in line with the state policy to support and expand in financing small projects, which contributes to creating more jobs and improving standards of living.

She also emphasised the importance of cooperation with the NBE, it being the largest financing bank small projects, and for its wide banking experience and massive network of branches nationwide.
According to Gamea, the SMEDA has been cooperating with the NBE since 1993, concluding 143 contracts worth about EGP 14.3bn so far, financing more than 332,000 projects. Those contracts included 176,000 direct loans from the NBE, while another 156,000 projects were financed indirectly through different associations that were granted banking facilities under the SMEDA’s contracts.

She pointed out that the authority offered about EGP 34bn since its establishment until the end of January 2018 in financing small and microenterprises, which contributed to implementing about 2.8m projects and provided 4.37m jobs.

For his part, Aboul Fotouh said the new contract comes within the framework of cooperation between the bank and the SMEDA on developing small enterprises, them being one of the most suitable economic development vehicles that suit the Egyptian economy, provide job opportunities as well as high quality goods and services locally.

Aboul Fotouh revealed that the bank’s direct and indirect loans portfolio for small and medium enterprises (SMEs) reached about EGP 40bn, benefiting 59,000 customers. He pointed out that the NBE aims to increase its SMEs loans portfolio to EGP 100bn by 2020, giving priority to the industrial and agricultural sectors.