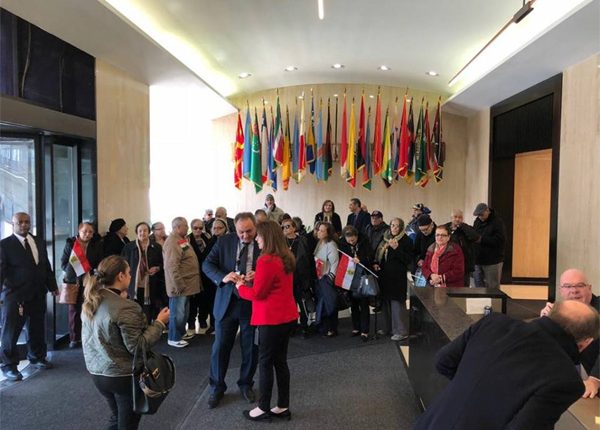 New York- A group of 97 police officers from New York will begin a tour in Egypt, including stops in Luxor, Aswan, and Hurghada, on 24 March, as an initiative to recognise Egypt and its sacrifices in the fight against terrorism in Sinai, revealed Hesham El Nakib, Egypt’s consul general in New York in a statement to a group of Egyptian journalists.

He explained that the visit will be the first of its kind. The officers themselves will pay the visit as a form of recognition of martyrs of the Egyptian military and police who sacrificed their blood and their lives in defence of their homeland and on behalf of the countries of the world.

He added that the representatives of the officers confirmed that those who sacrifice in Egypt protect citizens in New York, because terrorism is an intercontinental scourge, and therefore they saw that the least they could offer, in gratitude for the blood of martyrs, is visit Egypt. The group includes some officers with origins from the Middle East.

On the economic side, El Nakib said that a large number of US companies in New York and surrounding states have requested information on investment opportunities in Egypt. “There is a new phase that the relations between the two countries will begin in economic cooperation,” he stressed. “All that matters to investors is the infrastructure, legislative structure, and procedures to facilitate the business climate, which are all now available in Egypt.”

He highlighted demand from Americans to invest in the Suez Canal Economic Zone (SCZone) and the New Administrative Capital, as well as in the field of logistics services.

In this area, El Nakib said that New York is an important global hub for the export of wholesale agricultural products such as grains, as well as oil and cars, in addition to being the capital of financial, accounting, legal, and insurance services. “This opens broad prospects for trade and investment with Egypt,” he added.

El Nakib also stressed that American interest in tourism to Egypt is increasing day after day. “With some efforts and arrangements, the number of US tourists can double from 250,000 in 2017,” he explained.

He noted that he proposed to the new Egyptian tourism minister the importance of reopening a tourism representation office in New York as soon as possible. “She promised to study this and said that tourism is a matter of national security, even if it begins with one person who has the ability to coordinate between the tour operators in New York and the ministry in Egypt and local companies,” he added.

The Tourism Ministry closed the New York office in March 2017.

In terms of the election, El Nakib urged the National Electoral Commission to reconsider its decision to bar from voting those who have ID cards not stating they reside abroad, noting that this prevented many Egyptians from voting. In addition, he also demanded more polling places in areas where Egyptians are based in the United States, rather than just one in New York, to facilitate the electoral process and allow the largest number of Egyptians to cast their votes. “One polling place in New York makes it difficult for physical or practical reasons for tens of thousands to participate in the vote, especially since the distance between them and the station is sometimes more than 500 miles,” he said.

According to El Nakib, the number of registered voters is 55,000, while there are over 200,000 Egyptians in New York. He added that the demand to register is increasing.

At the end of his remarks, El Nakib said that consular services account for 25% of the mission in New York, while the remaining capacity is funnelled to economic, touristic, media, and cultural areas. He noted that the embassy is following the political and economic debates between the Democratic Party and the Republican Party to assess their impact on Egypt.

He added that the Egyptian community in New York is an active and strong community and has been able to achieve tangible success in the most competitive environment on the globe. He called on the community to register their data in the consulate’s database in order to achieve better interaction between them and their home country.

For his part, Nasser Saber, president of the Egyptian-American Association and a representative of Al-Sisi’s campaign in New York, said that the Egyptian community in New York and New Jersey provided the best example of the importance of voting in the presidential election, having turned the three voting days into a major celebration in the streets around the consulate.

Unilever to move headquarters from London to Rotterdam