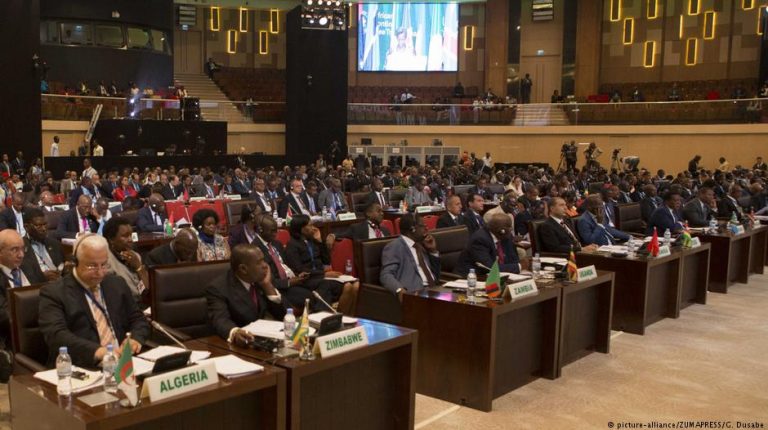 The deal would create the largest free trade zone in the world by participating countries. The African Union has said businesses currently pay more to export to other African countries compared to outside the continent.Fourty-four African countries on Wednesday signed up to create a free trade agreement within 18 months in an effort to boost meager intra-continental trade.

The agreement, known as the African Continental Free Trade Area (CFTA), was signed at an African Union (AU) summit in the Rwandan capital Kigali and will, if implemented, be the world’s largest free trade zone in terms of member countries.

“Our peoples, our business community and our youth in particular cannot wait any longer to see the lifting of the barriers that divide our continent, hinder its economic takeoff and perpetuate misery,” AU Commission Chairman Moussa Faki Mahamat said.

Leaders hope the deal, which still needs to be ratified at the national level, will help boost meager levels of continental trade.

Trade between AU members stands at a relatively low 15 percent of the bloc’s total commerce and has been cited as a factor for the continent’s enduring poverty.

Average tariffs across the continent stand at 6.1 percent, according to the AU. The bloc has said African businesses to pay a higher premium when they export to other African countries compared to when the export to outside of the continent.

Eleven countries, including Nigeria – the continent’s most populous country and its largest economy – did not sign the deal. Nigeria’s president skipped the summit, citing opposition from national trade unions.

AU Trade Commissioner Albert Muchanga nevertheless told Reuters news agency he thought Nigeria would come around to signing the agreement. “They are still doing national-level consultations and so when they finish they will be able to come on board,” he said.

If all 55 AU members eventually sign up, the deal will encompass 1.2 billion people and create a bloc with a cumulative GDP of $2.5 trillion (€2 trillion).

Negotiations over the agreement began in 2015. The AU sees it as one of the leading projects aimed at integrating the continent.

Multiple sub-regional free trade zones already exist, but they have only seen limited progress since their establishment.

Twenty-seven AU countries on Wednesday also agreed to a separate deal to allow for the free movement of people across the continent.