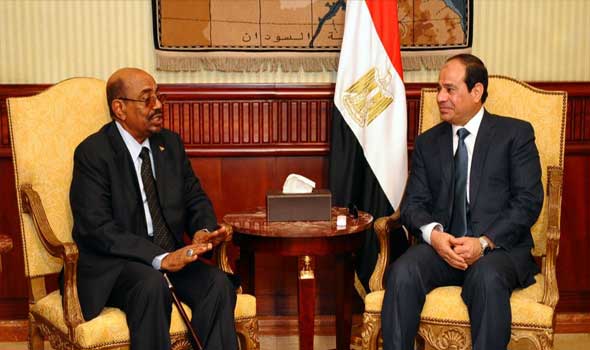 Over the past month, most op-eds focused on President Abdel Fattah Al-Sisi’s activities and support ahead of the upcoming election, which was in itself a subject of debate. While these topics will continue throughout the last week in the run-up to the election, opinion writers also discussed Egyptian-Sudanese relations in Wednesday’s newspapers.

Editor-in-chief of privately-owned Al-Shorouk newspaper Emad El-Din Hussein tackled Sudanese President Omar Al-Bashir’s recent visit to Egypt, praising reconciliation efforts amid tensions and saying both sides sent messages that tensions should not rise again. Nonetheless, he said a visit and a celebration are not enough to remove obstacles. Hussein wrote that there is an accumulation of 16 problems between the two countries, who he said have either had perfect relations or completely deteriorated ones throughout their history, adding that Al-Sisi has been keen on telling Egyptian media not to use escalatory rhetoric against Sudan.

Also commenting on the visit, Hassan Abu Taleb wrote in Al-Watan newspaper that diplomatic and security bodies successfully organised the event in order to overcome unprecedented tensions and mutual escalation by the media in both countries. He opined that Egypt-Sudan relations are affected by a wider regional perspective; on the one hand, Saudi Arabian influence and policies of continuing to stand against Qatar until it submits to their demands and desire to eliminate the Muslim Brotherhood. On the other, it has become clear, according to Abu Taleb, that Iran and Turkey only make alliances with Arab countries to serve their own motives, disregarding the wellbeing of those countries and their people.

In privately-owned Al-Masry Al-Youm, Abbas Al-Tarabily tackled another perspective related to the relations between the two countries, which are based on mutual benefits, including the freedom of their citizens to travel to and work in either country. Al-Tarabily wrote about trade and business opportunities between Egypt and Sudan, saying that Egypt imports meat from faraway countries, like Australia and New Zealand, whereas Sudanese meat is not only closer but also better appreciated by Egyptians. He further wondered why Egypt cannot agree to undertake agricultural projects in Sudan while the two countries share the outcome, especially since Egypt has become the world’s largest wheat importer.

In state-run media, “one people, one future” was a theme in describing Egypt’s relations with Sudan. Akhbar Al-Youm’s chief editor Khaled Miry said the relations between the two countries have become even stronger now following the latest tensions, as they share the same geography, history, main water source, and national security interests.

Al-Ahram’s Farouk Goweida wrote that the two have common challenges when it comes to terrorism and extremists escaping from Egypt to Sudan and vice versa, and that on the economic front, there should be a focus on full cooperation and integration between the two countries.

On a separate note, Amr Al-Shobaky drew comparison in Al-Masry Al-Youm between Russian and Egypt, which in his opinion share a similar political situation where the opposition is marginalised and given scarce space. However, Al-Shobaky argued that analysts appearing in the media were able to smartly explain Vladimir Putin’s winning of the election, although they stated that defending the dignity of the Russian people before the West would not be enough to maintain his popularity over the next six years. The writer said that the Egyptian media is unable to provide such logical arguments in explaining why a president would sweep votes in such fashion.