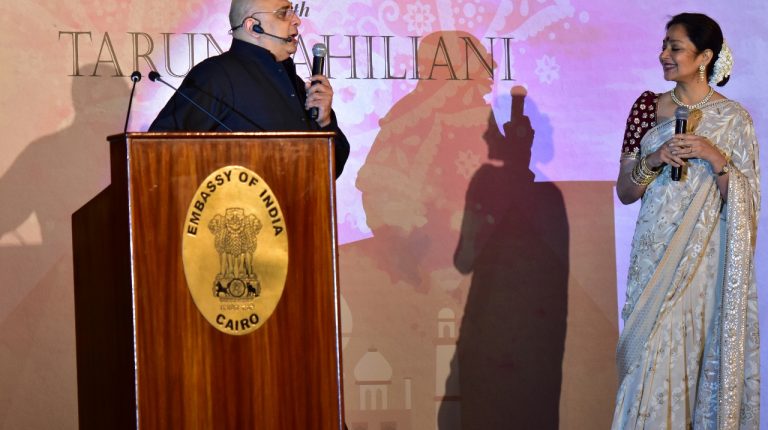 For centuries, the history of India has been embroidered on sarees, one golden thread at a time. The country’s vast population has documented revolutions, stories of love, and ventures of literary expeditions on brocade and draped silk.

Being at the heart of the old world, the country has changed through history to keep up with the shifting times; nonetheless, the intricate and extravagant outfits of locals have never obeyed the world’s constant change of mind when it comes to trends.

Fashion designer Tarun Tahiliani found his way to the fashion industry just in time, when his country was starting to embrace the newly-discovered form of art. Influenced by the elaborate European fashion on one hand and his life among the charismatic sarees on the other, Tahiliani soon found himself a creator of wearable ambassadors.

The fashion designer packed a number of his modern representatives of a whimsical heritage earlier this week in order to bring Delhi to the Nile. Tahiliani participated in the annual festival organised by the Indian Embassy in Cairo to support cultural exchange and break Hollywood-fuelled stereotypes.

Nonetheless, his active role as an advocate of textiles and embroidery started years ago through a mere coincidence. As instant as love at first sight, Tahiliani’s journey began with the unswerving lines of fine tailoring and immutable jingle of statement accessories.

“Years ago, when we had a closed economy, Pierre Cardin came to India. Unexpectedly, my wife was asked to model because they only had five French models with them.” The designer added, with a reminiscent smile, “by mere chance, I went to my very first fashion show to support my wife. It was absolutely beautiful. We were not exposed to that kind of art; precise tailoring, styling, and accessories.”

According to Tahiliani, the concept of fashion was non-existent at the time. The majority of people went to tailors. Known for their incomparable textiles, the locals simply wrapped their favourite fabrics in order to make their own personal fashion statements.

Infatuated by his first show, the designer started focusing on the local fashion scene. At the young age of 24, he came to the realisation that India’s best fashion was in fact sold abroad. Accordingly, Tahiliani took his first steps in the novel industry, when he established the country’s first multi-designer store: Ensemble.

“I could feel the market change coming even that early. No one wanted to wear the saree; they wanted to wear new things. Accordingly, I aimed to give people what they truly needed,” the designer said. “Our best work had to become available for our people; we needed to let our culture flourish. Ensemble aimed to celebrate India by Indians.”

For years after, Tahiliani has been crowned as an advocate of embroidery as well as a master of tackling the old world’s need to become contemporary. Circling around the globe, the designer has brought an air of ease and practicality to his culture-infused designs. His runways in Milan and other major cities have introduced an international audience to what used to be a traditional costume.

“I can go to work and just dedicate my time to beautiful embroidery; but, where is my relevance to the women of today? Everyone will switch to western clothes; it has already happened. In this case, traditional clothes become costumes that we only wear to weddings. It is just like the Japanese kimono; it is no longer a regular garment that younger generations opt for. At least in India, we still do not wear western designs to weddings,” explained Tahiliani in distraught.

As someone who allocates a good portion of his daily routine to studying history and art, Tahiliani is quite aware of the increasing need for practicality. According to his personal studies, while European fashion has evolved with time, reflecting the ongoing changes of eras, Indian garments have remained untouched for as long as the nation can remember.

“We have been very faithful to the beautiful fabrics and amazing jewellery for the longest period. Basically, we had to suddenly let go of our grandma’s traditional style to embrace modernity in order to survive the new millennium. Fashion needs to change; it is about the needs of the people,” said Tahiliani excitedly.

The designer identifies the need to give Indians what they need as his quest. Accordingly, it was no surprise when he decided to stop showcasing his work in Milan in order to concentrate his efforts on addressing his own people.

“When we first went to Milan, we took elements from classic Indian art and turned them into contemporary prints; meanwhile, we borrowed the statement jewellery, brocade, and tribal accessories from the heart of the country. More importantly, we added a contemporary twist on the traditional kaftans and sarees,” Tahiliani said. “We were also inspired by traditional men’s clothing. We took a few elements and incorporated them in modern cotton outfits for women.”

As the designer likes to repeat passionately, India is a goldmine for ideas. Nonetheless, he is often concerned that, due to stillness, the cultural wealth will soon disappear when millennials decide to only wear dirty jeans paired with worn-out t-shirts.

“Our brand is to keep India alive, yet, in a contemporary method. We aim to maintain our heritage while also taking into consideration our global identity. For next spring, we are working on a number of modern sarees that remain true to the brocade and rich draping; yet, anyone can still wear them around the world. I believe that the saree as well as the traditional jewellery have to become a global trend,” said Tahiliani lovingly.

Aside from fashion, Tahiliani is also quite known for experimenting with different forms of design. He has artistically turned traditional motifs into a line of carpets, which embraced his favourite colour beige.

According to him, cultures are built on layers of different decades and influences; nothing is ever shiny in the old world. Accordingly, he is often keen to add the aesthetic of mud to his interior designs. “I come from a culture quite similar to Egypt. Nonetheless, I do not want to put emphases on the expected multi-colours. Instead, interiors should be toned down to suit my modern context,” said Tahiliani while browsing through images of his own house.

His current visit to Egypt comes as part of the embassy’s annual festival, India By The Nile. Due to his expertise in this particular role, the designer was invited to help the guests grasp the core of Indian fashion, far from expected stereotypes. Nonetheless, as a devoted researcher, who has an adoration for ancient cultures, Tahiliani has also taken this week in the land of pharaohs as a chance to truly meet the country.

“We have all grown up inspired by Egyptian history. We have all sketched Egyptian-inspired art. It is a visual culture with distinctive eye makeup, gold jewellery, draping, and muslin. Just as everyone still thinks India is the maharaja and his tiger, even though they are both gone, to a foreigner, Egypt is Elizabeth Taylor playing Cleopatra. I had to come to Egypt to truly know it,” said the designer enthusiastically.

After only one day around the capital, the designer, who was still excited to explore the rest of country, was already adamant that draping is his favourite element of traditional Egyptian fashion.

Aside from the festival’s activities, he was also keen on visiting Luxor, as well as spending a week sailing down the Nile in preparation for an upcoming collection inspired by the country. “I have asked for a traditional boat and every afternoon, I will just dedicate my time to sketching,” said Tahiliani.

Usfuur: birds of a ‘cause’ flock together