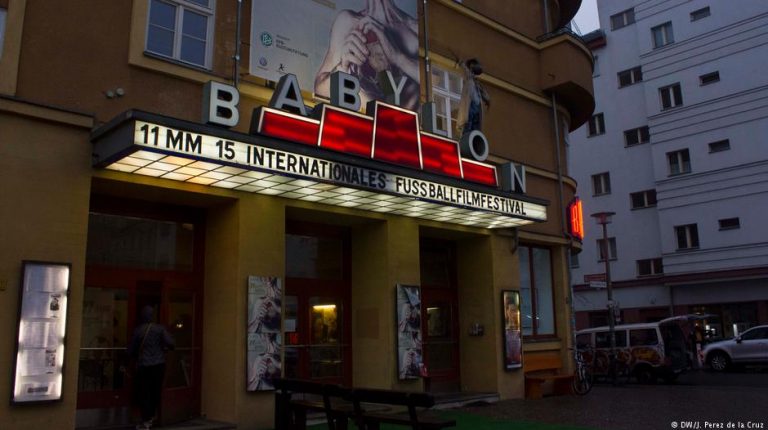 The opening night of the festival’s 15th edition featured the screening of “The Workers Cup.” The film is a documentary about the lives of the migrants building the facilities for the 2022 World Cup in Qatar.Football is an extremely powerful tool that can be used to build bridges between cultures, but it can also be used as part of a propaganda machine in the hands of dodgy governments. The focus of this edition of the 11mm Football Film Festival in Berlin is “football and power.”

The Workers Cup, a documentary directed by the American filmmaker Adam Sobel, was chosen for the opening ceremony. The audience packed into the Babylon cinema watched the story of migrants working in appalling conditions to build the stadiums for the 2020 World Cup in Qatar.

With intimate access and a sensitive approach, the film depicts the contrast between the shiny, luxurious world of the Qatari elite longing for the World Cup and the harsh reality of those men.

“We also showed it to the wives and families of the people in the film. I know for some of them it was quite shocking and sad, but they are still happy the story has been told and they hope it will create change,” Rosie Garthwaite, one of the film’s producers, told DW.

Garthwaite and other members of the crew were experienced the state of human rights in Qatar first hand as they spent time in jail while trying to do their job. She said that the country had been coming under a lot of international pressure in recent years, and that the International Labour Organization, a United Nations agency, was now active in Qatar through a technical cooperation program.

“However, we have seen before a lot of promises and no change, so now we just have to wait and see if these promises are put into action,” Garthwaite added.

The world’s biggest football film festival is to screen more than 60 films over five days. Among the documentaries on show are stories originating from or dealing with Argentina, Brazil, the former East Germany, Iran, Qatar, North Korea and Russia.

“I think you can separate football and politics at the amateur level, but it is impossible to do so when it comes to the professional game,” Birger Schmidt, one of the directors of the festival, said. “Football is a very honest art of capitalism, so there’s always politics in it.”

“Football is also about diplomacy. For some countries, it is very important to be good at football because of the difficulties their citizens endure in their daily lives.”

As the most popular sport in countless countries, football isn’t just a reflection of people’s wishes and dreams but also their fears and animosities. In Turkey, for example, the ongoing tension between Turks and Kurds is depicted in Yesil Kirmizi (Green Red), a documentary by Ersin Kana focused on Amedspor, the local club of Turkey’s main Kurdish city, Diyarbakir.

“Football plays a huge role in the politics of Turkey,” said Recep Bozgöz, author of Ronaldo, a Turkish short film that is also to be shown. He cites the example of the 2013 Gezi Park protests, where the fans of Istanbul’s three biggest clubs, Besiktas, Galatasaray and Fenerbahce, came together for the first time to express their opposition to the politics of Recep Tayyip Erdogan, who at the time was Turkey’s prime minister.

Offside, a 2006 documentary by Jafar Pahani in which a woman dresses up like a man in order to watch an international match, highlights the dreadful state of women’s rights in Iran.

Given the fact that the World Cup in Russia is just weeks away, the 11mm Festival has a strong Russian presence. As part of the festival, the series “Football in Russian Films” – a set of films from historic and romantic comedies to social dramas – is to be screened at the Russian House for Culture and Science in Berlin.

Concerns have been raised about how safe it is to attend football matches in Vladimir Putin’s Russia, where allegations of racism, homophobia and corruption are not uncommon. These concerns grew in light of incidents of violence involving Russian hooligans in Marseille during Euro 2016. The short film Should you be afraid of the Russian World Cup? focuses on the issue. Another film dealing with hooliganism in Russia is Okolafutbola, a controversial documentary that was excluded from the Saint Petersburg International Film Festival.

Football can be a powerful tool when it comes to winning the hearts and minds of a population – as autocratic leaders well know.

One of the most dramatic examples of this was the 1978 World Cup in Argentina, when the military junta that had taken over the country two years previously south to use the tournament as a PR stunt to legitimize its brutal regime.

Similarly, the German documentary WM-Sieg unter Folter (World Cup victory under torture) documents the memories of victims of the dictatorship from that World Cup, which Argentina won.

This year’s 11mm Football Film Festival brings together films from all around the world. “We never thought we could get to the 15th edition when we started back in 2004,” Schmidt. “Football and films are still very interesting and now we have partners on every continent with festivals from Sydney to Oklahoma to Rio de Janeiro.”