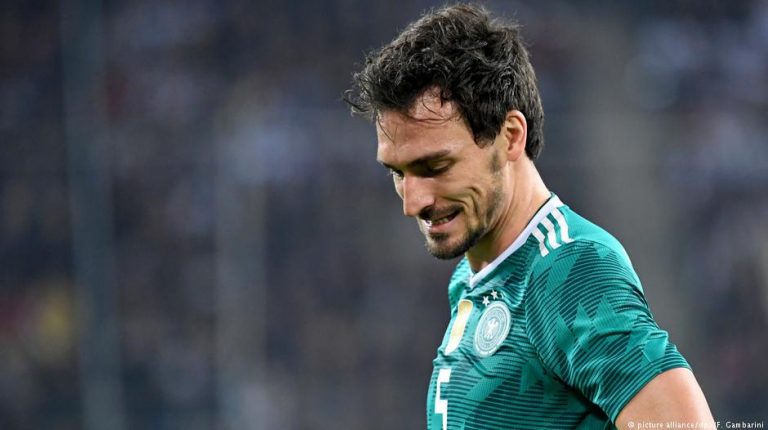 After a difficult opening phase, Joachim Löw’s back four eventually radiated its usual air of experience and quality. If Germany are to defend their World Cup title, they’ll need get out of the blocks quicker than this.Looking back, Germany can be satisfied with their collective effort. A 1-1 draw against Spain is, after all, not a bad result, and there are positives to be taken from the game as well as an admission that Joachim Löw’s side started slowly. Germany fans, out in full force at the Düsseldorf Arena, reached the same conclusion, warmly applauding the team off the pitch at the final whistle.

Germany’s struggles in the opening minutes were laregly self-inflicted. Mats Hummels, a player widely lauded for his poise and ability to play out from the back, was forced into a number of errors.

“We wanted to get after them from the opening whistle but Spain played straight through us,” he admitted after the match. “It was a challenging game, and we had big problems at the start.”

The Bayern Munich defender wasn’t the only guilty party, but a player of his experience was caught flat-footed too often in the opening exchanges. He lost his man on the sixth minute, allowing Rodrigo Moreno the space to put the visitors ahead. His passing, usually the source of Germany’s flowing football, also lacked accuracy as he repeatedly put the ball out of play.

Hummels was painfully aware of his inability to establish himself in those opening minutes, and could be seen faliling his arms and scolding himself ater every error.

His fellow defenders had their own problems. Jonas Hector was caught in no man’s land early on as Andres Iniesta found the excellent Isco on the touchline. The Real Madrid forward was given a free run at Germany’s defense but, fortunately for the Cologne defender, the move fizzled out to nothing. On the other side, Joshua Kimmich found himself repeatedly overrun by Jordi Alba and whichever of David Silva, Iniesta and Isco happened to join in the fun. They were dragged from pillar to post in those early stages.

There was an almost palpable anxiety in the air as Kimmich landed Jerome Boateng in hot water with an overhit pass. Germany’s defenders could count themselves lucky as Spain’s forward line repeatedly failed to make them pay. As JLöw’s own attack grew into the game, so the pressure on his back line began to wane.

This opening struggle lasted for around 25 minutes, after which Germany began to assert themselves. There were, of course, further scares but Germany’s defense were no longer causing its own problems. Teams with he exceptional ability of Spain will create chances. So too, will Germany.

The fact that Hummels almost scored midway through the second half, rising highest to head a Toni Kroos free kick against the bar, exemplified his turn around after that difficult opening phase. The quality and assured passing were back, and Germany were in the ascent.

It was plain to see, however, that this was Germany’s first game of 2018. When the team lines up to face Mexico on June 7th, in the first of Germany’s World Cup group stage fixtures, such a long bedding-in period will not be tolerated by Löw.

“We’re at a good level, but we can get even better,” offered Kroos after the game. His words will be music to the ears of Germany fans, who know it will take a lot more than this performance to lift the trophy in Russia.

Hummels was reflective following a long night’s work in Düsseldorf. “We never tire of emphasizing the quality of the world’s best teams and Spain belong to that group.” Competition is certainly fierce. Defending the World Cup will be a tough job.