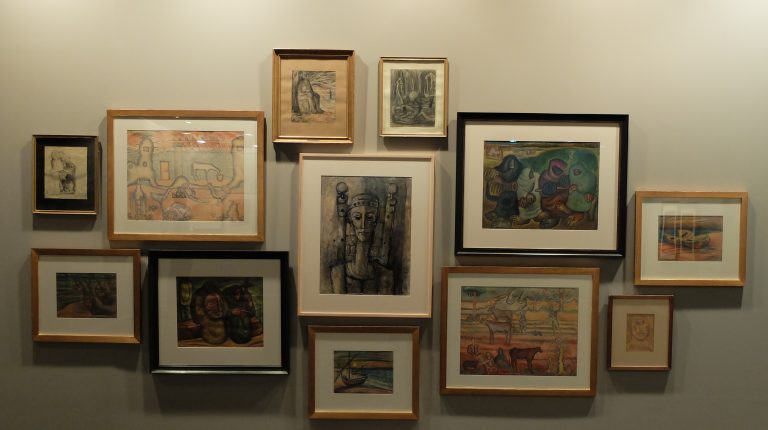 From the calligraphy-rich Sufi-inspired works of Algerian Rachid Koraïchi to the sombre work of Palestinian Samah Shihadi, the 2018 edition of Art Dubai offered art buyers and aficionados a wide range of artistic expression from the Middle East and around the globe. The 2018 edition ran from 21-24 March.

The work of Doaa’ Aly, one of Egypt’s most exciting young artists, returned to Art Dubai in style. Last year, her work was featured at Art Dubai as part of a special exhibition of the prestigious Abraaj Group Art Prize, for which she was shortlisted.

This year, thanks to Cairo’s Gypsum Gallery, fans of Aly could find her work in a different but no less prominent spot. One of her installations played on a loop near the door to the Art Dubai exhibition, which is held each year on the grounds of the Madinat Jumeirah Resort.

“This year we showed one of her films that is a precursor to the work that was shortlisted for the Abraaj prize, but its similarity choreographed its focus on the complexity of social issues,” said Gypsum Gallery Founder Aleya Hamza.

In addition to the video installation, the gallery also displayed some of the artist’s careful pencil tessellations inspired by human anatomy.

“Her work draws on anatomical sketches from medical textbooks,” said Hamza. “The series is an expression of her work as a fine artist. Her video works involve careful choreography as a reference point. The creation of each sketch is a very labour-intensive process that can take twenty-four hours.”

Gypsum Gallery also featured the work of three other female artists from the Middle East at their booth. Last year, the gallery held the same key place in the fair and featured the works of Ahmed Morsi, one of Egypt’s most important modern painters. Showing the growing interest in modern art from the Middle East, Africa, and South Asia, Art Dubai also featured a large number of Egyptian modernist painters.

The modern art section of the 2018 fair included 16 galleries from 14 countries. This year, for the first time, galleries in this section were allowed to feature the work of modern artists.

The modern art selection this year was bolstered by a new partnership between Art Dubai and the Misk Art Institute, a Saudi cultural organisation founded by Saudi Arabian Crown Prince Mohammed bin Salman’s MiSK Foundation. In partnership with the Misk Art Institute, Dubai was able to substantially expand the modernist section of the fair. A renewed investment in cultural expression is a key part of the reforms undertaken by the crown prince as part of Saudi Arabia’s Vision 2030.

By pooling the resources of the Misk Art Institute and Art Dubai, the two entities created a museum-quality, non-selling exhibition which featured five modernist schools from across the Middle East—from the Casablanca school to the Khartoum school, with much of the work from these schools now in the private collection the fair offers.

The exhibit featured works from mid-20th century art movements from across the Middle East and an entire room in this exhibit was dedicated to the Contemporary Art Group of Cairo, an important grouping of Egyptian modernist artists which began in the 1940s.

To further commemorate the group, Cairo’s Karim Francis Gallery displayed works that were not only prominent, but archival material that represented an important part of art history in Egypt and the development of modernist art in the country.

The other Egyptian gallery displaying modern art was Cairo’s Ubuntu Art Gallery. Ubuntu, which opened in 2014, featured the work of Samir Rafi. While Rafi is known for his surrealist take on daily Egyptian life, his work on display in the gallery featured wolves devouring fish and birds, as well as sombre-looking figures often seen from behind bars.

“I think these figures are references to some medical issues he faced, his own personal fears, and the treatment he received from colonial authorities in what was then French Algeria,” said Ahmed El Dabaa, founder of Ubuntu gallery.

“Samir Rafi started to become famous in the 1940s when he was still in his 20s. Of course, Rafi studied in Paris, but his career also included sojourns in his native Cairo and revolutionary Algeria,” El Dabaa said. Rafi eventually returned to Paris where he died in 2004.

“This is our first time in Dubai, and we decided to focus on Samir Rafi, and this fair provided an opportunity to offer a proper introduction to his work through a gallery from Egypt,” El Dabaa said. Egyptian surrealist and modernist painters like Rafi have received global attention in recent years with major shows hosted across the world from the Centre Georges Pompidou in Paris to the Sharjah Art Foundation in the UAE.

No Egyptian artist may have been shortlisted for the Abraaj prize this year, but another rare honour went to an artist with Egyptian ties. Egyptian-Swiss Karim Noureldin, who previously received a commission from the Swiss banking group Julius Baer Group, displayed his work to the general public for the first time at the fair.  The artist lives in Switzerland with his family but has previously spent periods working and researching Egypt. “This is my first trip to Dubai but I feel very at home in the region,” he told Daily News Egypt.