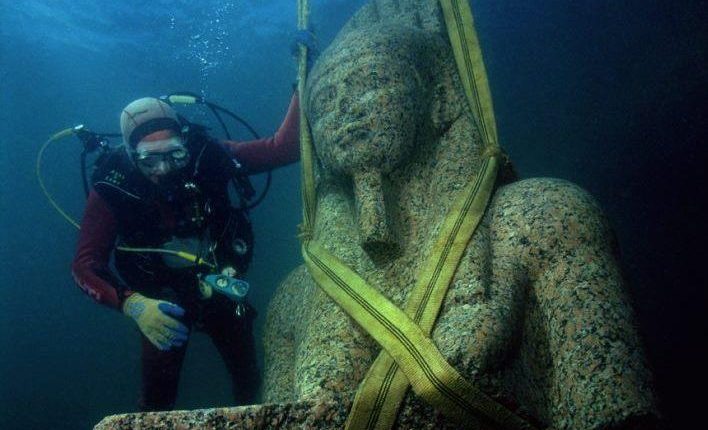 Egyptian Minister of Antiquities Khaled El-Anany inaugurated on Friday “Sunken Cities: Egypt’s Lost Worlds”, an exhibition of artefacts discovered under water that were lost for 1,000 years before they were accidentally found. The exhibition is being held at Saint Louis Art Museum in the United States and will last until September.

The exhibition showcases 293 artefacts that tell the tales of the two cities Thonis-Heracleion and Canopus, which were located on the Nile Delta. The islands were not found. Yet, the discovered monuments tell stories from their history and people’s living conditions in them.

The opening was attended by several figures from the Egypt’s Ministry of Antiquities and the Egyptian consul in Texas, where the museum is located.

El-Anany described the exhibition as a message of peace from Egypt to the US, saying that it is an open invitation to Americans to visit Egypt, “the country of peace,” asserting that antiquities are Egypt’s soft power in promoting tourism and they are the main thing that represent Egypt’s diversified culture and acceptance of other beliefs.

El-Anany added that 2018 will witness several museum openings, the Grand Egyptian Museum and Sohag Museum among them.

For his part, Mostafa Waziri, secretary general of the Supreme Council of Antiquities, expressed his expectation that the exhibition will attract thousands of visitors, stating that 1,000 tickets were sold only in the first day of promoting the exhibition’s opening. He also added that almost all of the tickets for the exhibition’s first day were sold once they were released for sale.

Among the showcased artefacts are huge statues of the ancient Egyptian goddess Isis and the sphinx, as well as some ancient jewellery and home items.

“It appears miraculous that ancient Egyptian archaeological treasures that were lost under the sea for some 13 centuries survived and were rescued in such remarkable condition in this young century,” The St Louis American newspaper wrote in a report on the exhibition on Thursday.

The exhibition is the fourth Egyptian artefacts exhibition hosted in a foreign country. The first exhibition kicked off in Toronoto, Canda this month, showcasing the heritage and monuments of the Egyptian Fatimid era, and another one will also open its doors to people in California this month, displaying belongings of Tutankhamun, while a third exhibition will soon be inaugurated about jewellery from ancient Egyptian eras.