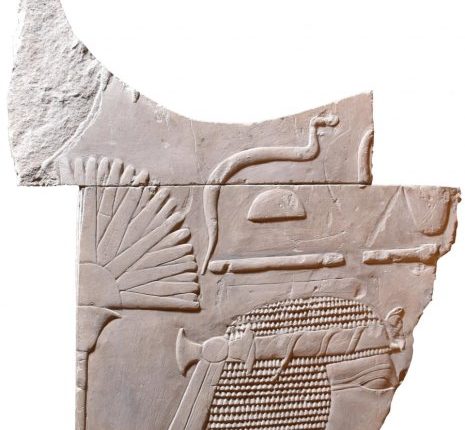 An ancient Egyptian depiction with carvings featuring female Pharaoh Hatshepsut was discovered by Kenneth Griffin, an Egyptology lecturer at Swansea University in the United Kingdom, the university said in a statement.

The discovery came as the limestone was selected from the university’s Egypt Centre stored collection to be used in an object handling session.

The depiction consists of two glued limestones. The front side shows a figure with a missing head standing while a fan stands behind her looking towards her figure. Traces of hieroglyphs are found above the head of the pharaoh.

The iconography of the piece indicates that it represents a ruler of Egypt, particularly with the presence of the uraeus (sacred serpent) on the forehead of the figure, the statement reads.

The limestones were kept in the centre’s storage for over 20 years, only to be requested for handling sessions.

“The identification of the object as depicting Hatshepsut caused great excitement amongst students. After all, it was only through conducting the handling sessions that this discovery came to light,” Griffin said.

Griffin recognised the limestone, as it was clearly close to the same patterns he had previously seen on his trip to the Mortuary Temple of Hatshepsut in Luxor.