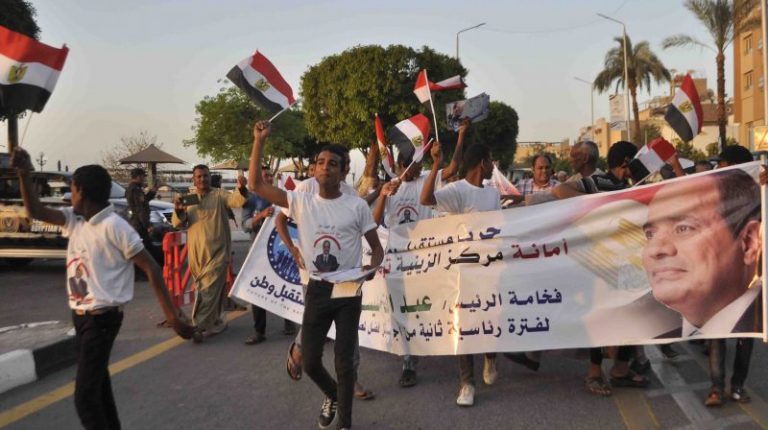 Electoral campaigns for the 2018 presidential election ended earlier this week, beginning 48 hours of pre-election silence for citizens to decide before voting kicks off. Voting in the presidential election will last for three days from 9:00 am to 9:00 pm. If no candidate secures 50% of the vote, a run-off will be held in April, though no one expects this.

Al-Sisi announced his candidacy during a three-day conference, titled Story of a Nation, which took place in February, calling on all citizens to participate intensively in the upcoming election and vote for their preferred candidate.

Throughout the past year, whenever asked about the possibility of seeking a second term, the president had always stressed that he will never go against the Egyptian people’s will, and would only run if people called on him to do so.

Al-Sisi enjoys widespread popularity among citizens for returning the country to stability, after it had faced security threats after the ouster of Islamist former president Mohamed Morsi’s regime. However, there is a recognised dissatisfaction among people regarding his economic strategy that has impacted the livelihood of al of Egypt’s social classes.

When Al-Sisi announced his decision to run in the election, there were no potential rivals on the scene. Citizens began discussing the possibility of an election being helf with one candidate, questioning the absence of other nominees and expecting a scenario where the election would essentially be a referendum.

Moussa’s candidacy “saved” the Egyptian political scene, which would have been negatively impacted if it were a one-man election. He applied for the election only 15 minutes before the deadline for potential candidates, amid an absence of any competitors and political figures’ rejections to be nominated for the election.

The absence of candidates resulted in fears of negatively impacting people’s motivation to vote, leading the state to create campaigns to encourage voter turnout.

Throughout the months of campaigning, the government along with citizens organised rallies to encourage people to express their aspirations through the election and to choose their desired candidate. Most of them were held to support Al-Sisi.

Mohamed Manzour, founder of “With You for Egypt” campaign, told Daily News Egypt, “we organised around 390 rallies across Egypt’s governorates. Each one was attended by over 3,000 citizens.”

“Our campaign, which started in November was initially calling on people to participate in the election and raising awareness on the importance of voting. After Al-Sisi’s decision, we started to support him, narrating his achievements throughout the past four years,” Manzour said.

When asked if they were circulating an electoral programme, he said “no,” as they are not the official campaign, they were only supporting Al-Sisi.

Regarding the funding of his campaign, Manzour said that its activities were financially supported by citizens, parliamentarians, and businesspersons.

“Businessperson Mohamed Aboul Enein, and members of the Federation of Egyptian Industry attended our last event. We never asked for money, people were joining us by their own desires,” he said.

Moreover, private media channels created video and audio clips promoting the importance of participating in elections, and reviewing Al-Sisi’s achievements. Popular Egyptian singers, including Hisham Abbas and Hakim, created songs, either to support Al-Sisi or to call for people’s participation in elections.

Emirati singer Hussain Al Jassmi, for the second time, created a song to promote participating in an Egyptian election. In 2014, his song ‘Bushret Khair’ (Good Omen) called on citizens across the nation to vote. This year’s song tells the stories of citizens of different social classes, whose lives are depicted as becoming more prosperous after benefiting from projects and services offered by Al-Sisi’s government.

The actors wore t-shirts bearing slogans like “Tahya Masr” (Long Live Egypt), the phrase Al-Sisi regularly says three times at the end of his public speeches. Every shot in the song’s video ended with a military salute.

During the past 28 days, campaign billboards and banners were spread across the nation for the candidates, though the majority were for Al-Sisi, reportedly put up by supporters and not his electoral campaign, which suggests an atmosphere largely in favour of Al-Sisi winning.

In all areas of the country, posters of Al-Sisi can be seen more than names of shops or any other advertisements in the streets.

Parliamentarians, businesspersons, public figures, and families published photos of Al-Sisi, wishing him success and signing their names on them.

On the other hand, Moussa’s posters were a rarity in streets. In one district, you may only find two posters, while in others there are none at all. Even outside his party’s headquarters, there is but one poster. In Zamalek, though, you can find at least four posters of him, some large, and all placed by the candidate’s campaign.

Similar sights can be witnessed across other governorates, as there is clearly higher public support for Al-Sisi. In Beni Suef, you cannot walk on any street without seeing a large, well-financed poster of the president.

The majority of street banners were funded and placed by citizens. According to article 22 of the Presidential Elections Law, each candidate’s electoral advertising should not exceed EGP 20m.

Moussa has previously said that his campaign did not even reach half of the legal spending limit, reaching less than EGP 9m. He also commented on the absence of street banners for him in comparison to Al-Sisi, saying that this large number is not only by the incumbent’s campaign, but citizens expressing their support.

Two marches were organised by Moussa’s party in support of him, though were attended by very few people, mostly journalists covering them. Similar marches were also held for Al-Sisi, which sawmuch higher turnouts.

In the month-long campaigning season, Moussa was the candidate who appeared gave more interviews in the media. Meanwhile, Al-Sisi’s appearance in the media was limited. He had only one interview with cinema director Sandra Nashaat, who discussed with him his four years in office and some questions about his personal life.