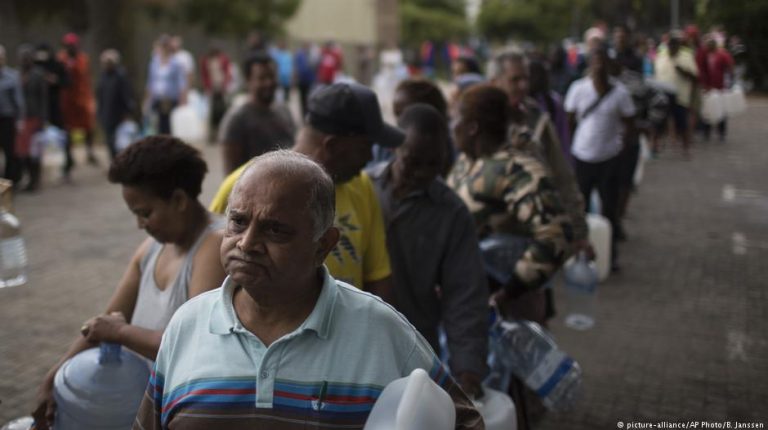 Cape Town might have dodged Day Zero, but a new hyper-consciousness of water use looks set to be the new normal — and not just for the drought-hit African city.The water crisis is clear before you’re even out of Cape Town International Airport. The bathroom faucets are dry, with soap replaced by hand sanitizer.

After a historic three-year drought, Cape Town faced the prospect of “Day Zero” — the moment when the water supply runs too low to supply homes, and all the city’s faucets go the way of those at the airport.

To avert the collapse of municipal plumbing, the city imposed a limit of 50 liters (13 gallons) of water per person per day, with sharp financial penalties for overuse.

Day Zero was initially expected in April, but pushed back to June, July, and then August. Earlier this month, the city announced that water-saving limits had worked.

But that doesn’t mean the crisis has passed. In fact, it might just be the new normal.

From hand-sanitizer in place of soap to 2-minute showers, the thousands of measures — big and small, public and private — adopted to cut Cape Town’s water consumption will be needed for some time yet.

How to hydrate a city

This week, Cape Town’s water daily consumption averaged at 565 million liters — about half the daily amount it consumed three years ago. It aims to cut daily use to 450 million liters. Meanwhile, the water level in the dams that supply the vast majority of the city continues to fall.

Which is why the hunt is on for alternative sources. Experts say the move that would fundamentally change Cape Town’s water math is drilling into aquifers beneath the city.

John Holmes is managing director of Umvoto Africa, an earth-sciences consulting firm named for the Xhosa word for water. He says Cape Town’s challenge is that surface water provides 98 percent of its supply. In a drought, that resource plummets. But underneath the city are vast stores of water that could help maintain a steady supply.

Holmes estimates that three aquifers — Cape Flats, Atlantis, and Table Mountain — could provide up to 150 million liters, or a fifth of Cape Town’s drinking water. The city was planning to develop the aquifers before the drought hit — now the project has assumed a new urgency.

“The initial timeline would have been — you would have done that over several years, maybe five or six years,” Holmes said. “Now we’re looking at doing that in a period of one to two years.”

But development does take time. The largest aquifer, under Table Mountain, lies about a kilometer underground. And water from all three aquifers will need to be treated and piped into the municipal plumbing.

“The engineers working on the project have to build new infrastructure as we develop the wellfields,” Holmes said.

In the meantime, the South African Gift of the Givers Foundation plans to drill around 200 boreholes and well points across the Cape Town region over the coming months.

Ali Sablay, project manager at the charity’s Cape Town office, told DW that even though Day Zero has been averted, he continues to get anxious phone calls from schools and assisted living facilities.

“There’s a lot of panic at the moment,” Sablay said.

One of the new boreholes is under construction at Peak View Secondary School, in a suburb of Cape Town. The drill rig sprays the schoolyard with fine wet dust and the noise makes it hard for pupils to focus in class.

But it’s all for a good cause. Principal Oswald de Villiers said he had to cover and padlock the school’s outdoor taps to comply with water restrictions. He keeps a closet stocked with bottled water to ration out to thirsty students.

The borehole will provide the school and surrounding community with drinking water. “That will be a big relief,” de Villiers told DW. “We are in dire need of water.”

The art of saving water

Cape Town city councilor Xanthea Limberg said more than 22,000 private boreholes and well points have already been dug in the city — most of them during the recent drought.

But they don’t represent an unlimited supply of water to be used with abandon. Limberg told DW they should only be used before 9am and after 6pm, on just certain days of the week, for a few hours at a time.

“At the moment there’s no real coordinated and integrated management plan,” she told DW. “That presents a risk to a cumulative impact of over-abstraction of aquifers.”

Meanwhile, the city is getting creative with ways to scrimp and save. It published an album of “2-minute shower songs” recorded by local artists, to encourage residents to speed up their showers. Chefs have taken up the challenge of waterless cooking with a series of pop-up dinners. And at a water-planning conference in downtown Cape Town, jugs of murky grey water stood in the bathrooms, to be used to flush toilets.

If recent months have made Cape Towners conscious of their water consumption as never before, they may be at the forefront of a global trend.

Preparing for a drier future

According to a recent United Nations report, 3.6 billion people — almost half the world’s population — live in areas that are potentially water-scarce for at least a month a year.

Some residents of Sao Paulo in Brazil had their water cut off during a severe drought in 2015, and Mexico City is currently experiencing water shortages, with some neighborhoods unable to access to a constant supply.

Betsy Otto, global director of the water program at the World Resources Institute, told DW “we are certainly seeing the evidence” that climate change is causing more frequent and deeper droughts.

“I think a lot of cities should look at Cape Town and take it as an opportunity to see what they can do differently,” Otto said. “Why is it that we treat water to a very high standard — drinking standard — and then use it for cooling buildings and watering plants? We could be capturing rainwater, recycling greywater — and even wastewater — and using that, in more of a closed-loop system.”

With global temperatures rising, you might expect Cape Town to serve as a warning, spurring authorities around the world to rethink their water systems. But preparing for the worst isn’t often a priority until it happens.

In Cape Town, the precarious state of the city’s water supply has been clear for years, Holmes says. Two decades ago, he was involved in a study of how to develop an aquifer under the Cape Flats, a low-lying area of the city. He also researched the aquifer lying deep under Table Mountain. But nobody was willing to fund the projects, he said.

“The reality is that a few years ago we had record rainfall,” Holmes said.

“And I think if you look at all the challenges that government faces in terms of providing housing, healthcare, education, they’ve got to prioritize.”