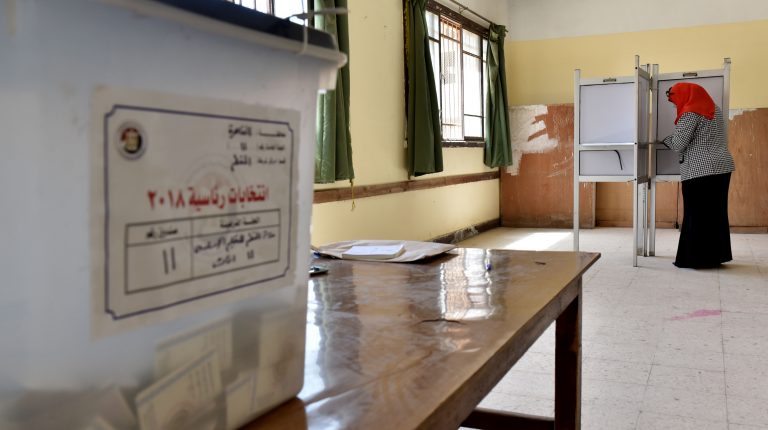 Egyptians continued to cast their ballots in the 2018 presidential election which kicked off on Monday. Citizens across the country voted amid tight security. Over 11,000 polling stations nationwide will again open from 9:00 am to 9:00 pm Wednesday.

Voting started to a slower turnout on Tuesday, as authorities urged people to turn out and participate in the election.

The three-day vote, which ends today, sees sitting President Abdel Fattah Al-Sisi running against just one challenger, Moussa Mostafa Moussa, who is not expected to pose a threat to the incumbent due to his limited popularity.

The governorates of Cairo and Giza witnessed relatively high turnout on the first day of the election, according to the National Elections Commission (NEC). The second day’s turnout was moderate, with a limited number of cars and citizens seen on the streets compared to Monday. The most noticeable participation was from females and elderly citizens, who continued to converge in the streets surrounding polling stations.

Similarly, the governorates of Daqahleya and Ismailia witnessed limited to moderate turnout on the second day of voting, reportedly less than the first day.

On the other hand, in Fayoum, a different scene was witnessed, as turnout levels were higher than the first day.

Various voters told Daily News Egypt that they took to the polls to vote for Al-Sisi in the interest of maintaining stability and restoring order. Most people voting for Al-Sisi defended his economic policies and his political stances, while blaming any hardships on the Muslim Brotherhood (MB), saying it had created instability that led to the flight of tourists and investments, as well as high inflation.

When Al-Sisi became Egypt’s first democratically-elected leader since the ouster of the MB’s Mohamed Morsi in 2013, he won almost 97% of the vote. Nonetheless, less than half of the nearly 60 million eligible voters in the most populous Arab state cast their ballots in 2014.

Celebrations continued to dominate the second day. Across the country, nationalistic songs were constantly played through loudspeakers, while cars covered with photos of Al-Sisi roamed the streets. Al-Sisi supporters expressed confidence in their chosen candidate’s victory.

Ali Hareedi, head of the government’s central election operations room, said that the first day of voting produced a high turnout, “which proves the Egyptian people’s awareness.” He gave no estimate of turnout figures.