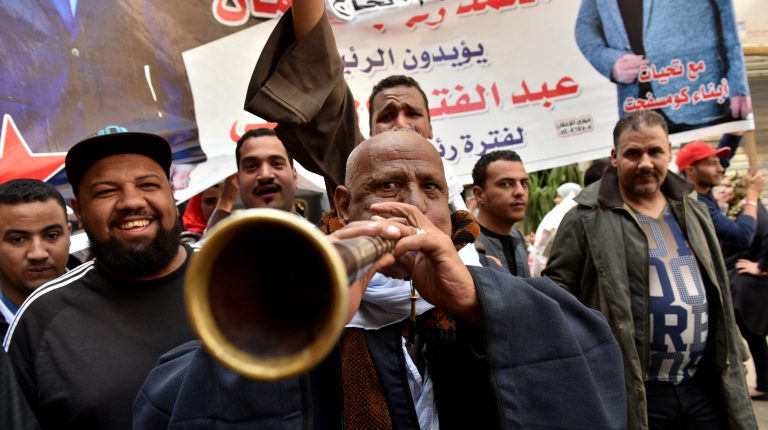 Celebratory scenes in front of polling stations in lower- and middle-class areas are similar in the upper class residential and business-oriented district of Dokki, an area known for hosting several government institutions, newspapers, banks, and local and international companies.

Dokki is also home to several state officials, film stars, politicians, and public figures. On Tahrir Street, a technical institute that serves as a polling station witnessed a heavy security presence, which included members of the media office of the armed forces who offered support to elderly voters, who dominated the polls. Also, the human rights department of the Ministry of Interior offered wheelchairs to voters who could not climb stairs.

One of the judges observing the electoral process at the institute told Daily News Egypt that the turnout has been medium, but expected it to increase as working hours ended and as the weekend approached. On the low turnout of young voters, the judge commented, “where is the role of the members of parliament? Where is the Ministry of Youth?”

Indeed, a common theme that repeatedly arose on the first day of voting at most polling stations was the abundance of elderly voters. Ziad, a current employee at the Ministry of Endowment, said that companies and government institutions should give one of the three voting days off so people can go and vote. “Not all the people who work in Cairo live in Cairo. The same with Alexandria and Giza. Also, schools should be off, so parents can be free to go and vote.”

He added, “if the state is smart, they should put discounts on train tickets for people whose polling stations are in faraway governorates. I know two people who should vote in Assiut, but they will not go.”

Moustafa, a journalist at a state-owned newspaper who refused to give his last name, told Daily News Egypt that security forces have been understanding and cooperative at polling stations where celebrities are expected to show up. “We receive emails and messages that so and so is attending, so we get stationed there.”

However, Moustafa said, at polling stations where there was less turnout, there have been some restrictions by security personnel. He stressed, “the press should report the truth, whatever it is. Some stations will be empty, but others will be busy. It is normal.”

Meanwhile, a judge at the Al-Shaheed Ahmed Abu Al-Dahab School told Daily News Egypt that security forces have so far been successful in securing the electoral process. When asked about what occurs if the judge is suspicious of a person, he answered that although the police and army soldiers are forbidden from entering the polling stations, they, based on orders from the judge, are allowed to enter if any danger is seen or suspected.