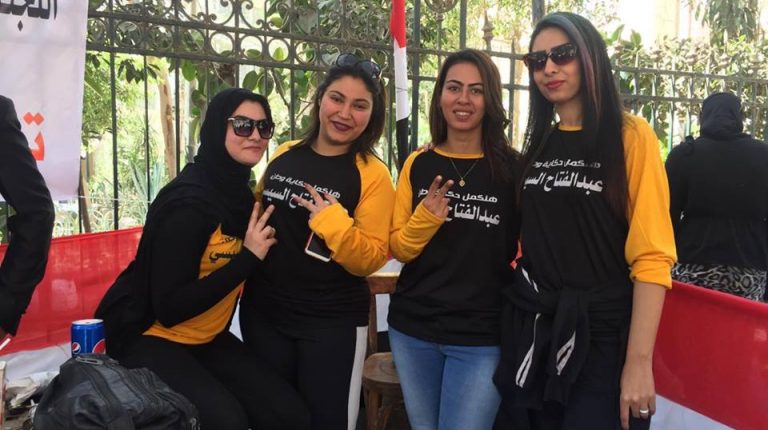 Polling stations in the densely populated Ain Sham district of Cairo began preparing for the presidential election on Sunday night, as several locals celebrated the arrival of army conscripts and officers who came to secure the perimeters of the lower-middle class area’s polling stations. The district’s population includes around 615,000 civilians and includes six main neighbourhoods. Daily News Egypt monitored the electoral process at six polling stations in the district.

On Manshyet Al-Tahrir street, one of the main roads, elderly citizens and a young man argued in Al-Anwar Cafe in the east of the Ain Shams district, underneath a big poster that read: “the owners and workers of Al-Anwar Cafe support with all love President Abdel Fattah Al-Sisi for a second presidential term.” The older man, a pensioner named Gamal, was trying to convince the young man, Sameh, that participating in the election is important and is “a civilised act,” while Sameh said that decision making in Egypt is already controlled by a few people, arguing that electoral democracy is no more than an efficient tool.

Gamal said he will spoil his ballot , as he sees both candidates as unappealing to his political taste. “I am 65 years old. I saw all presidents that have ruled Egypt. The current one is not the best, but he is better than the Muslim Brotherhood. I hope there are alternatives, but there are none. So, I will go but nullify my ballot.”

Gamal’s point of view is different from the majority of elderly voters, who proavtively participated in today’s voting. Morsi, a car repair craftsman, told Daily News Egypt that participating in the election “is a national duty to continue the development of the country.”

“I personally think those who will boycott are traitors of the nation,” he asserted, repeating a nationalist sentiment that has been repeated by several vocal pro-state media outlets and figures.

Another polling station in the Matariya Azharite Institute for Girls witnessed considerable attendance. A judge inside the polling station, who spoke on condition on anonymity, said that most of the voters were females and older men, and mentioned that all of the voters know their rights and are familiar with the process.

One of the voters was 53-year-old school headmistress Ebtesam. She told Daily News Egypt that she is voting so “my grandchildren can have a better future and can live in prosperity.” She said that she works at a private school and that she gave all its employees half a day off so that they can go and vote.

Commenting on opinions that there is no real competition in the election, she said, “how come there is no competition? The candidacy has been open for months. Any candidate with the suitable papers could have gotten in.”

Outside the institute, a disc jockey was loudly playing nationalist songs praising national megaprojects implemented by the current government and President Abdel Fattah Al-Sisi. Despite that, the judge inside the polling station denied that any violations were taking place in the institute’s vicinity.

As voters lined up outside Mohamed Abdu School and one of the elderly voters fainted, a truck with microphones roamed the street holding up banners calling citizens to “participate”. The campaign was organised by the local municipality of Ain Shams, with some of the campaign coordinators stepping out of the truck and distributing small Egyptian flags.

Niveen, a housewife, went to vote at the Mohamed Abdu School, wrapping an Egyptian flag around her body. She said that the young generation is not as cooperative as it should be. “They complain that they are not included, but when the real challenge begins they are nowhere to be seen,” she said.

Standing at the street corner of Mohamed Abdu School was 29-year-old engineer Ashraf, who was on his way to buy his daily stock of cigarettes. “I do not feel that my vote will make a difference,” he said, adding that he is still considering whether or not to vote.

“There should be more inclusion of young people and I am not talking about several or even two hundred pro-state young men and women being sent to Sharm El-Sheikh to discuss problems that are in Cairo,” he complained.

Sameh, the young man who said he will not vote, told Daily News Egypt that he thinks the government is repeating the same mistakes of previous regimes, such as only mobilising older people and relying on nationalist discourse to attract voters.