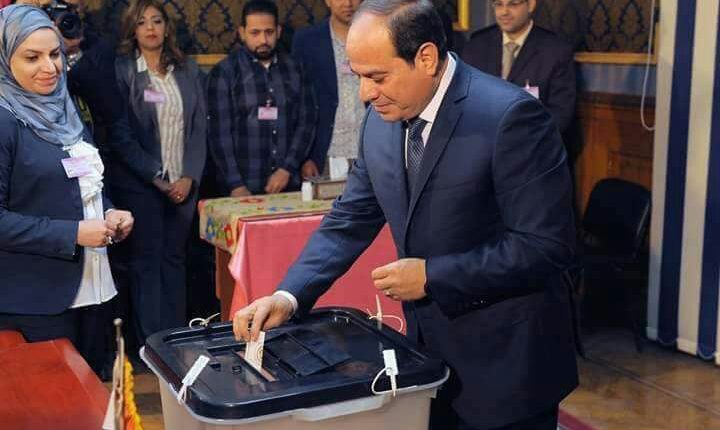 As the Egyptian presidential election kicked off, Mohamed Barakat, 45, stood behind the counter at his small grocery shop in the middle-class neighbourhood of Agouza debating his colleague on whether or not they should vote. “I will vote,” Barakat proclaimed. “Four years ago, there were no roads, no bridges, and no infrastructure. Now, Al-Sisi has changed all of this, creating a national road network across Egypt.”

Yet, Barakat was unable to convince his younger colleague. “Infrastructure and megaprojects did not improve my living conditions, but they became even worse,” he argued, adding that infrastructure will not help him save to afford the expenses of marriage.

Even amongst the supporters of incumbent President Abdel Fattah Al-Sisi, debates continued. Some believe that their votes will not make a difference, citing a virtually certain win for the president.

On the other hand, some chose not to vote, saying they would rather stay away from the polling stations. They believe that their ballots will have no impact on the final results. Boycotters claim the election is just a facade, versus others who are determined to continue supporting Al-Sisi’s plans and projects.

For three days, Egyptians will cast their votes in the presidential election that is likely to be won by Al-Sisi, giving him a second, and last, term in office.

Expectations for turnout have yet to be declared. When Daily News Egypt surveyed polling stations in Agouza, it found some stations full, while others were seeing little to no turnout. Most of the voters were females during the time of the survey. Celebrations were held outside the stations, where cars played loud nationalistic music and people swayed to the rhymes outside, wearing t-shirts with Al-Sisi printed on them.

Moreover, Daily News Egypt spoke to people of different social classes for an hour in the afternoon to review their opinions.

“I will vote for Al-Sisi, as he is the sole candidate,” said a 49-year-old deliveryman who refused to give his name.

The deliveryman complained that his biggest concern is the economic condition. “I have four children who have to work to help the household. We are suffering from an unstable financial situation. I work in the morning and on night shifts—but it’s still not enough,” he said.

Others, though not against Al-Sisi, may not vote. When asked about their chosen candidate, they would laugh at “the rhetorical question,” as one of them put it.

Mervat Ibrahim, 45, an assistant in a small pharmacy, said that she is going to vote for Al-Sisi, not because it is her own choice, but for the lack of another option.

“We demand the president to look out for the lower and middle social classes, curb inflation of prices, and offer more work opportunities,” she said, complaining that the president is exerting hard work for the country, but without addressing the harsh economic conditions.

Mahmoud Abdel Kareem, 24, owner of a food cart on a side street, said, “voting in the election won’t help me to get my project licensed, and I will continue running from police, because the state does not recognise such projects.”

Some citizens decided to boycott the election following the events that preceded it, as presidential hopefuls left the race, some willingly some not, which discouraged hopes for any realistic competition.

Noura Osama, 25, a lawyer, said, “I will boycott. This is not a real election; there are no competitors. Everywhere in the world, during elections, there should be candidates with different ideologies, ideas, and clear electoral programmes so citizens can with full freedom choose their preferred candidate.”

“I don’t see it as an election; it’s a form of continuing swearing allegiance,” she said, adding, “the election is just a fictional race between the current president and an unknown candidate, so this is invalid.”

A door attendant in his mid-thirties, who spoke on condition of anonymity, said, “I will boycott the election. The available options are not satisfying. Even for Moussa Mostafa Moussa, I didn’t see or hear that he has a really proper electoral campaign; he was just an ‘extra’ to save the day.”

Regarding the current president, he commented, “I have not benefited from his megaprojects nor social services. When I applied for one of the social protection programmes, I got rejected, although I don’t have a stable income or properties.”

“If Al-Sisi is going to run for a second term, I want to tell him to please stop the injustice and look into the conditions of low-income citizens,” he concluded.

Mamdouh Mohamed, a lawyer in his late 30s walking on Dokki Street, said that he will boycott the election, justifying that by saying he did not see, during the past four years, any progress in the country that addressed him. He questioned why the poverty rate did not improve and why the neediest people are still suffering, adding, “so where are the achievements the media is speaking about?

When asked about the rival candidate, he said that he did not find any advantage in Moussa’s programme or even in his career.

Gamal Abdel Fattah, 60, said, “I voted for Al-Sisi to give him the chance to follow up on all what he has implemented in his first term. Al-Sisi is a committed leader to his work; he never changed his stances; all his pledges were seen on the solid ground, so why not to vote for him?”

He continued, “Moussa is a good candidate. If Al-Sisi was not a presidential candidate, I would have chosen him. Anyways, thanks to him for helping the election go well and not resorting to a referendum due to the absence of any other candidates.”

Salma Sabawaay, 26, a marketer working for a private advertising agency, said, “I will vote for Al-Sisi, because I’m convinced of giving him a chance for a full eight years and seeing what will happen. I also see that there are slight changes in the country, especially in street infrastructure; I know that it is not something major, but it’s still an achievement.”

Ihab Raafat, 50, owner of clothes factories in Sixth of October, said that he will certainly vote for Al-Sisi for a second term, adding, “Al-Sisi is an honest person. He made a lot of improvements.”

“We are suffering economic issues, but this is normal if we really want changes. This country remained for the five years that followed the revolution of 2011 without hard work or production, which resulted in many failures. Al-Sisi is working hard to improve all these mistakes. He is really building, and we have to bear the suffering for a good Egypt,” he said.