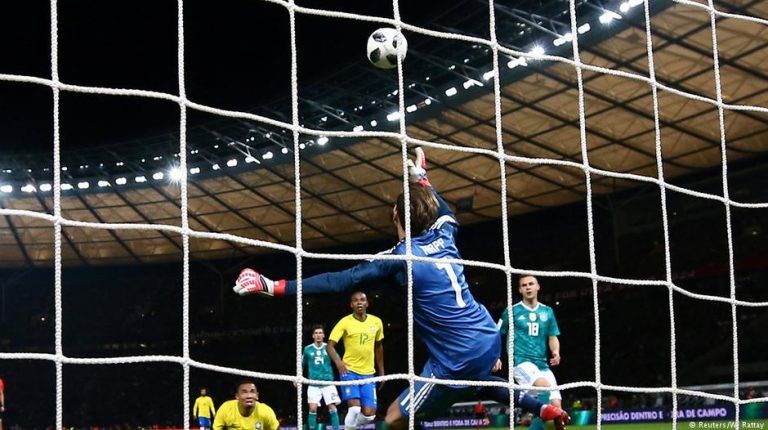 Brazil gained revenge for their 2014 World Cup hammering, but disappointing Germany bore little resemblance to the heroes of Belo Horizonte. Goalkeeper Kevin Trapp may have blown his chances of going to Russia.Kevin Trapp – 4

The Paris Saint-Germain goalkeeper has only made nine appearances this season, and it showed when the 27-year-old was almost closed down after hesitating on the ball after just five minutes. He should have done better with Gabriel Jesus’ headed opener, which was straight at him, and also flapped at a corner in the second half. A nervy performance that won’t have helped his chances.

Did well to contain Philippe Coutinho for 72 minutes while also providing Germany’s only attacking threat down the right. Cleared Dani Alves’ dangerous second-half cross with a vital back-post header in the second half Another mature performance from the Bayern Munich youngster.

Stood up the tricky Gabriel Jesus well after 15 minutes, focusing on the ball despite the Brazilian’s step-overs and taking the sting out of the attack. But opted to go wide to block the cross in the buildup to the opening goal and his absence in the center was punished.

A proud occasion for Germany’s Berlin-born captain, and he cut a composed figure early on, demonstrating his range of passing out of defense in both directions and with both feet. But he was caught ball-watching for the opening goal as Kimmich was left to deal with two Brazilian forwards on his own.

Also culpable in the defensive mix-up for Brazil’s opening goal. His retreat back into a defensive position took him too central, leading Rüdiger to go wide to try and block the cross. Plattenhardt ended up in no-man’s land as Gabriel Jesus headed home.

An uncharacteristically quiet game from Madrid’s midfield maestro. Whether perhaps wary of his partner Gündogan’s difficulties or neutralized by Brazil’s aggressive pressing, Kroos never got his passing metronome working.

Replacing Sami Khedira, the Manchester City man was often caught out by Brazil’s direct forward passes as the visitors looked to move the ball quickly through midfield. Crucially lost possession leading to the opening goal.

Struggled to make his mark on proceedings in the first half and was replaced by equally ineffective Julian Brandt in the second. Disappointing from the current Schalke and future Bayern man.

Guilty of a trick too many on occasion when a cross or shot would have been a better option. Otherwise linked up promisingly with Draxler until he was replaced by Lars Stindl in the second half.

Combined well with Leroy Sane in the first half as the pair injected pace into Germany’s attacks with quick, precise return passes — a dangerous combination and a pacier alternative to Germany’s other attacking midfielders, such as Mesut Özil. It was Draxler who during injury time forced Brazil goalkeeper Alisson into his only save of the game.

Caught offside a couple of times in the opening 30 minutes, but otherwise anonymous and lacking support. Replaced by Sandro Wagner after an hour.

An immediate presence in the Brazil box, using his immense physique to attack crosses from left and right. Wagner offers a potentially game-changing plan B and looks an increasingly sure bet to go to the World Cup

A speculative shot over on 80 minutes, which may well have been his only touch.

Replaced Goretzka, but didn’t represent an improvement. Has the ability to open up defenses, but didn’t show it here.

A textbook sliding tackle in the penalty area to stop Douglas Costa with just over 10 minutes remaining. Perfectly timed. Joachim Löw has a selection headache at the back.

Introduced too late to have much of an impact. Given how deep Brazil were sitting by the end, it didn’t suit his game.