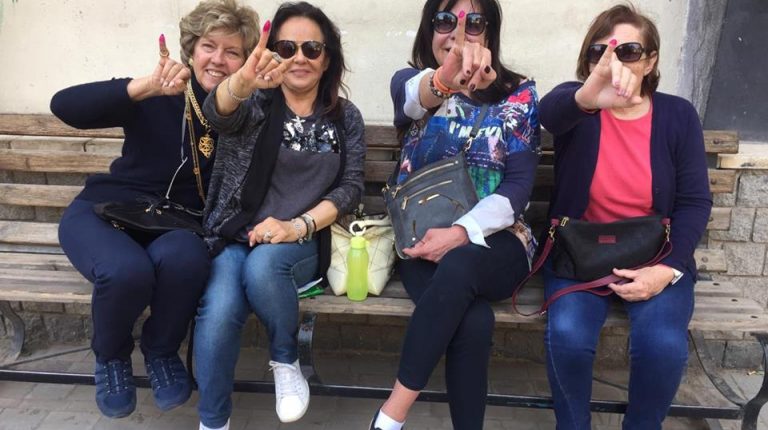 Egyptians headed on Monday to polling stations, to cast their ballots on the first day of the 2018 presidential election, with a choice between two candidates: incumbent president Abdel Fattah Al-Sisi and the head of El-Ghad Party, Moussa Mostafa Moussa.

The voting started on Monday and will end on Wednesday. The 2018 presidential election is the third of its kind since the 25 January revolution of 2011.

In Zamalek, the upscale Cairo neighbourhood, polling stations witnessed limited to high turnout on the first day of voting. The first polling station Daily News Egypt surveyed, based at Helwan University’s Faculty of Fine Arts, was dedicated for women.

Amr Sherif, head of sub-station number four, said the turnout was very good at his station during the first day and that most voters were elders. However, at station number five, its head Karim Al-Qadi said that it witnessed high turnout from all generations, not only the elderly, but also the younger generation. He added that 3,930 people are registered to vote at his station.

Inside polling places, it is easily noticeable that most voters are older women belonging to the middle or high classes. One of the voters, Mounira, 47, told Daily News Egypt that she came to the polling station to cast her ballot in support of  Al-Sisi and to “protect the nation.”

Outside the polling centre, there were dozens of girls and women dancing to nationalistic songs that encouraged voting and voiced support for the Egyptian Armed Forces. One of those women was actress Laila Ezz El-Arab, who cast her vote at the station, saying she was sending a message to the whole world by voting and supporting the state. Ten girls were sitting on the ground outside the station wearing t-shirts in support of Al-Sisi, while photos of Al-Sisi were notably visible surrounding the station.

At another polling station in Zamalek, the Zamalek National School, which is dedicated to men, a number of men danced outside it carrying Egyptian flags and photos of Al-Sisi in their hands. The head of the station refused to disclose any information or even to speak with reporters. Turnout at the station appeared high and most voters were older men.

In front of the station there was Hesham, a young man sitting down, busy with his laptop placed on a desk. He said that he is a volunteer, not affiliated with any candidate’s campaigns, and only helping voters to find their polling station.

In the city of Sheikh Zayed, there was high turnout at the two polling stations. The station at Sheikh Zayed Secondary School, according to Gamal Abdel Aal, head of polling station number six. He told Daily News Egypt that all generations were interested in voting, not only older people. However, at the next polling station, number five, its head Abdulrahman Abdul Khalek said that most of voters were elders.

In the city of Sixth of October, it was a mostly normal day, as most of its residents belong to other governorates, particularly Fayoum, Beni Sueif, and Minya, in addition to northern governorates of the Nile Delta region. According to Ayman, who is from Minya and works as a tuk-tuk driver in Sixth October, some of them find it too hard to leave the city where they live and work to go to their hometown just to cast their ballots.

He added that in the Bashayer and Tawasoat Shamalia districts where he lives, there are no polling stations; so if you want to vote, you will have to go to one of the two polling stations in the 10th District.

In front of Osama bin Zaid school in the 10th District, Saad Mohie, a teacher, said that he cast his vote in support for Al-Sisi to combat “evil people” and for the sake of the nation and the army.

Turnout at that station was very limited; it was almost empty.

Head of Middle East Organisation for Peace and Human Rights Abdel Fattah Hamed told Daily News Egypt that he visited 10 polling stations in Al-Sayyeda Zeinab, Abdeen, Downtown, Dokki, and Zamalek, where he spoke to DNE. He believes that some stations witnessed average turnout while other ones witnessed high turnout.

Hamed explained that the majority of voters are elders, and that slums witnessed higher turnout rates compared to upscale districts such as Zamalek. He commented that this year, most polling centres are on ground floors, which is good for people with disabilities.