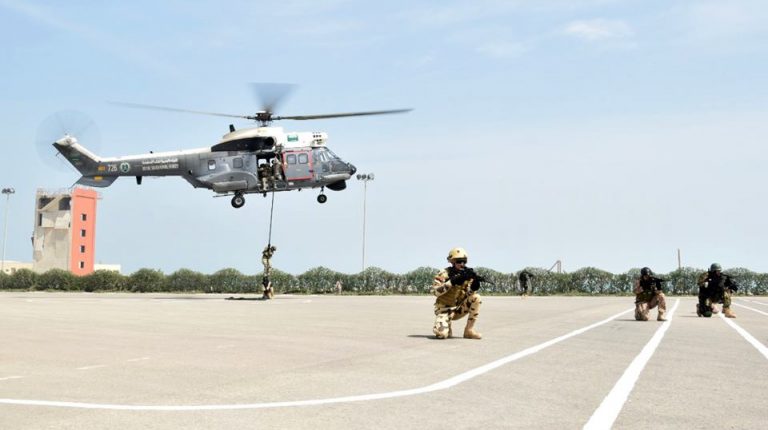 The Egyptian Armed Forces continued on Wednesday the major joint military drill, Gulf Shield 1, which kicked off in Saudi Arabia earlier this month, with the participation of ground, naval, and air troops from countries of the Gulf Cooperation Council (GCC) as well as other nations.

Egypt’s military stated, in a statement, that it is participating in the exercises with marine troop, paratrooper, and commando (sa’ka) forces, as well as military police, alongside the significant participation of forces and monitors from 23 countries.

“The drill is one of the biggest joint exercises in the region, which provides a rich environment of mutual tactical and operational experiences, aiming to ensure the readiness of joint troops, to plan and implement joint land, naval, and air missions to protect vital interests, combat terrorism, and confront threats that harm the security and stability of the Gulf and Middle East,” the Egyptian military statement read.

It added that the early stages of the drill included the arrival of troops from the armed forces of different countries to training locations, conducting lectures on consolidating fighting concepts, exchanging training expertise among troops, and coordinating efforts to fully benefit from the drill.

The exercises, organised by Saudi Arabia’s Ministry of Defence, kicked off on 18 March in the kingdom’s eastern region with the participation of military forces from 23 countries as well as Riyadh’s, and they are scheduled to last for one month, according to the Saudi Press Agency (SPA).