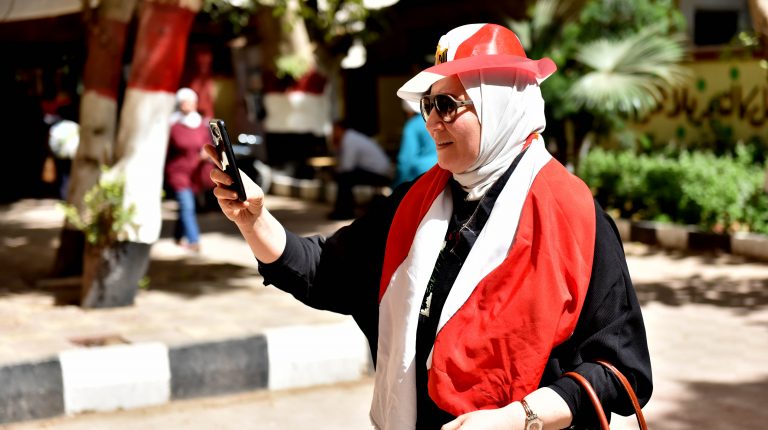 As Egypt’s presidential election concluded on Wednesday, local and international media coverage closely followed the three-day poll, particularly keeping an eye on voter turnout. On Tuesday, most local newspapers’ front pages were praising the turnout and showing photos of voters and people waving the country’s flag.

The two candidates in the election are sitting President Abdel Fattah Al-Sisi and head of El-Ghad party Moussa Mostafa Moussa.

The local media and press focused on the environment surrounding the election, covering crowds singing and dancing in front of polling stations and urging people to vote.

One enthusiastic talk show host wore a t-shirt while presenting his programme, which showed both candidates’ pictures and a caption in Arabic asking people to participate in the election.

Egyptian TV stations were covering the election all day, interviewing a number of local and international observers. Daily evening talk shows wrapped up each day and covered the last hour of voting at polling stations, as well as the closure of ballot boxes.

As for international outlets, the State Information System (SIS) was particularly monitoring foreign media coverage, saying that in general, it has been balanced. “However, some foreign media outlets chose once again to go back to what they published on the first day of voting that the turnout will be the barometer of the success of the process, offering an overall analysis of the current political landscape and future outlook as well,” the SIS said on Wednesday.

Reuters published daily coverage stories, reporting different opinions from voters who either supported Al-Sisi or voided their ballots. It reported slow voting, amid certainty that the president will sweep the election, and that the government was seeking a high turnout.

CNN produced a video where its reporter was reporting from inside and outside polling stations, also talking to some voters, pointing out the noisy street celebrations and nationalist songs played through loudspeakers.

For its part, The Telegraph noted little participation of young people.

AFP, Le Monde, and Le Figaro also followed the election, emphasising that Al-Sisi is certain to secure a second term. Before the election, Le Figaro published an article titled “Moussa, a discreet opponent”, pointing to his last-minute candidacy and documents submission.