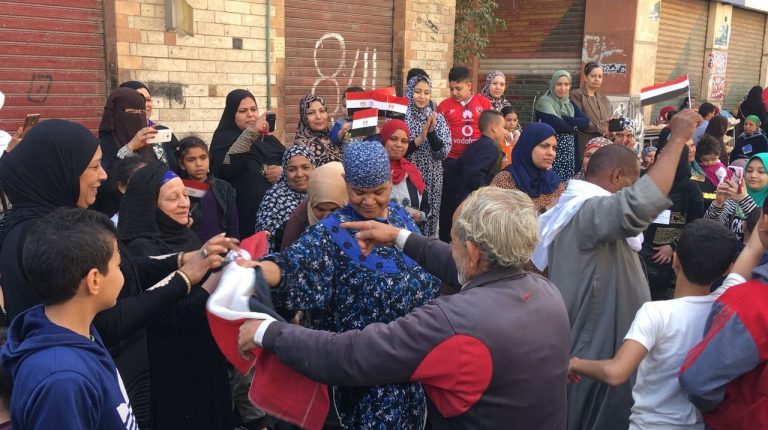 Observers say Egyptian women may have represented the largest share of voters in the presidential election that began on Monday and ended on Wednesday, between sitting President Abdel Fattah Al-Sisi, who is almost certain to secure a second term, and a little-known El-Ghad Party leader Moussa Mostafa Moussa.

Scenes from polling stations across the country showed women of all ages from impoverished social classes dancing, singing, and chanting for Al-Sisi. Most of them were expressing their support for their candidate as they were surrounded by men, despite sexual harassment being a pronounced issue regularly faced by women in Egypt.

Generally, women in Egypt complain of not enjoying safety and freedom when they head to work, walk on the streets, attend football matches, or even participate in demonstrations. They are subjected to sexual harassment, abuse, and sexual violence, often verbal and sometimes physical. However, when it comes to voting, especially in the presidential election, the situation changes. Men give females the space to do whatever they want, and nobody judges or harms them, it has been observed. Meanwhile, security forces and police personnel, who are widely reported by women as unhelpful when reporting sexual harassment, guarded and protected them.

“I think Egyptian women became more confident about their impact in changing political situations in the country, especially after 25 January 2011 and 30 June 2013. They realised how their participation is significant and effective,” Sawsan Al-Fayed, a professor of political psychology at Ain Shams University, told Daily News Egypt. Al-Fayed added that women decided to cast their ballots in the 2018 presidential election after they noticed how some young men decided to boycott the election.

On why some women choose to dance in the streets after voting, she suggested, “maybe this emerged due to the genre of music; patriotic songs and national anthems which urge people to vote, mainly motivating them to dance too,” adding, “some of these women are moderately educated and belong to certain social classes, so they don’t have other ways to express their opinions and happiness.”

DNE called the number listed on one of those posted advertisements. The person who answered said women and men would be paid EGP 50 to head to Kattameya to vote. “You will find buses with ‘Qaitbay’ written on them, join the people, vote, and then leave,” he said. Another such listing was contacted. The person asked for a photograph of the female wishing to participate in order to approve or reject her. “Please send us your photos. We have t-shirts and you will be paid EGP 150 for the evening shift, from 3:00 pm to 9:00 pm,” he said, but declined to say whether they wanted the women to vote or not, but said they would be stationed outside polling stations.
“The celebrations you see are just an early victory of Al-Sisi, many of them are systematically held by businesspersons or artists who support him, to cover up the below average turnout, and that people are apathetic to participating in the election,” Hassan Nafaa, a professor of political science at Cairo University, told DNE.

“Plenty of people, including women of lower socioeconomic segments, feel obliged to celebrate, as they are paid to do so, or in fear of any consequences,” he added. “However, Al-Sisi still enjoys strong popularity, but I believe most of his supporters mainly focus on voting for the candidate they support, not celebrations.”

Meanwhile, a witness told DNE, on condition of anonymity, that they heard a young man telling his friend that he was offered money to make rounds on a pickup truck, dancing and chanting on the streets to the music blasting from the truck’s loudspeakers. The witness said the payment for men was EGP 200 and EGP 400 for women. DNE could not independently confirm the allegations.

Dancing to celebrate elections notably emerged following the 2014 presidential election, in which Al-Sisi won his first term in office, after the ouster of his predecessor Mohamed Morsi of the Muslim Brotherhood. Al-Fayed suggested, “women resort to dancing to express their happiness at disposing of the Muslim Brotherhood’s ideology in politics and regaining their freedom. Women are smart enough to realise how Islamists used women for political mobilisation.”

The professor concluded that what makes dancing and celebrating acceptable in a patriarchal society like Egypt is that women do it for a political purpose, not for “show” or to express their “femininity,” saying, “I think this is the reason behind men and society’s tolerance of women in these cases.”