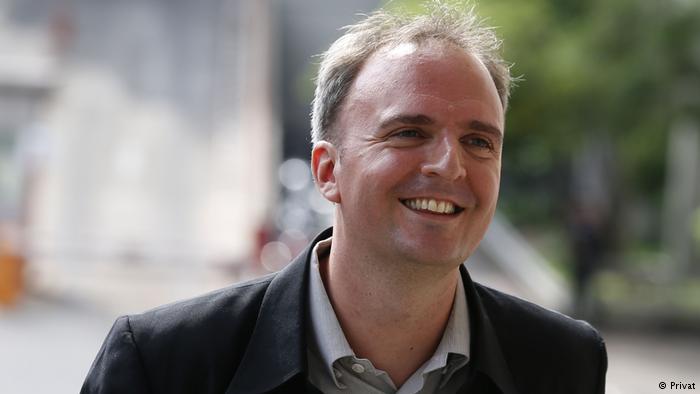 The case of a labor rights activist ordered to pay hefty damages by a Thai court after exposing abuses of migrant workers highlights Bankgok’s failure to deal with the issue. DW spoke with those involved in the case.A mixture of disbelief and disapointment descended on the Prakanong Court in Bangkok on Monday, March 26, after it ordered British human rights activist Andy Hall (main picture) to pay 10 million baht (€260,000, $315,000) in damages for defamation to a Thai company — Natural Fruit — he alleged had abused migrant Myanmar workers.

“This verdict casts a dark shadow over recent positive progress the Thai government and Thai industry have made to improve migrant worker conditions,” Hall, currently in Nepal, told DW.

Hall left Thailand in 2016, citing intolerable legal harassment after another company, poultry producer Thammakaset Farm, sued him in a different case. He doesn’t know when he might be able to return to Thailand, though he has filed a countersuit against Natural Fruit.

Since taking power in a 2014 coup, Thailand’s ruling military junta has undertaken campaigns to regulate the foreign workforce, driven in part by international pressure — the US downgraded Thailand in its annual Trafficking in Persons report to Tier 3, the lowest possible status.

But the reputation of many Thai companies remains poor, dogged by persistent allegations of labor abuse, especially in the fishing and seafood industries.

A case in point

The court case against Hall relates to his report — “Cheap Has A High Price” — for Finnwatch, as well as an interview he gave to Al-Jazeera English television in Myanmar in April 2013. Hall accused the company of committing grave labor rights abuses, such as not paying the legal minimum wage, using child labor, confiscating passports as well as forced and often unpaid overtime.

According to Natural Fruit, however, Hall intentionally harmed the reputation of the company by speaking and publishing false information. The case charges carried a maximum penalty of one year in prison. The company declined to reply to a request to comment on the case.

In October 2014, the court dismissed the charges on the grounds that the prosecutor had failed to participate in the investigation process.

The Office of the Attorney General and Natural Fruit appealed the legality of the dismissal to the Appeals Court in January 2015, which in September 2015 dismissed the appeal on the grounds of flawed unlawful interrogation processes. But Natural Fruit and the Office of the Attorney General did not give up and made a second appeal, leading to the latest verdict by Prakanong Court.

“We are absolutely appalled by the ruling. It comes as a shock,” said Sonja Vartiala, executive director of Finnwatch. “This decision restricts freedom of expression and prevents exposing human rights violations. It is difficult to grasp,” she went on.

“The Thai justice system continues to be used to swamp human rights defenders with endless court cases. It’s an effective way to prevent all public criticism towards companies,” she added.

One of several cases

A coalition of 87 civil society groups and members of the European Parliament sent an open letter to Thai Prime Minister Prayuth Chan-ocha in September 2017 saying: “The prosecution of migrant workers and their advocates under criminal defamation laws for reporting violations of Thailand’s labor law violates Thailand’s international legal obligations and business’ obligations to respect human rights under the UN Guiding Principles framework.”

The letter was a reaction to criminal defamation charges brought by the company Thammakaset in October 2016 against 14 poultry farm workers from Myanmar who alleged the company had violated their rights.

They claimed the firm had paid less than the minimum wage, failed to pay overtime wages, restricted workers’ freedom of movement and confiscated their identity documents, including passports, violating Thailand’s Labor Protection Act.

Hall also faces criminal defamation charges related to this case. If convicted, he could potentially be sentenced for up to seven years in prison and fined up to 300,000 baht. Likewise, the 14 migrant workers could face up to one-and-a-half years’ imprisonment and/or fines of up to 30,000 baht for criminal defamation.

“The Thai government should recognize that the country’s reputation and economy are better served by ending the mistreatment of migrant workers and ensuring compliance with international labor standards than by embracing a legal system that hands down ridiculous damage awards,” Brad Adams, Asia director at Human Rights Watch, told DW.

A report by Human Rights Watch (HRW) in January noted that the Thai government had made improvements in reducing labor abuses in its domestic fishing industry since 2015, but said that many problems persist.

HRW found that abuses against migrant workers include assaults and killings by government security forces and private individuals, extensive use of torture and ill-treatment in detention, sexual abuse, widespread labor rights abuses, and pervasive extortion.

Thailand has an estimated 3 million migrant workers, about 10 percent of its workforce, though the International Organization for Migration (IOM) says it could be between 4 and 5 million.

The country has one of the slowest economic growth rates in Asia, but its minimum wage of 305 baht ($9, €7.50) a day for registered workers is still more than three times the equivalent in Myanmar.

And with an aging society (the workforce is expected to decrease by 11 percent by 2040) it needs migrant workers now more than ever. The government promised in January to increase the minimum hourly wages on April 1 by 5 baht to 22 baht for all workers, including migrant workers, but many migrants work in the shadow economy and are not subject to these provisions.

The politics of silence

The owner of Natural Fruit, Wirat Piyapornpaiboon, is the elder brother of Thailand’s former labor minister and former general secretary of the Democratic Party, Chalermchai Sri-On, who was also the senator of the province in which the company operated. Though there is no evidence of overt political collusion in the case, the relationship between politics, business and migrant workers is clear.

In May 2017, Prime Minister Prayuth Chan-ocha said his government was determined to push businesses in Thailand to be fully in line with the three pillars of the UN Guiding Principles regarding protection [of human rights], respect [for human rights], and reparation [for damage from abuse].

“Thailand has a longstanding policy to respect basic rights and promote the welfare of Myanmar workers in Thailand who play an important role in driving the country’s economy,” Jukr Boon-Long, Thailand’s ambassador to Myanmar, told DW recently.

“The Thai government has introduced a number measures to encourage the legal employment of migrant workers. Registration process of undocumented migrant workers is expected to be completed on June 30, 2018,” he said.

In November 2017, Thailand’s labor ministry set a target for the country to register all migrant workers by March 31 and give them all protection under the Thai and international labor laws, permanent secretary for labor affairs Jarin Jakkapak said in November.

The law imposed criminal penalties on migrants who work without a permit, mandating up to five years in prison and fines between 2,000 to 100,000 baht.

Employers are now often legally compelled to pay fishermen a minimum wage and issue contracts, research by the International Labor Organization (ILO) this month showed. But the ILO also found signs of continuing forced labor despite pressure from retailers to clean up the industry.

A spokesman from the UN Working Group on Business and Human Rights said the group will meet Thai officials in the coming weeks to find out if the government’s measures have been effective.

It is expected to urge Thai authorities to adopt a national action plan on dealing with modern slavery and human trafficking in industries from seafood, to manufacturing and tourism at the end of their visit.

An estimated 425,500 people live in conditions of modern slavery in Thailand, according to the Global Slavery Index 2016 by campaign group Walk Free Foundation.