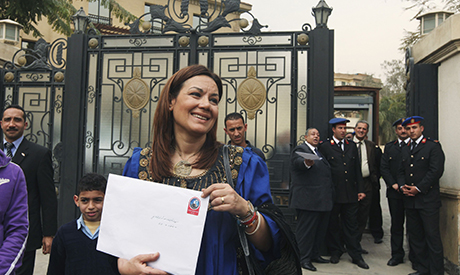 Egyptian women were able to break political taboos throughout history to become empowered politically. They became members of parliaments, ministers (there are currently six female ministers in the cabinet), governors, and many other senior positions in the state, while the year 2017 was announced by President Abdel Fatah Al-Sisi as the year of women.

But the question is whether women tried throughout history to challenge male dominance to reach the highest leadership positions in the state, whether it be running for president or having their names on the list of approved candidates. Have women even sought to become presidential candidates? If so, why did they fail?

The answer is that women in Egypt tried twice in modern history to become formidable figures in presidential elections, but they failed due to the cultural constraints and the distrust in women’s ability to run a state.

The first woman to take the step of running in a presidential election was writer Nawal El Saadawi, who announced in 2004 that she would run for the presidency in September 2005, but she withdrew from the race in July 2005.

People in Egypt were surprised by her withdrawal, then she announced in a press statement the reasons for her decision, saying that constitutional amendments stipulated tough conditions for viable candidates to contest the polls for the first time.

At the time, this was simply impossible due to her opposition to then-president Mubarak’s policies, in light of the dominance of his ruling party over all these councils.

In her press statement, she also complained that Egyptian security services prevented her from holding public meetings, giving lectures, and from appearing on state-run television channels and radio stations.

But the political conditions changed completely after the 2011 revolution, so Bothaina Kamel announced her intention to run in a presidential election, though she was the only woman candidate.

She failed in collecting the required number of citizen endorsements, was not able to win the nomination of 30 elected members of the People’s Assembly and Shura Council, and she also was not able to achieve the support of 30,000 eligible voters in at least 15 governorates of Egypt.

Kamel’s experience declared something very important; that the society itself is the thing or the one that obstacle that has prevented women from running for office and does not recognise their right to run in elections  or to access leadership positions, especially the highest one.

Despite all of this, she announced her intention in 2014 to run in the presidential race, completing the medical examination that is required for the candidates, thus carving her name as the first woman to achieve this step. She then tweeted, “I am mentally and medically fit for the presidency, but the problem lies in the prevailing mentality.”

Finally, throughout Egyptian history, women have been an effective civil force and have played a great role in elections and during revolutions. Also, women forced different governments to make choices based on skills and qualifications rather than gender. But the question remains: when will women be able to change the cultural view of women as weak creatures who cannot make the right decisions to run a state? The answer to this question remains to be seen.