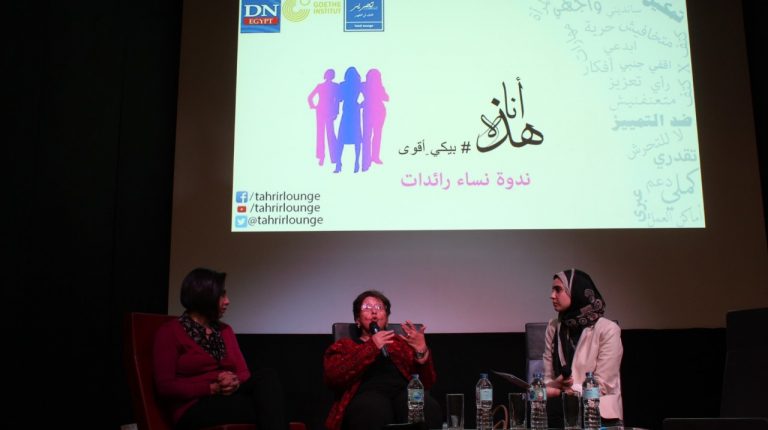 Every young woman wants to achieve success in her personal and professional life, but the path to success can be tricky and navigating it requires being proactive in several aspects of one’s life.

Even though the path to success is always accompanied by many challenges, including the cultural constraints that are defined by society’s rules, norms, and values, there are many leading female role models who have left a mark in history, through their leadership in various fields, challenging all societal constraints they encountered, proving all of society that women can make a difference.

Therefore, Daily News Egypt in cooperation with the Tahrir Lounge initiative of the Goethe Institut, held a seminar under the title Female Leaders to discuss women’s leadership.

Various female leaders who were hosted shared with other women their success stories as a way to encourage them to overcome the challenges that they might face later in life. Along with the topics that were discussed was ways to collaborate to renounce violence against women, resulting in a high probability of having their names written in history books, highlighting their success stories and achievements across various fields.

Among these leaders was the writer and journalist Farida El Nakash and Mozn Hassan, founder and executive director of Nazra for Feminist Studies.

The seminar kicked off with an opening speech by the founder of Tahrir Lounge initiative of the Goethe Institut and the women’s editor at Daily News Egypt, which highlighted the aim of the seminar, shedding light on mechanisms to support women’s strong participation in social and economic life and means to enhance a positive image of women’s role in society.

Afterwards, a movie was screened named “feminism talks” about women and societal issues.

Then the panel discussion started, during which El Nakash talked about her journey in writing. She said that her story started in the Egyptian countryside, as she was born in a village in Daqahleya governorate.

She talked about society’s constraints by which the elders in her village were opposing the education of girls, yet her father insisted on educating his daughters just like his sons and did not distinguish between them and treated them equally.

Later, she talked about her professional career, explaining that she joined the journalism career as she enjoys it very much and was interested in the cultural side of it. The general secretariat of the Egyptian Writers Conference chose her as its first female president for the 32nd session of the conference.

After she graduated from the Faculty of Fine Arts, English department, of Cairo University, El Nakash worked as a journalist at the Middle East News Agency (MENA), then she worked at several media organisations and was the first female editor-in-chief of Al-Ahali newspaper.

She also became a member of several civic and women’s associations and institutions.

She talked about masculinity and the discrimination that women suffer from at work, explaining that she herself suffered from this masculinity, narrating that she used to write many critical articles about books such as “El Haram”, which was written by Yousef Idris.

Moreover, she pointed out that she wrote critical articles, criticising the books and articles of Ihsan Abdul Quddus because of his inferior view of women and portraying them as weak beings who cannot make decisions in their lives.

She continued that her articles gained significant popularity and she was known in cultural mediums, but unfortunately, all the cultural mediums were accusing her of not writing these articles, saying that her brother was the one who wrote them instead, since he was a well-known journalist and critic.

El Nakash narrated a story that proved to her the masculinity and discrimination of men, saying that after publishing her articles, she met Abbas El Aswany, a great writer, who told her that she has a perfect writing style just as men have, suggesting that women are not as good as men at writing.

Moreover, she said that she worked as a journalist at several major institutions in Egypt, adding that, always, when there was an ad in the publication, the editor-in-chief replaced her story with the ad and consequently the first page that was usually cancelled was the women’s page.

Within this context, she explained that the media plays an important role in shaping awareness and creating a state of dialogue. El Nakash added that the media is at the forefront of shaping and conceptualising the stereotyped image of women as inferior weak beings.

She pointed out that the solution for replacing the stereotyped image of women is to search for ways and methods to expand the space of presenting the real models of women based on them being more human and recognised citizens.

The journalist stated that women still suffer from discrimination in all circles, including intellectual ones, explaining that it was no coincidence that the Egyptian Constitution of 2014 issued an article calling for the establishment of a commission against discrimination, pointing out that women are at the heart of the discrimination.

The writer added that there is an uppishness image projected onto women, that they are objects that need care. She further explained that these words are always used by men to justify violence against women, saying that even the personal status law is designed to ensure that women are weak beings that need guardianship, money, and protection from men.

Finally, she stressed that women should have confidence when they face problems at work or in their lives, knowing that they are right and what they demand is a right not a favour.

For her part, the founder and executive director of Nazra for Feminist Studies said that her mother inspired her to become a feminist and was the one who taught her to be independent.

She explained that she founded Nazra in cooperation with some of her friends, as she was interested, since she was a child, in the feminist movement and was interested to learn about the different generations and development of it, explaining that she has a diploma in civil society and human rights from Cairo University and a master’s degree in international human rights from the American University in Cairo.

Hassan was awarded the Global Fund for women’s inaugural Charlotte Bunch Human Rights Award in 2013 and of the Right Livelihood Awards, known as the “alternative Nobel Peace Prize”, in 2016.

Nazra’s founder said that feminism is not a trend that will be ended in one day, pointing out that violence against women exists in the whole world in varying degrees, but the idea is how to deal with it.

Hassan continued that the main problem in Egypt lies in the existence of resistance and permanent denial of the existence of violence against women in Egypt, giving an example that there are many people who deny the existence of female genital mutilation in the country, despite the high record of victims who were forced to undergo the procedure.

On a positive note, she said that after the 2011 revolution, a new generation of young people interested in women’s issues emerged and were interested in reading more about the feminist movement, which indicated the growing awareness about women’s rights.

Also, this translated into a greater indication of the participation of women in the political and social scene, however this participation is still not the desired one.

Hassan said that throughout her work at Nazra, she found that the main problem in facing the violence against women was the lack of feminism awareness of women’s ability to engage in practical life equally to men.

Also, there was another problem that women sometimes unintentionally justify the violence directed towards them.

She gave an example that sometimes she found that the victim of sexual harassment who was talking with her had mentioned that, at the time, she was dressed well and that she was veiled, as if she was saying “I didn’t do something wrong,” or that a wife who suffers from domestic violence says that her husband beat her even though she did not do anything wrong.

She stressed that violence will not change from one moment to the next, but feminists must continue to work and build on what previous feminists have reached, and women need to have trust in their capabilities and to be sure that what they demand is their right.

The seminar ended with psychodrama activities presented by the trainer, Heba Amr. The psychodrama was on women’s conditions at work, with the aim of spreading a positive image and to encourage women to overcome problems at the workplace.

This event was part of the campaign “This is me, by you I am stronger”, which kicked off on 8 March and will last for three months.