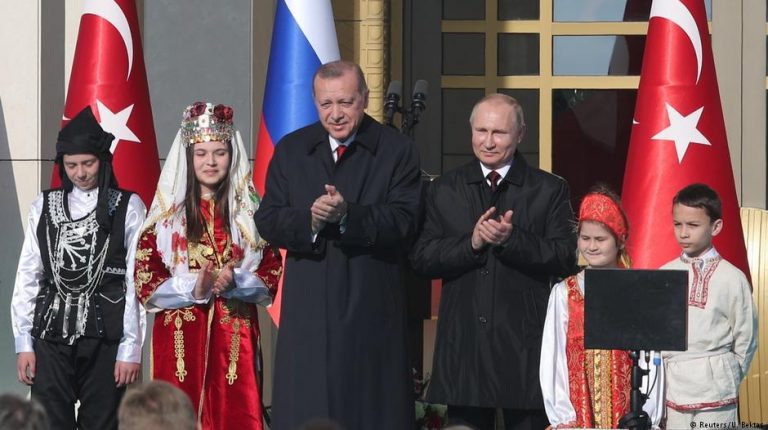 The start of the Akkuyu nuclear power plant is another sign of cozy relations between Turkey and Russia. Turkish, Russia and Iranian leaders are to hold a summit on Syria.Russian President Vladimir Putin and Turkish President Recep Tayyip Erdogan on Tuesday took part in a symbolic ceremony marking the construction of Turkey’s first nuclear power plant.

The joint venture already broke ground once in 2015 before being put on hold after Turkey shot down a Russian warplane along the Syrian border, causing relations between Moscow and Ankara to nosedive.

A U-turn in relations has witnessed the two countries closely cooperate on Syria and expand economic ties.

Putin and Erdogan met eight times last year and spoke often, signaling the two leaders have been able to compartmentalize their differences at a time when both countries face deteriorating relations with the West.

Located in the southern province of Mersin, Akkuyu is expected to meet 10 percent of Turkey’s energy needs by the time all four reactors go online in 2025. The first reactor is expected to be operational in 2023 to mark the centennial of the Turkish Republic.

Russia’s Rosatom holds a 51 percent share in the project and is seeking to sell 49 percent. So far it hasn’t found a buyer after Turkish companies backed out in February. Critics argue the project is not financially viable and electricity prices are too high.

Turkey already gets 53 percent of its natural gas from Russia. The two countries are also building the $12 billion TurkStream pipeline to deliver gas to Turkey and southern Europe, bypassing Ukraine.

The Akkuyu project has come under criticism for increasing Turkey’s energy reliance on Russia. It has also run up against environmental concerns, not least because the nuclear power plant is being built in an earthquake prone area.

Russia and Turkey are also in talks for Ankara to procure the S-400 missile system. The potential purchase has come under criticism from the US and NATO because it is not compatible with alliance systems.

Putin is in Turkey as part of a series of high level meetings. On Wednesday, the two leaders will be joined by Iranian President Hassan Rouhani to discuss strategy in Syria.

Read more: What foreign powers want from the Syrian war

Turkey has been one of the main Syrian rebel backers, while Iran and Russia have supported the regime in Damascus.

However, the three countries launched a serious of talks dubbed the Astana peace process early last year to try to reach a political solution to Syria’s seven year civil war.

Wednesday’s talks are expected to focus on humanitarian aid access and establishing “deconfliction” zones. The sides are also likely to discuss carving out zones of influence in the wake of Turkish military incursions in northern Syria.

The summit comes relations between Turkey and the United States are strained over US support for Syrian Kurdish forces.

Read more: US, Turkey on collision course in Syria’s Manbij