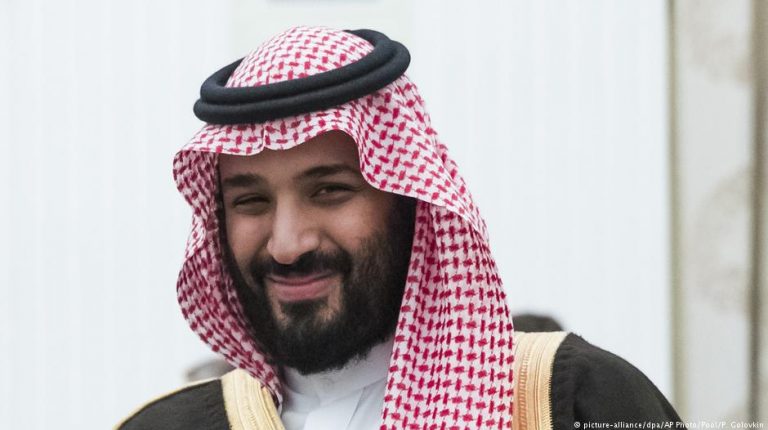 The crown prince told the magazine that Saudi Arabia has no problems with Jewish people. He pointed that Islam's Prophet Muhammad "married a Jewish woman."

The crown prince's statement could signify closer ties between the countries. "Israel is a big economy compared to their size, and it's a growing economy, and of course there are a lot of interests we share with Israel, and if there is peace, there would be a lot of interest between Israel and the Gulf Cooperation Council countries and countries like Egypt and Jordan," he said. Both Saudi Arabia and Israel wish to contain Iran, for example. Sunni Muslim Saudi Arabia sees Shiite Iran as its main rival vying for influence in the region, with Iran playing a role in the conflicts in Syria, Yemen and other nations.

Hassan Nafaa, a professor of political science at Cairo University, told DW that "Iran is the main motivator" behind the changing stance toward Israel. "Saudi Arabia considers its competition with Iran one about leading the Islamic world, with fears that it could be dominated by the Shiites under Iran," he said. Also, both countries fear that Iran could get nuclear weapons. Saudi Arabia would even likely welcome Israel's striking facilities in Iran that could be developing nuclear material, Nafaa said.

Yossi Mekelberg,a professor of international relations at Regent's University London, told DW that Saudi recognition would be very important for Israel in a part of the world that is hostile toward its very existence. "We can see that Israel is a part of the region and that there need to be fair and just negotiations with the Palestinians, but all the old language that says that Israel should be completely eliminated should stop," he said. Mekelberg said Israelis would welcome the statement, while Palestinians "would not be as pleased because they feel that the Israelis are getting recognition from the Arab world without paying the Palestinians necessary concessions in the peace process."

Indeed, Israeli and Arab voices had varied reactions on social media. Elad Ratson, an Israeli diplomat in London, suggested that the crown prince's statement shows that Saudi Arabia backs his country's policies within the region.

Yasser al-Zaatreh, a Palestinian writer based in Gaza, reacted to the crown prince's statement with disdain. "The Zionists have no 'right' to any part of Palestine," he wrote. "They are invaders who came from the corners of the earth to occupy a country and push out their people. This talk of a 'right' is pure nonsense."

Under the Obama administration, US Secretary of State John Kerry made many trips to Israel and Palestine to facilitate negotiations. During the Trump administration, the US has played a less balanced role, declaring Jerusalem to be the capital of Israel — a statement rejected by most of the international community. Now perhaps Saudi Arabia as a regional power has decided to position itself as a major broker for peace. "We have to have a peace agreement to assure the stability for everyone and to have normal relations," the crown prince said in the interview.

Mekelberg said Saudi Arabia was undergoing "major changes" as it revisits policies such as not allowing women to drive and its official stance on Israel. These changes are pushing the country into the 21st century, Mekelberg said. "Instead of sticking to old policies that don't necessarily work, Mohammed bin Salman is re-evaluating them and saying that. at this point in time, Saudi and Israeli interests correlate — and why not recognize it?" he added. "It will put Saudi Arabia in a very good position to be a regional force of advancing peace and to be an honest broker in negotiations between Palestinians and Israelis."

Every evening at 1830 UTC, DW's editors send out a selection of the day's news and features. You can sign up to receive it here.