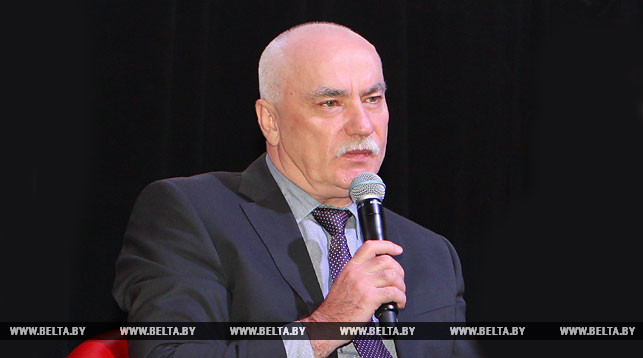 Belarusian Minister of Communications and Informatisation Sergei Popkov said that he was surprised by the Egypt-manufactured mobile phone by Sico, adding, “I had wrong information that Huawei and Samsung dominated the market, so we are really interested in collaborating on the manufacturing programme.”

The minister added, at a press conference organised by the Canadian Egyptian Business Council on Tuesday evening, that the cooperation with Egypt in the IT sector is still at the very beginning, noting, “the political leadership will in both countries encourages boosting relationships, but activating the ideas needs further studies.”

The minister said that his country benefited from working with many Chinese companies in Belarus and can offer expertise to the Egyptian side.

Popkov added that he invited his Egyptian counterpart Yasser El-Kady to attend a conference that will be organised in Belarus from 14-15 May, accompanied by an Egyptian delegation to discuss bilateral cooperation in various areas.

According to a press release by the Egyptian Ministry of Communication and Information Technology on Monday, the Belarusian minister signed an agreement with his Egyptian counterpart in the field of scientific and educational cooperation. Popkov and the delegation that accompanied him conducted a field tour of Smart Village, visiting various Egyptian IT developments.

Popkov said that the national company Beltelecom owns about 85% of the country’s landline market because the private sector finds it difficult to compete in the market. However, foreign and local companies own major shares in mobile companies.

“Some companies hold 100% shares of the mobile companies,” he said, clarifying that four companies operate in the mobile market in Belarus.

Many Russian companies helped modernise the communication market in Belarus and execute implementational plans to develop the market in 2007, added the Belarusian minister.

“The market faced the global crisis with the fewest loses and then developed very well,” said Popkov, adding that many European companies left the Belarusian market, which created an opportunity for the Chinese to enter the market and expand.

Meanwhile, Belarusian minister added that his country may study the possibility of recognising cryptocurrencies in the future, according to global updates, adding, “until now, we deal with the issue carefully and have not recognised the crypto currency yet.”

The minister said that many countries took the suitable decision regarding them, adding that the Japanese government supports cryptocurrencies, while the Chinese government stands against them.