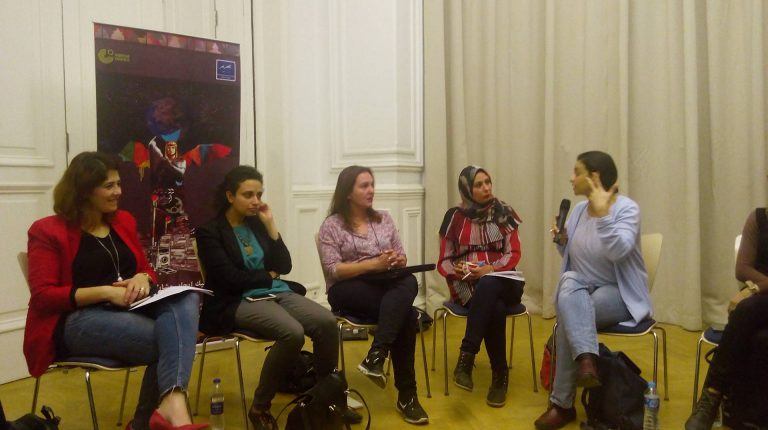 Nihal Yousef Sharara, acting managing director at Ahead of the Curve, said that a study was conducted by her organistaion, in collaboration with HarassMap, for analysing women’s conditions in some of the series presented in Ramadan 2016-2017. It found that women are always portrayed as victims and weak creatures.

Sharara added that the study also stated that the dramas portrayed the main role of women as taking care of their homes and their children.

She continued that the study revealed that the most common professions women are portrayed as occupying are the jobs of teacher, nurse, and secretary.

Meanwhile, “the same study showed that men are controlled by their sexual desires, they are always characterised by violence and irresponsibility, and their only role is taking care of the financial burdens of the family,” according to Sharara.

Commenting on this study, critic Ola Al-Shafei pointed out that women are more oppressive than men, because it is the mother who raises her son on the concept that he is better than his sisters, assuring the existence of a lapse in education, which reflected on the dramas.

Al-Shafei pointed out that art alone is not the only reason for the low status of women, but there are many other factors, such as education and other forms of media.

She assured that there are some attempts in the cinema and drama scene to discuss issues of women in a decent, realistic, and fair way for them, especially the attempts of the late director Mohammed Khan and writer Maryam Naoum, calling for the return of the state production of dramas.

Al-Shafei also assured the importance of women in supporting each other.

The remarks came on the sidelines of the events of the This Is Me, By You I Am Stronger campaign that was launched by Tahrir Lounge of the Goethe Institut, with the aim  of raising awareness of women in the workplace, the challenges they face, and to shed light on successful female role models who overcame difficulties and challenges that they encountered at work, becoming a source of inspiration for other women in different fields.